Jamey Simmons Is Beaming With Confidence

After Dropping His UFC Debut, Jamey Simmons Enters His UFC 265 Bout With Johnny Muñoz Feeling Confident That He'll Put On A Show.
By THOMAS GERBASI, ON TWITTER: @TGERBASI • Aug. 5, 2021

Jamey Simmons was going to be a professional athlete. He didn’t know what sport would house his talents, but he did know he would be picking up a paycheck for doing something he loved.

“A hundred percent,” said the UFC bantamweight, who faces Johnny Munoz on Saturday in Houston. “Ever since I was a little kid, I knew I was gonna be a professional athlete at something. Growing up through middle school and high school, depending on what season it was, that was my favorite sport. (Laughs) I went to college and I'm in there, I'm getting a degree, but essentially I knew I was gonna use wrestling somehow to be a professional athlete, whether that was continuing wrestling and trying to make an Olympic team or make the transition to MMA.”

Before he narrowed his choices down, the Wisconsin native considered himself a four-sport athlete (football, wrestling, baseball and basketball) and while most of us hoped that we could someday play for our favorite team or do big things in an individual sport, reality usually hits hard early on.

“Not to sound cocky, but I moved around a lot in my life and I always separated myself in sports,” he said. “I've always been a little bit more athletic than my peers, so I always believed that I had it in me.”

Belief is one thing; having the determination and willingness to risk everything in order to reach such lofty goals is another. But Simmons wasn’t afraid to put his money where his mouth is, leaving the comforts of home in Central Wisconsin behind to chase his MMA dreams in Milwaukee. 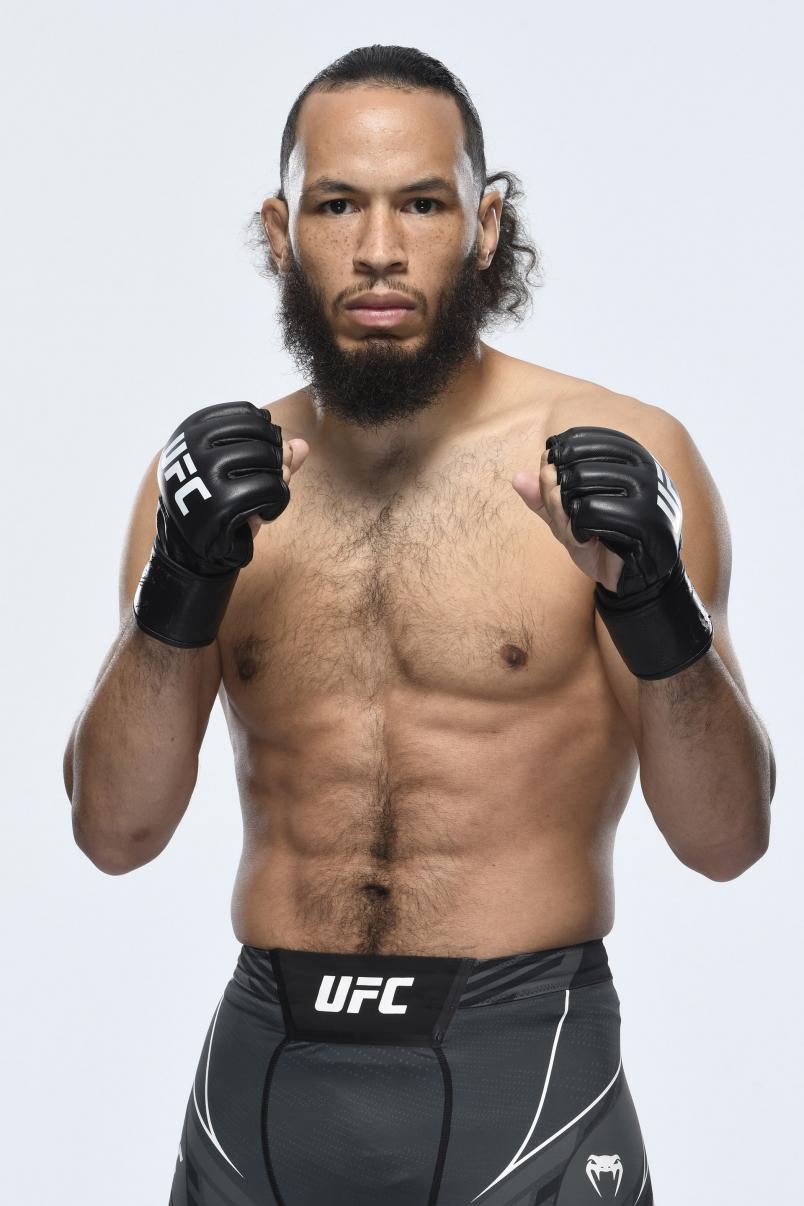 Jamey Simmons poses for a portrait during a UFC photo session on August 4, 2021 in Houston, Texas. (Photo by Mike Roach/Zuffa LLC)

“I moved here with $400 in my pocket,” he said. “I had that, I loaded up my bicycle and my clothes on a bus and I caught a bus to Milwaukee and I trained for the first two, three weeks and I was having so much success against all the fighters that had been fighting for years, a couple guys that were on the verge of getting in the UFC, so I knew then that I was definitely on the right track.”

That was a little over four years ago. Four years ago. Think of a kid picking up a basketball and playing for the Bucks in four years. Not happening. But after turning pro in 2017, Simmons compiled a 7-2 record on the regional circuit, and following that seventh win, an October 2020 submission of Shawn West, he got a late notice call less than a month later to make his Octagon debut.

“Obviously, I knew who my opponent was going in, I knew he was a stud, and I went in there expecting to win the fight like I do every fight, but it was definitely a tough first draw,” said Simmons. “I'm facing a kid who was 4-0 in the UFC and now 6-0 who's about to fight Edson Barboza to be in the Top 10. He's on a championship run right now.”

Simmons got in the way of that championship run on November 7 and was stopped in the first round. It wasn’t the way he pictured his UFC debut going, but he did get his foot in the door and he’ll have a second chance to make a first impression this weekend.

“Unfortunately, that was my ‘in’ to the UFC, but now we are getting started,” he said. “I genuinely thought I was going to win that fight, but if I'd have won that fight, I'd be in his position right now where I'm fighting a Cub Swanson or an Edson Barboza to get into the Top 10. I am just learning on the job. I picked this up four years ago. I wanted to get into the UFC and face kids that are just getting into the UFC or guys that are maybe on their way out and be able to work my way up that ladder. So it all worked out perfectly.”

Munoz is in the same boat as Simmons, having taken a short notice UFC debut that turned into a loss. Now they both have a clean slate and get to fight in front of a packed house in Houston’s Toyota Center after debuting at the APEX on Las Vegas.

Four years ago was when he took his dream and did something about it. That’s the difference between “The Afro Samurai” and a lot of other dreamers.

“You definitely have to have that sort of mentality in order to make it,” he said. “Maybe not the exact same approach that I took, but you do have to have that 'risk it all' kind of mentality, for sure. The more distractions and safety nets you have, you fall back on those when things start to get tough, so you either gotta train yourself not to do that or you're most likely gonna fall short.

“I've always flirted with this fine line of cocky and confident,” Simmons continues. “To me, it's always been confidence because I believed it, but to people around me, like my friends, or opponents in all sports, I came off as cocky. But this is a testament to visualizing it and seeing it as a kid. I stayed true to myself, I saw it, I knew it and I made it happen.”