James Vick: The World is Not Enough 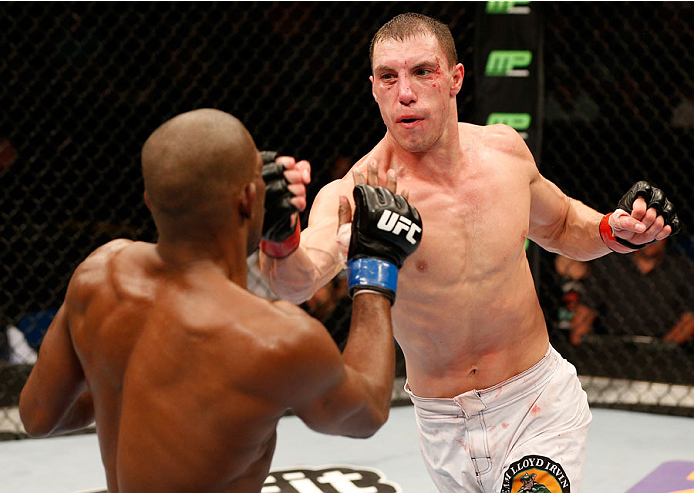 It doesn’t take much to get James Vick excited to fight, but when you throw in world travel and guaranteed adventure, he gets flat out fired up. And while that description may sound like the calling card for a British superspy also named James, “The Texecutioner” prefers to keep things on simpler methods than Mr. Bond would implore.

So while there may be no flashy gadgets or high stakes espionage when he steps into the Octagon on fight night, the rangy lightweight does possess a versatile skill set that has proven to be a difficult puzzle to solve when the action goes live. Those talents have allowed him to garner attention during his time under the UFC banner, and his growing profile in the sport has allowed him to trek across the globe plying his trade. In his mind, that’s what it’s all about, and he’s just getting started.

“That great part about being in the UFC and one of the biggest benefits is being able to travel the world,” Vick said. “I have always wanted to see the Great Barrier Reef since I was a kid and I get to do that now. It’s also one of my dreams to see the Seven Wonders of the World and that’s something I’m hoping fighting for the UFC will allow me to do. After this fight I’m going to get to work and see if I can fight in China next.”

Vick has found success in all three of his showings under the UFC banner, which has run his professional record to a flawless 7-0. When Vick’s undefeated record is matched with his relentless style, it is easy to see why the Lloyd Irvin-trained fighter has become a talent to keep an eye on in the competitive ranks of the 155-pound division.

Nevertheless, the prospect tag isn’t one he’s interested in wearing for long, and the Maryland transplant has been taking solid strides to earn passage to the next level of competition in the lightweight fold. Impressive wins over tough opposition the likes of Ramsey Nijem and German striker Nick Hein have him on the brink of bigger things, and in a position where another notable victory could certainly elevate his status.

That’s the number one goal on his mind, and progress of that nature is something he believes has been a long time coming.

“I really feel like all the hard work I’ve put in is starting to pay off and things are starting to come together for me. I’ve had a lot of injuries and that has slowed me down. I have only fought three times in the past two and a half years, but I wasn’t inactive during all that time, and I was able to develop my skill set a lot. I have really been looking forward to the time when it all starts to come together and that’s what you are seeing now. You are seeing the fruits of my labor.

“I’m really looking forward to climbing up the lightweight ladder. I had a little injury to my hand at the beginning of the year so I had to delay this fight, but I’m ready to go now. I want to make a lot of progress this year and hopefully stay undefeated.”

The Ultimate Fighter alum’s spotless record will be on the line when faces a fellow undefeated upstart in Jake Matthews at UFC Fight Night: Miocic vs. Hunt on Saturday in “The Celtic Kid’s” native country of Australia. The 20-year-old Victoria-based fighter has been lights out in his first two showings at the highest level of the sport, and Vick sees a prime opportunity to bolster his personal momentum by derailing the surging prospect.

Furthermore, with both fighters possessing aggressive styles and killer instinct, Vick couldn’t be more excited to throw down with Mathews. He traveled to the opposite side of the world to get the job done and he’s not showing up to exchange pleasantries on Saturday. He’s coming to fight and hand Matthews the first loss of his professional career.

The bout will take place in hostile territory, but that scenario only serves to further stoke Vick’s excitement to fight. Facing an opponent on their native soil sometimes evokes talk of “home cooking” or biased decisions, but Vick is adamant those elements won’t play a factor against Matthews. He knows this because he has every intention of keeping the fight out of the judges’ hands and finishing the highly touted prospect in impressive fashion.

“I think [Matthews] is going to be a very good opponent because he’s really well-rounded. He’s good at everything, but everyone who fights in the UFC competes at a high level. They wouldn’t be here if they weren’t. There are only something like 500 UFC fighters in the world so I wouldn’t expect him to be anything but good. I believe I match up well with him and I don’t think he’s ready for my skill set. I’m ahead of him in all aspects. I’ve fought better competition and I train with better training partners year round. I think those things are going to make a big difference in this fight.”