James Krause is no stranger to throwing his name in the mix for short-notice fights.
By Thomas Gerbasi, on Twitter: @TGerbasi • Apr. 1, 2020

When word circulated a couple weeks back that the UFC London event on March 21 had the possibility of being moved to the United States and that fighters were needed to fill up the empty slots on the card, it was no surprise that James Krause tweeted, “Ready when you need me @UFC.”

“Yeah, I threw my name in the hat,” said Krause matter-of-factly, eager to strap on the gloves on short notice to compete in his 37th professional prizefight. That didn’t happen, but he took to social media again a couple days ago to offer his services for the UFC 249 card on April 18.

“I am a person of opportunity,” he said. “If the lack of fighters leads to more opportunities for me, you better believe that I'm gonna throw my name in the hat and I'll be the first one to step up and say, 'Look, what do we gotta do to make this happen?' I'm all about opportunity. The guys that aren't seizing these moments, these are the times right now where you really advance yourself in whatever it is you're doing. These are the times. So if anybody isn't taking advantage of these opportunities, they're kidding themselves and missing out on a huge part of this whole deal.”

That doesn’t just apply to fighting, as Krause points out, and he knows better than most that with the COVD-19 situation changing “normal” life around the world, it’s not a time to simply catch up on movies or books, but to advance yourself in whatever way you can if there’s down time to be had.

“The stuff I'm dealing with is the same stuff everybody else is dealing with,” said Krause, who has seen his outside business interests take a hit in recent days. “It slows everything down and it's not a good time for people. But I will say this - there's always something to do, always something to be working on and something to be improving and this is a great time to pull ahead of the people that just aren't about it. So that's what I'm doing right now.”

It’s a positive outlook, for sure, but also one others can adopt if they so choose. And Krause hopes the students from his gym in Missouri are among those opting to make the best out of a bad situation in whatever way they can.

“It's a massive thing to stay positive about any situation, let alone the crazy times that we're going through right now,” Krause said. “But I think just keeping your mind sharp is important. I told my guys this the other day: imagine a scenario where everybody, for the next 24 days, takes off and they don't do anything. And then you throw together something for an hour a day for the next 24 days. You've compiled 24 hours of real-time mastery of that craft. Those are real numbers. It's 24 hours of actual improvement time, and that's hard to catch up to. That can go both ways, too. If you're messing around and doing dumb s**t for 24 hours, that can take you backwards.”

The 33-year-old from Lee’s Summit is far past that stage. He’s a family man, a successful businessman and coach, and this fighting stuff ain’t going too bad for him, either. In fact, after winning six straight UFC fights, his profile rose even higher in February when he took on Trevin Giles at UFC 247 on less than 24 hours’ notice.

Yeah, that will get you some positive attention.

“I don't know what you could say negative about it,” he said. “It was win-win for me and I knew that going into it. There really wasn't a wrong answer for me.” 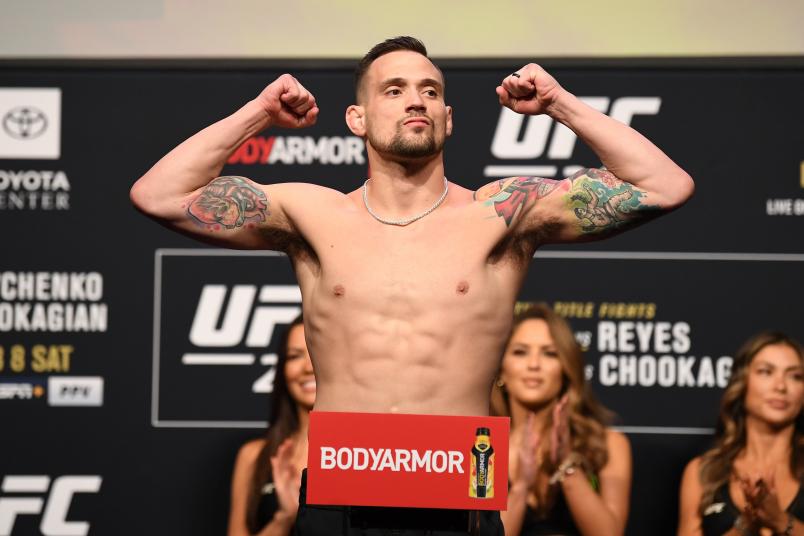 HOUSTON, TX - FEBRUARY 07: James Krause poses on the scale during the UFC 247 ceremonial weigh-in at the Toyota Center on February 7, 2020 in Houston, Texas. (Photo by Josh Hedges/Zuffa LLC via Getty Images)

HOUSTON, TX - FEBRUARY 07: James Krause poses on the scale during the UFC 247 ceremonial weigh-in at the Toyota Center on February 7, 2020 in Houston, Texas. (Photo by Josh Hedges/Zuffa LLC via Getty Images)

And despite jumping up from welterweight to middleweight without any semblance of a training camp, Krause nearly pulled off the victory, ultimately losing a close split decision to Giles that earned the pair Fight of the Night honors.

“I don't feel like I lost, but even though I did lose, I don't feel like I lost anything or took a step backwards,” said Krause, who is a hundred percent correct. In even agreeing to the fight, he became the frontrunner for 2020 Badass of the Year, an unofficial title that is nonetheless one that all fight fans can appreciate. And for the 13-year pro, it’s recognition long overdue.

“I definitely feel like I reached a new audience, for sure,” he said. “Unfortunately, I didn't get to show my full potential in that fight, taking it off the couch, quite literally. But I feel like there were more eyes on me, and next time it's on me to show what I'm about.”

Will that next time be in a few weeks or a few months? Krause is ready for any scenario, but if he was mapping out his year, he would be content with making the walk to the Octagon a couple times every 12 months.

“I've chosen a slightly different path where I'm not fighting three, four times a year, and this is gonna sound crazy, but I think I got good a lot later,” he said. “I advanced in the game a lot later than most people, and by that time I already built something outside of this where I don't want to pull back from everything outside to advance. So I'll fight twice a year and that's how I like to keep it. Anything outside of that, I'm really putting a stop to everything else I do outside and it's really tough to do that, especially with a family and kids and multiple businesses.”

But James, you already put in one fight in 2020 and you’re offering to fight again on April 18. If that happens, does that mean you’re done until 2021?

“Hell, I might even get three in this year.”