"I feel like it’s going to be a war. I’m
planning on it being 15 minutes if it needs to be – I’m in great shape,
I’m injury-free, and I hope the same for him." - James Krause 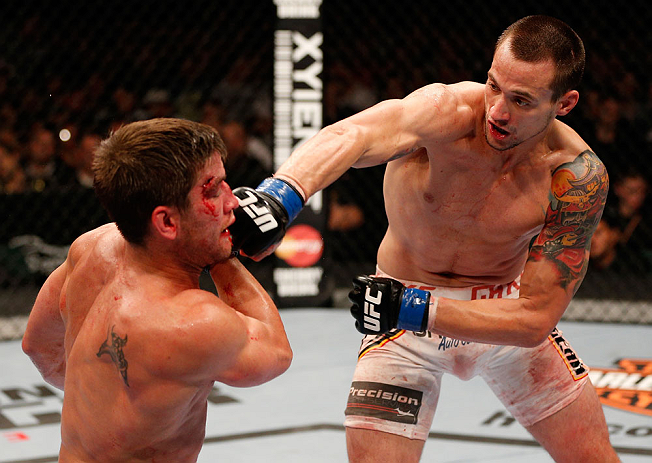 James Krause was determined to make the most of his second chance to crack the UFC roster.

A veteran of the WEC and several of the top regional promotions in the country, Krause’s name jumped off the list of fighters that would be competing for a place on Season 15 of The Ultimate Fighter. He held a win over former TUF finalist Michael Johnson from back in their formative fighting days, had shared the cage with Donald Cerrone, and went the distance with surging featherweight contender Ricardo Lamas – surely he’d be one of the 16 to make it onto the first (and only) live season of the long-running reality TV competition.

It wasn’t meant to be.

Krause was paired off with unheralded youngster Justin Lawrence, and lost just 1:25 into their elimination bout. His hopes were dashed, and the usually upbeat fighter from Blue Springs, Missouri returned home in a funk.

“That sucked, man,” admits Krause with a laugh, nearly two years removed from the contest and preparing to make his second trip into the Octagon. “That was one of the worst moments of my life. I got depressed. I’m never depressed. I’m always in a good mood, and if I am in a bad mood, it’s never more than a day.

“I went to a pretty crappy point for about two weeks – things were terrible. I hated life, but when stuff like that happens, you have to make a decision – you can either feel sorry for yourself or you can get up and do something about it. We went back to the drawing board and thought we could make some stuff happen, and I knew I was that caliber – I knew I could fight at that level – I just needed a chance to show my skills.

“The deal with TUF happened, and I thought it was the end of the world, but you’ve just got to pick yourself up, brush yourself off, and get back at it.”

Krause got back at it under the Resurrection Fighting Alliance banner, defeating former TUF hopeful Amir Khillah before knocking out Guilherme Trindade in 31 seconds to push his winning streak to five. Following a submission win over Joe Jordan 28 days later, Krause used his post-fight interview to ask UFC matchmaker Joe Silva to give him a call.

Isaac Vallie-Flagg was forced from his bout with veteran Sam Stout, and Krause’s phone rang. 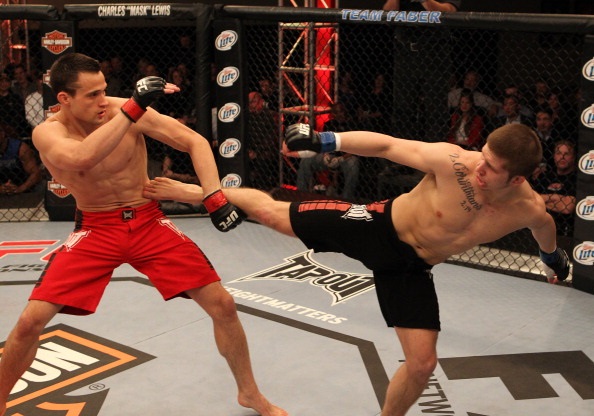 “I was so ready – mentally and physically – I just needed time to cut the weight,” says the lightweight of the opportunity to step up at UFC 161 this past summer. “I’m always ready to fight; I’m always in shape. I don’t get out of shape or anything like that, but if you give me enough time to cut the weight, chances are I’m going to be ready to fight.

“I just needed the chance – they offered me a couple fights before that on really short notice, and I know I wouldn’t have looked good due to a crappy weight cut – but I knew given the right chance to cut the weight properly, I’d do fine.”

He did more than fine.

Stepping in on a little more than two weeks notice, Krause looked right at home inside the UFC cage, taking the fight to Stout early. While the Canadian battled back in the second, the third and final frame belonged to the newcomer, as a quick, long jab mixed with impactful strikes to have Krause on his way to a decision win before Stout opted to shoot for a takedown late in the frame.

Rather than simply ride out the final 30 seconds on bottom, Krause grabbed a guillotine choke, sinking it in deep, forcing Stout to tap with just 13 seconds remaining in the contest – the first time he’d been finished in nearly seven years.

Krause earned $100,000 in bonuses for his efforts, collecting half of that sum for Submission of the Night, with the second half coming for Fight of the Night, and he is now ready to get back in the cage and try to do it all again.

The entertaining and charismatic fighter returns to the cage next week as part of the UFC’s third Fight for the Troops event, taking on another exciting newcomer to the lightweight ranks, Bobby Green, when the Octagon touches down at Fort Campbell next Wednesday.

“I think they put this fight together – similar to the Stout fight, I just can’t imagine this fight being boring,” Krause says of the pairing with Green, who similarly earned a third-round submission win in his UFC debut back in February. “I don’t see any scenario where this is a boring fight. We’re rarely in boring fights, rarely go to decisions – we both bring it. 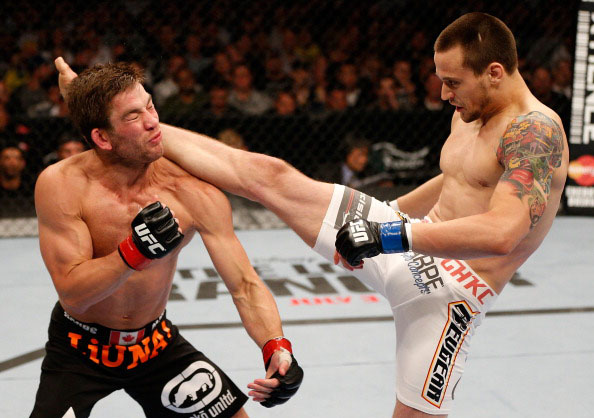 “Bobby’s a tough guy. When you watch video on him, he’s not crazy technical, but the dude finds ways to win – he always does. He finds a way, and I’ve got to watch out for that. I feel like (Jacob Volkmann, Green’s last opponent) came in way out of shape for that fight, and I can’t let that happen – I won’t let that happen, I can assure you.”

Green earned a ton of praise from UFC President Dana White following his win over Volkmann at UFC 156, overcoming some questionable officiating to finish the bout in the third and take home Submission of the Night honors. Like Krause, the 27-year-old Californian has been around the periphery for some time before making the most of his UFC debut.

Now the two lightweights with near identical records (Green is 20-5, Krause 20-4) and similar skill sets will share the cage, looking to once again make an impression and set the tone heading into the main card contests.

“The UFC put us as the last fight before the main card, and I think they did that for a reason – they know that me and Bobby are going to come out, and I think it’s going to be fireworks. Neither of us is afraid to try anything. We’re both solid everywhere. I don’t have fear of throwing any technique, and I feel like he’s the same way.

“I’m excited to figure out the Bobby Green puzzle. I’m all about those matchups with guys that are hard to figure out. Same thing with Stout – how do you finish a guy that doesn’t get finished? How do you figure that out? I tried so hard to finish that dude – I wanted it so bad, and I didn’t think I was going to get it, but I went to the guillotine, and got it.

“The question in my head and in my camp’s head is what is that missing link he’s doing that nobody sees? How is he finding ways to win this fight? If we can find that out during the fight, I think I’m going to come out victorious.

“But I feel like it’s going to be a war,” Krause adds with a laugh. “I’m planning on it being 15 minutes if it needs to be – I’m in great shape, I’m injury-free, and I hope the same for him. I want to fight the best Bobby Green there is, so really, I think the fans win this fight, but we’ll find out on November 6.”