Jamall Emmers Is Ready To Find His Groove

Jamall Emmers Is Excited For The Opportunity To Start 2021 Off Against A Veteran Like Chas Skelly At UFC Fight Night: Blaydes Vs Lewis
By BY E. SPENCER KYTE, ON TWITTER @SPENCERKYTE • Feb. 16, 2021

That’s the disclaimer at the bottom of every fight card and printed on event tickets in order to let everyone know that the slate of bouts initially announced are written in pencil and between the date of purchase and the date of the event, things could change.

Through the first two fights of his UFC career, it’s been a caveat that Jamall Emmers has become intimately familiar with as well.

The 31-year-old featherweight, who takes on Chas Skelly on Saturday night in Las Vegas, made his promotional debut on short notice last March at UFC 248, stepping in for Douglas Silva de Andrade against emerging star Movsar Evloev. Two weeks later and just eight days before the event, Evloev was forced to withdraw and was replaced by Giga Chikadze, who came away on the happy side of a split decision verdict.

Just under five months later, Emmers was paired off with Timur Valiev for his sophomore appearance inside the Octagon, but two days before the contest, Valiev was scratched and replaced by Vince Cachero. Unfazed, Emmers earned a clean sweep of the scorecards to collect his first UFC victory, and on the eve of his fight with Skelly on Saturday, he’s hopefully that he doesn’t run into another last-minute opponent switch. 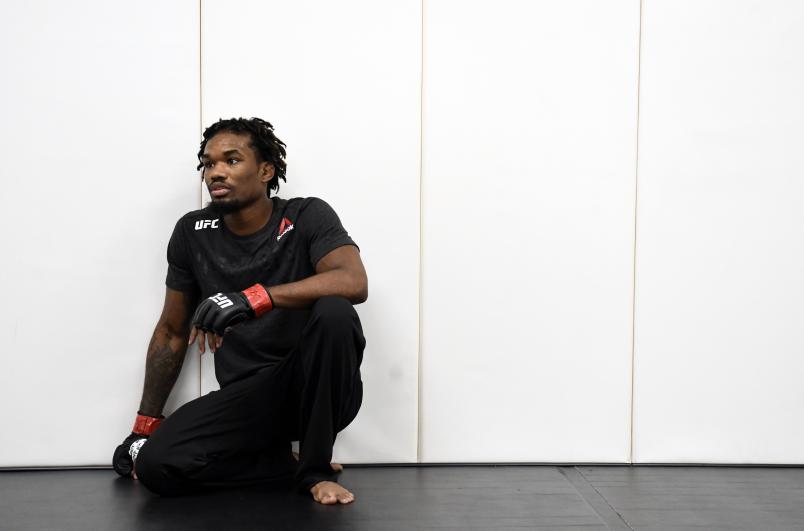 Jamall Emmers warms up prior to his fight during the UFC Fight Night event at UFC APEX on August 01, 2020 in Las Vegas, Nevada. (Photo by Mike Roach/Zuffa LLC)

“Hopefully they don’t switch up my opponent,” he said with a laugh. “The more I study this guy, the more familiar I’m getting with him, right down to how he walks and how he talks.

“I can track his whole career. He’s got fights on YouTube from before he made it to the UFC, so I can track certain tendencies and that makes the fight a little easier knowing I can track this guy like that.”

In addition to having access to a wealth of footage from Skelly’s 22-fight career to study, Emmers also has some hands-on experience with “The Scrapper” from back in their days on the regional circuit that he can tap into as well.

“Me and Chas are familiar with each other,” he began, explaining how he crossed paths with his current opponent back in the day. “I started my fight career in Texas, and he was one of the bigger names at the time.

“I fought for Legacy and he was there, and he invited me up to help him with some of his camps, so we’re familiar with each other. This was years ago, and I know a lot of things have changed since then, but I’ve sparred with him, I’ve grappled with him, I’ve drilled with him.” 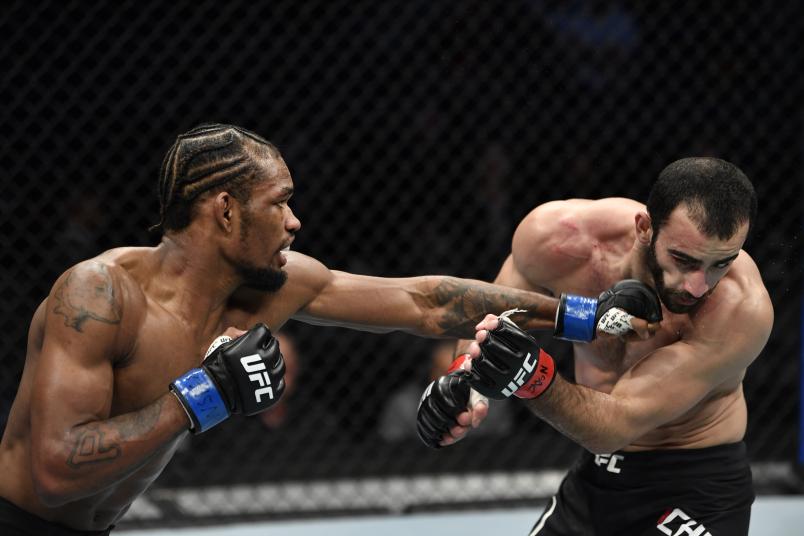 Jamall Emmers punches Guido Cannetti of Argentina in their featherweight fight during the UFC 248 event at T-Mobile Arena on March 07, 2020 in Las Vegas, Nevada. (Photo by Jeff Bottari/Zuffa LLC)

When the matchup was presented to each man, Skelly reached out and the two simply wished each other all the best.

“He hit me up and we talked a little bit, wished each other the best camps, and that’s it,” explained Emmers, noting there wasn’t even any friendly trash talk or boasts between the two. “I’m fighting an acquaintance, a guy I know, and in this sport, it’s bound to happen because I’ve been around for a while.

“It’s just another fight to me.”

Not only is that Emmers’ mindset heading into this weekend’s showdown with Skelly, but it’s also how the 23-fight veteran has managed to quickly assimilate to his surroundings and establish himself as someone to watch in the talent-rich featherweight division after just a couple of appearances inside the Octagon.

Despite only reaching the UFC last year, Emmers has been fighting professionally since the tail end of 2012 and was a rising star on the regional circuit long before finally getting the chance to compete on the biggest stage in the sport.

Combing through his resume reveals an early victory over Alexander Hernandez, a championship loss to Thiago Moises under the Resurrection Fighting Alliance banner before the company merged with Legacy Fighting Championship to become Legacy Fighting Alliance (LFA), and a unanimous decision win over Cory Sandhagen under that new powerhouse regional banner that stood the bantamweight standout’s lone setback until his loss to Aljamain Sterling last summer. 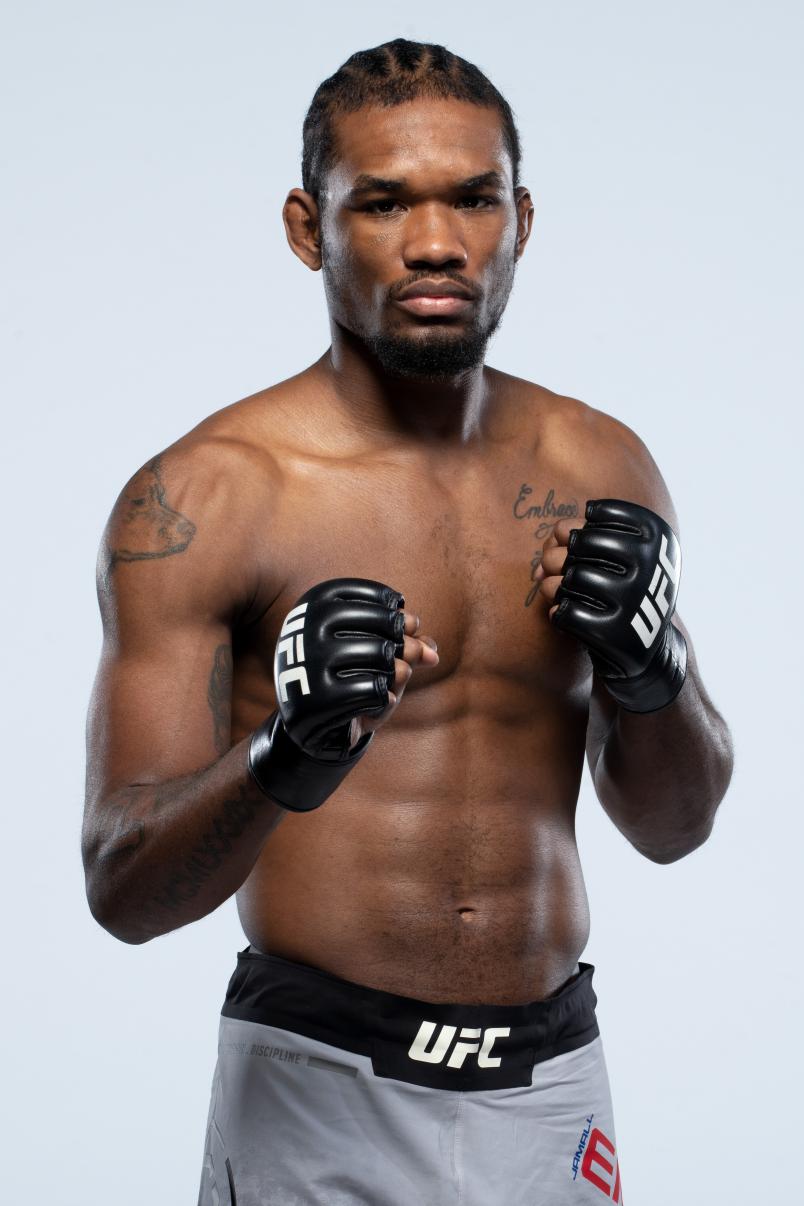 Jamall Emmers poses for a portrait during a UFC photo session on March 3, 2020 in Las Vegas, Nevada. (Photo by Mike Roach/Zuffa LLC)

That “just another fight” approach helped him bounce back from a second-round stoppage loss to Julian Erosa on Season 2 of the Contender Series and rattle off the four straight victories that helped earn him last year’s call to the UFC roster and turn his second appearance in the Octagon into his first win in the promotion.

“My last fight, it felt like it was just another fight,” said Emmers, who also counts wins over TUF finalist Jay Cucciniello and Diaz Brother acolyte Chris Avila amongst his 18 career victories. “I only need to experience something once and then I’ve got a feel for it, so I can adjust to how I need to operate; I’m pretty adaptable that way.

“Getting that first victory took a little pressure off me, but I’m the kind of fighter that I love pressure,” he added. “The more pressure, the better I am.

“Knowing Chas, I know he will want to grapple heavy, and me, I might want to strike more with him, and the added pressure of me maybe getting taken down, I love how that feels. It’s like, ‘He might be able to take me down and hold me.’”

Comfortable competing on the big stage and a couple days away from facing the opponent he’s prepared for throughout training camp, the Miami-born, Inland Empire-based Emmers sees this weekend as a chance to register a second straight victory and map out what will hopefully be an active year inside the Octagon.

“I like that I get to see my schedule a little earlier instead of waiting until the middle of the year or later in the year,” Emmers said of once again getting a relatively early start to this year’s campaign in the cage. “That way I can gauge how many fights I’ll be able to get this year.

“If I come out of this fight healthy enough, I’ll turn right back around and get another fight as soon as possible.

“I see me winning, of course — dictating the pace of the fight, doing whatever I want,” he added when asked how he sees things playing out on Saturday night inside the APEX. “I feel like overall, I’m the superior fighter.”

After a pair of late changes last year, Emmers might actually get the chance to prove that against the opponent he’s been preparing for, provided those familiar four words don’t rear their head once more: card subject to change.