Whatever Jamahal Hill chose to do, he was confident that he could find success in it. That might come off as arrogant, but it’s less that and more a supreme level of self-belief that, at the end of the day, Hill was going to figure out how to excel.

Whether it was basketball, football, chess (Hill was in the chess club in high school) or eventually, mixed martial arts, Hill had a knack at becoming good at things.

“Ever since I was young, when I was a kid, I always knew whatever I decided that I was going to do, I was going to be great at it,” Hill said. “I could be good or just as good as anybody. That’s just the confidence and belief I have in myself, so once mixed martial arts came along and I started working on it, started tweaking things like that, it’s like, all right, this is what I was going to do.”

Anderson Silva first caught Hill’s eye, and he then found a gym for himself. Soon enough, he was hooked and running five miles to and from the gym every day to train.

Six fights into his professional career, Hill is set to make his UFC debut in Raleigh against Darko Stosic. After winning a contract on the Contender Series, Hill has been forced to wait for his first foray into the Octagon after his bout in Shenzhen fell through. Although he semi-joked that he “would’ve liked to be making money” sooner, he has put that time to good use.

“I’m a lot better than I was on the Contender Series,” Hill said. “One good thing about me is I’m good at critiquing myself, picking out my weaknesses or things that are openings or whatever you want to call them and addressing them.”

At 6-foot-4 with a 79-inch reach, Hill is an enticing physical presence in the light heavyweight division that is always in need of new blood. For someone who always assumed he’d find greatness, Hill does still find satisfaction beyond the affirmation of his self-confidence. 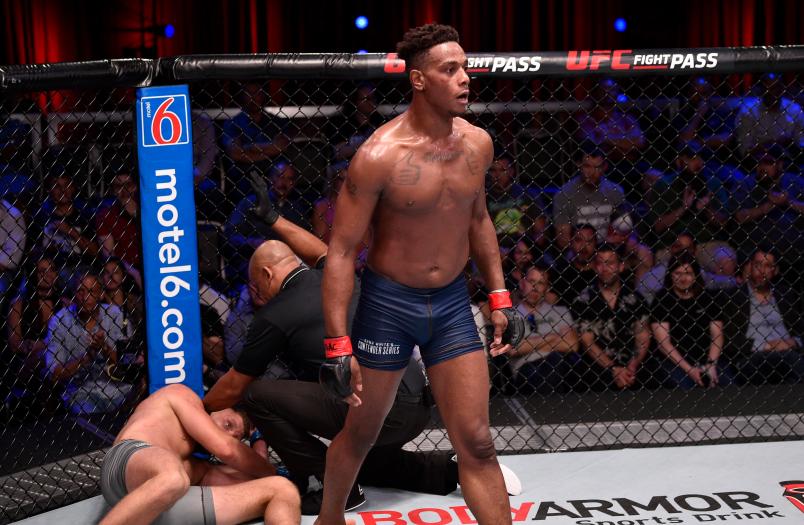 LAS VEGAS, NV - JULY 23: Jamahal Hill celebrates after his TKO victory over Alexander Poppeck of Germany in their light heavyweight bout during Dana White's Contender Series at the UFC Apex on July 23, 2019 in Las Vegas, Nevada. (Photo by Chris Unger/DWCS

Ideally, he’ll have one of those realizations on fight night. He admitted he hasn’t fought in front of as many people as there will be in PNC Arena, but he’s one to feed off the crowd and calls his walkout a “party.”

“It’s just having fun, excited to be there, giving the crowd a show and making sure they’re having fun,” he said. “Then, I go in there and I handle my business.”

The fight week business clearly isn’t getting to Hill at all. With finishes in half of his fights, an entertaining bout is a fair expectation, and if there’s been anything gathered from Hill thus far is that he likely expects just as much. Don’t expect him to get caught up in the moment, though. He’s been ready for a while.