Motivation comes in various forms. In the case of Jalin Turner’s September bout with Uros Medic, he was so motivated that the highly touted Medic didn’t have a chance.

“My buddy Herve told me if I won my last fight, he'll send me a suit,” said Turner. “I ended up getting the win and he sent me one.”

Demanet? Yes, Turner received a bite suit, designed to protect the one wearing it from bites while training a dog.

Did you expect anything less from a man who collects tarantulas?

“I got the weirdest of hobbies, I'd say,” Turner laughs, and he’s right. Most people play video games, read books or collect baseball cards for a hobby; Turner is letting dogs attack him.

“I've been doing this for a few years now,” he said. “It's fun and I like learning new things. If it interests me, I want to get all in and learn as much as I can about it and make it a skill at some point. That's what that became. I always loved dogs and my friend is a professional dog trainer so I was bugging him to teach me and he started teaching me his ways and I got really into it and really loved the bite work stuff.”

A look at Turner’s Instagram page will show him in action with a dog trying to use his arm as a bone, and yeah, it isn’t something most of us would volunteer for.

“If the dog bite's hard enough you can feel it,” said Turner. “But I didn't get a super thick suit. It's a semi-training suit so it's thick enough, but you can still feel a little bit of the love that they give you.”

Turner laughs, prompting me to ask if the professional prizefighter is worried about the dog’s teeth straying beyond the suit’s parameters.

“You train them not to go for areas like that,” he said. “It's usually pretty safe and as long as the handler's holding the leash, you're good. You gotta be able to read the dog, too. You'll be able to tell if a dog's gonna get off the bite most of the time.”

All of this for me to make my point that someone like Jalin Turner would never be satisfied in a 9 to 5 job, that fighting was an inevitable path for this adrenaline junkie.

Needless to say, with four UFC victories and a three-fight win streak heading into his Saturday bout against Jamie Mullarkey, Turner won’t be going near Marshall’s for anything but shopping now or in the future. And about the only negative about the Californian’s run in the Octagon is that his last two appearances have been in September of 2020 and 2021. So, in addition to getting the win this weekend, Turner wants to fight more in 2022. A lot more. 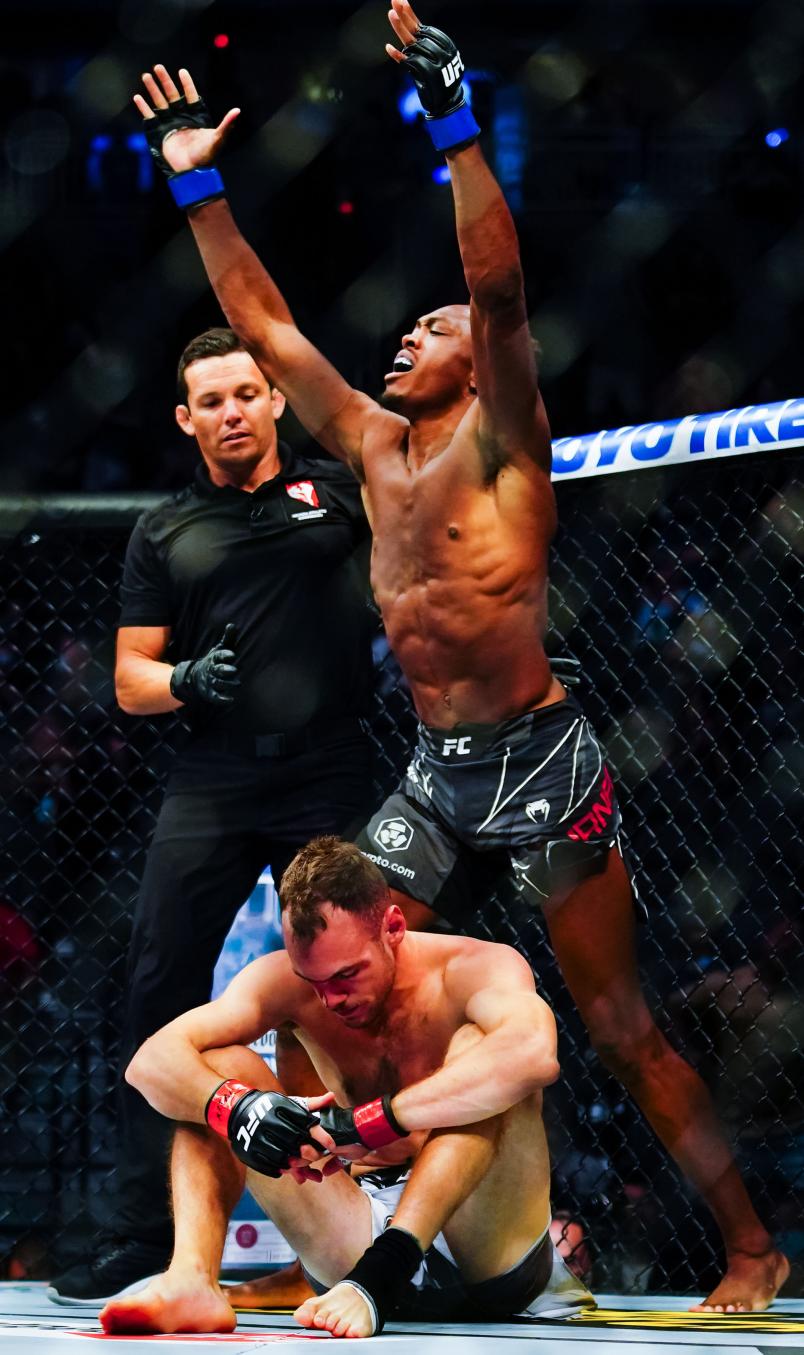 Jalin Turner celebrates defeating Uros Medic by rear naked choke in the first round of their Lightweight fight during UFC 266 at T-Mobile Arena on September 25, 2021 in Las Vegas, Nevada. (Photo by Alex Bierens de Haan/Getty Images)

“I want to get this big win, start it off right, renew my contract and go from there and see where the wind takes me,” he said. “But yeah, I want to get at least three in this year. As long as I'm happy, healthy and able, I want to stay active.”

He’s got a tough test in front of him in Australia’s Mullarkey, who is coming off back-to-back knockouts of Khama Worthy and Devonte Smith. The same thing was said about Turner’s bout with Medic, a highly touted prospect who was unbeaten and coming off a first-round knockout in his UFC debut. “The Tarantula” heard the noise before the fight.

“Yeah, I stumbled across a few tweets and messages that I had to revisit to let them know, 'Hey, what happened to your boy?'” Turner laughs. “A lot of people were riding the Medic train pretty tough and giving me stick about it. But I've dealt with it before, I've dealt with it my whole career. I'm gonna just save these messages, get my screenshots, then go back to them after the fight and let them know. They didn't even have to be disrespectful, but just let 'em know, I see what you said.”

MORE UFC 272 : Masvidal Is Determined To Wreck Covington | Fight By Fight Preview | Fighters On The Rise

It took slightly over four minutes for Turner to end Medic’s unbeaten run, and while it was a big win for the 26-year-old, it felt just as good as the rest of his victories.

“They all feel good equally,” he said. “At this point, it's about collecting both those checks and being healthy at the end of the night. That's what it's really about. All fights are pretty much the same until I get to that title shot. That's when I'll be like, 'Okay, this is the fight.'”

As calm as ever, that Mr. Turner. Not surprising from a man who will battle attack dogs in his leisure time.

“I went through a lot these last couple years, so mentally, I'm just on a different level,” he said. “I take everything as it comes and I try not to stress out about anything and stay as unfazed as possible. It's helped me acquire this win streak, too. Life's gonna happen how it happens and you've gotta roll with the punches and keep it flowing.