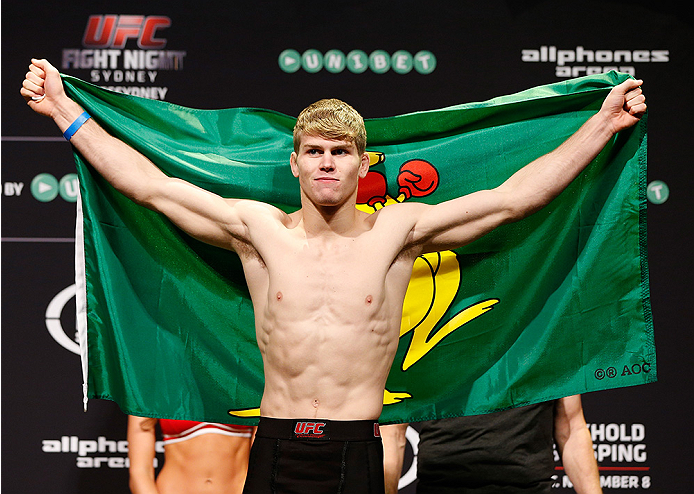 It’s very easy to forget that Jake Matthews is not yet 21 years old. Despite being just two fights into his UFC career – and only nine bouts deep as a pro – the lightweight prospect approaches the sport with a veteran’s mindset and understanding, a outlook he attributes to his father and coach, Mick.

After consecutive submission finishes in his first two Octagon appearances, the former TUF Nations contestant has quickly established himself as one of the best young talents in the UFC, boasting an outstanding ground game, developing striking and plus athleticism, to borrow some terminology from the talent evaluators at the recently completed NFL Draft.

“It’s a great privilege and a pleasure to hear people talk about me like that,” Matthews says of the critical acclaim he’s received through his first two UFC fights. “It kind of reinforces that this is what I’m supposed to be doing, this is where I’m meant to be. Not that I need the motivation, but it does provide motivation when you hear those things or even when (UFC President) Dana White says stuff about me. It makes me want to prove those people right.”

Whether it’s good fortune or expert planning, it seems that whenever the UFC starts to make a serious push into a new territory, there is at least one fighter from that region that stands out above the pack as either a current contender or a champion-in-the-making.

Canada had Georges St-Pierre at the vanguard as the UFC moved north of the border and Michael Bisping led the charge during the promotion’s first push into the United Kingdom. Legends like Anderson Silva and Antonio Rodrigo Nogueira were joined by younger standouts Jose Aldo and Renan Barao as the organization began making frequent trips back to Brazil, and now that the UFC is expanding its presence in Australia, Matthews is front-and-center as a fighter the nation can watch climb the ranks and potentially emerge as the country’s first UFC champion.

Being thrust into such a position could be suffocating for some fighters, regardless of their age and level of experience, but it’s a role the 20-year-old welcomes with open arms.

“I don’t feel like I’m pressured because that’s my dream anyway (to be UFC champion),” Matthews, who has picked up eight finishes in his first nine professional outings, admits. “If people expect me to win, that’s what I expect of myself, so it’s no added pressure. To be that guy in Australia – when people hear UFC in Australia, they think Jake Matthews – that’s the goal I’m aiming for and we’re getting there. To be the first Australian UFC champion, that’d be a dream come true.”

Though he admits he’s a long way from accomplishing his UFC dreams, Matthews’ confidence is growing with each successful appearance and with good reason.

After training for his UFC debut in a 20 x 13 shed in his backyard with only his younger brother as a sparring partner, Matthews and his father opened the XLR8 Training Center in his hometown of Epping, consolidating all his preparation under one roof and creating a facility where several of the members of Team Australia can train together.

“My little brother, Alex, he’s been training as long as I have, so when he gets to my age he’s probably going to be a lot better than I am at this point,” he offers in the “I hate to admit this” tone all older siblings are familiar with. “He helped me a lot for my Auckland fight – I didn’t have any sparring partners, so he was my sparring partner. He’s three years younger and he’s bigger than me, so I’ve got it in my head that I have to get him while I can before he gets too big and too experienced.”

“It’s taken training to a whole other level,” Matthews says of opening his gym. “Instead of me having to drive hours to train every day, we’ve got most of our training under one roof. We’ve got sparring partners coming to us.”

Not yet 21, just now starting to train in a proper facility surrounded by reliable, experienced teammates and already sporting two stoppage wins in the UFC, it’s clear that Matthews has the potential to develop into something special.

This weekend, he will take the next step down the road he hopes leads to championship gold on Saturday, kicking off the main card of the UFC’s inaugural event in Adelaide against fellow unbeaten lightweight James Vick.

Like Matthews, Vick is a product of The Ultimate Fighter system, having lost to eventual winner Michael Chiesa in the semifinal round on Season 15 of the long-running reality TV competition. The 26-year-old Texan, who fights out of Temple Hills, Maryland as part of Team Lloyd Irvin, has collected three straight wins since coming off the show, most recently picking up a unanimous decision win over Nick Hein back in November.

“His last two fights have gone the distance and there is nothing that stands out as being too dangerous,” Matthews offers in assessment of Vick. “He likes to be rangy and moves back a lot, tries to control the pace, but I’m used to sparring guys his size and two weight classes heavier, so I don’t think it’s going to be too much of a problem.

“He starts – not necessarily slow, but he does suss his opponent out a bit, so I’m going to come out and explode on him, push the pace and go for the finish in the first round and I believe I’m going to get it.

“Every fight is just as important as the last one or the next one, but this is a big fight,” Matthews adds of this weekend’s encounter with Vick. “It’s my first fight on the main card and to open up the main card, I want to make it an exciting fight. The most important thing is getting the win, but I think I can finish the fight however I want to finish it.”

From there, it’s on to the next one and continuing on toward that ultimate goal.

“At the moment, where I’m at is nowhere close to where I want to be, so for me, it’s just the beginning and this next fight is just another step towards where I want to go. Last year was a good year and my name is getting out there now, I’m getting good exposure, and I just want to keep that roll going, win this next fight and what comes after that will come after that.”