Jake Matthews: Dedicated to the Dream

"I wanted to be the first guy out of the house to get back to Australia, get another fight, get another win and I did that." - Jake Matthews 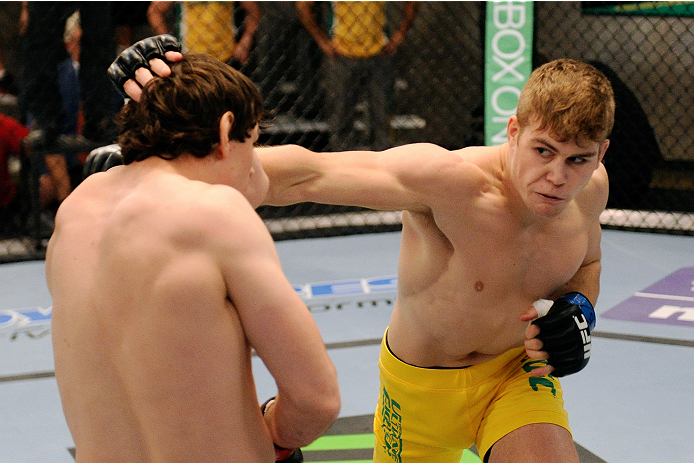 “I always say that with hard work and focus, dreams do come true. I believe that if you implement those two things, it’s inevitable that you’re going to succeed.”

While some may dismiss the above quote as run-of-the-mill motivational material, it carries a different weight when it comes from Jake Matthews because at just 19 years old, “The Celtic Kid” is a testament to the words he speaks.

A member of Team Australia on The Ultimate Fighter Nations, the unbeaten Melbourne native had a disappointing performance on the show, looking flat in a loss to eventual finalist Olivier Aubin-Mercier in the welterweight quarterfinals. Bounced from the competition and not invited back for the April finale, Matthews could have tucked his tail, returned home, and lamented his situation, but instead, he set his sights on making a quick return to the big stage.

“I knew I would have to go away and get a couple of wins,” says Matthews of his post-TUF plan of attack. “I stayed in touch with (UFC matchmaker) Joe Silva, came back to Melbourne and had a fight as soon as we could - pretty much the day after we got our releases - and I showed in that fight I could make it a hard grind fight.

Ten days after Team Canada swept Team Australia on the Ultimate Fighter Nations Finale in Quebec City, Matthews returned to the cage, picking up his fifth consecutive victory with a unanimous decision win over Stuart Dare in Melbourne. Less than a month later, his phone was ringing and it was the UFC on the other end.

“I think that’s part of the reason I got the call-up as well,” opines Matthews, who faces off with fellow newcomer Dashon Johnson on the preliminary portion of this month’s UFC debut in New Zealand. “I showed that I wanted to get back in there and showed how hungry I was for this.”

It has been a whirlwind six months for the youngest fighter on the UFC roster, beginning with a winter spent filming in Canada and culminating with a short flight to Auckland for his UFC debut, with a fight and an opportunity to train alongside his Team Australia coach sandwiched between the two endpoints.

For the talented young Australian, it has been an eye-opening course of events - one he wouldn’t change for the world, except for his performance against Aubin-Mercier.

“I absolutely loved my time in Canada - everything apart from the loss,” admits the 19 year old, who will carry a 7-0 record into the Octagon later this month. “I wouldn’t trade it for the world. The guys we met - both Australian and Canadian - I made friends for life and the training was invaluable as well.

“I was home for about three weeks and I was in talks with Kyle Noke, and he said, `If you want to come over to Albuquerque, you’re more than welcome,’ so three weeks after getting home from Canada I was over training at Greg Jackson’s gym. The camp was in full strength - Jon Jones, Travis Browne were training - so I went from one extreme to the next.

“It was pretty surreal, you know?” he offers in regards to training at the Team Jackson-Winkeljohn facility. “Only a couple weeks, couple of months before I’m watching a lot of them on TV, thinking how good it would be to train with them or be at that level and the next minute I’m in Albuquerque and they welcomed me in the door.”

The next destination on his journey is Vector Arena in Auckland as part of the inaugural 10-fight UFC event in New Zealand, where his official first appearance in the Octagon will serve as the featured preliminary card bout.

“It’s the next best thing to fighting in Australia, I guess,” Matthews says of competing in Auckland. “It’s only a four-hour flight, so I don’t have to worry about jetlag. It’s close to home, so there are only a few little things that I have to worry about for my debut fight, which is going to help.”

The one key thing he’ll need to worry about is Dashon Johnson.

Like Matthews, UFC Fight Night: Te Huna vs. Marquardt will mark the organizational debut of the 26-year-old Californian as well. Holding a perfect 9-0 mark with eight finishes, Johnson has also logged more than 30 fights as a professional boxer and enters next week’s contest off consecutive first-round submission wins, giving Matthews lots to consider as he prepares to cross the threshold into the Octagon for the first time.

“I’ve done my homework on Dashon,” he says. “I know he’s had a long boxing career, (roughly) 30 fights, he’s an all-state wrestler in California, so he’s got some credentials, but I’ve watched his MMA fights and I’m confident that I can win the fight.

“In saying that, you’ve still got to be careful - he’s got a lot of experience, but at the end of the day, we’re not having a boxing fight or a wrestling fight. I think I throw it all together better than he does in an MMA fight.

“Watching all his fights, it’s pretty much the same game plan - he throws his overhand, shoots for a double leg, so I’m going to be expecting the same. Maybe because of my experience on the ground he’s going to want to stand up a bit more, but I’m happy wherever the fight goes.”

More than anything, he’s happy to have the opportunity to get the chance to show UFC fans that his performance on TUF Nations was an anomaly and embark on what he expects to be a long and successful career under the UFC banner.

“I’m proud of being the youngest active fighter in the UFC,” says Matthews, who won’t turn 20 until the middle of August. “So there is no rush - I get to take it fight-by-fight, however the UFC wants to use me. I’m super-excited to be here.

“(As for my fight, fans) can expect a completely different animal. They should totally ignore the fight that I had on The Ultimate Fighter (Nations) because that wasn’t me. If they look at my previous fights back in Australia, they can see that I push the pace, don’t give my opponents a chance to breathe, and for whatever reason, I didn’t do that in Canada. This next fight is going to be a complete 180 from what they saw on the TV show.”