"People always use age against me – that I’m too young to be in the UFC – and that win showed that age isn’t a factor; it has nothing to do with it." - Jake Matthews 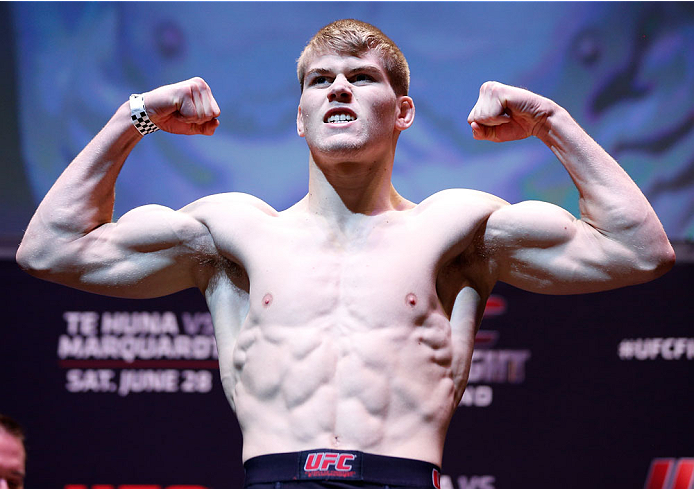 Age and experience are always going to be a topic of discussion whenever Jake Matthews prepares to set foot in the Octagon, as the 20-year-old lightweight with just eight professional fights to his credit is the second youngest fighter on the UFC roster.

It doesn’t help that the emerging Australian could easily be cast as a high school student – his baby face suggesting “Prom King,” not professional mixed martial artist. Fifteen years from now when he still looks like he’s in his mid-20s, Matthews might consider his youthful appearance a blessing, but for now, he’s tired of having people question whether someone so young can compete at this level.

After all, “The Celtic Kid” has already proven he belongs.

A contestant on TUF Nations, Matthews was bounced in the elimination round by eventual finalist Olivier Aubin-Mercier and not invited back for the finale in Quebec City. Rather than lament his situation, he returned home and picked up a victory just a few days after the cast were released. A month later, the UFC came calling, offering the unbeaten prospect a place on the June 28 fight card in Auckland, New Zealand.

After controlling the action through the first two rounds, the submission specialist locked up a triangle choke on fellow newcomer Dashon Johnson midway through the final frame, deftly setting up the finish and earning the tap. In the process, he became the youngest fighter to ever pick up a submission win inside the Octagon.

“It’s magic to me to be able to say that I’m the youngest person ever to get a submission victory,” Matthews, who pushed his record to a perfect 8-0 with his debut win, admits. “It shows that I can have a long career and that I’m not too young to be in the UFC and be competitive.

“People always use age against me – that I’m too young to be in the UFC – and that win showed that age isn’t a factor; it has nothing to do with it – it all comes down to training and hard work.”

This Friday (Saturday in Australia), Matthews returns to action, gunning for his second win as he welcomes veteran Vagner Rocha back to the UFC. The 32-year-old Brazilian went 1-2 in his first stint with the organization and has gone 4-0 with three finishes since being released following a February 2012 loss to former TUF winner Jonathan Brookins.

With twice as many fights under his belt and a couple more trips into the eight-sided UFC cage on his resume, Rocha, like just about everyone else, has an experience edge on Matthews, but the confident fighter from Epping – a suburb just north of Melbourne – wouldn’t have it any other way.

“He has three fights in the UFC in the past, so he’s got more experience than Dashon Johnson,” he offers in regards to Rocha. “It’s definitely a step up from my debut and I want a step up in every fight. That’s the reason I do this – I want to win fights and keep challenging myself, fighting the more experienced guys.”

Listening to Matthews speak, it quickly becomes apparent that he’s not your typical 20-year-old and not just because he’s a professional fighter.

He speaks with a purpose and projects a focus and determination that belies his age. While he’s preparing for the here and now, he’s also planning for the future as well, working toward what he hopes will be a 15-plus-year career fighting under the UFC banner.

He has a personal motto that keeps him motivated, which he shared prior to his debut appearance back in June.

“I always say that with hard work and focus, dreams do come true,” he said. “I believe that if you implement those two things, it’s inevitable that you’re going to succeed.”

Debuting on home soil can rattle some fighters, but Matthews took it all in stride, coasting through training camp and fight week without any issues before delivering a standout performance that put him on the radar as a fighter to watch going forward.

“When I was announced as the winner, that’s when it all started to sink in. I didn’t have a problem walking out and I didn’t really notice any of it until afterward. The atmosphere in the venue was great with the music going and the lights flashing and everyone cheering.

“It sort of got me pumped up, unlike The Ultimate Fighter, where it was really quiet,” he laughs, referencing the limited number of observers that took in the bouts between Team Canada and Team Australia. “When I got introduced, I was just focused on the fight. After I won, that’s when I started taking it in that I had just won my first UFC fight.”

With his first win out of the way, the talented, young Aussie is looking forward to stepping back into the cage with Rocha and continuing to prove that he has the talent to succeed in the big leagues

“I’m going to play to my strengths, but I always say, `Play what you see,’” he says of his sophomore appearance. “I fight off reaction and instinct. There’s no strict game plan – I’m just going to do my thing, play my game. I think when you start playing into your opponent’s game, that’s where they’re going to beat you.

“I’ve played this fight through in my head a few times, different scenarios each time, but my hand is always raised in the end.”