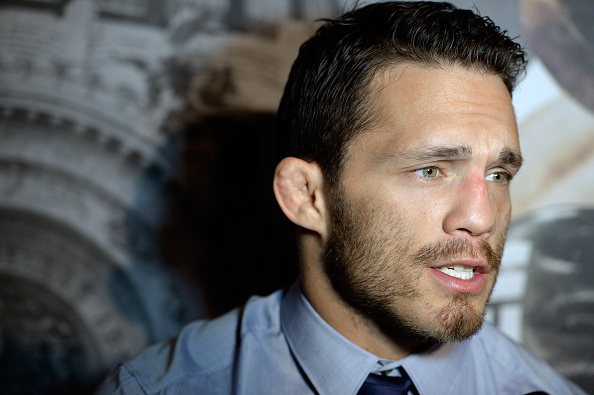 It wouldn’t be completely accurate to say veteran fighters are reluctant to change, but when you’ve been in the game for nearly ten years like Jake Ellenberger, they’re not going to reinvent the wheel either.

Following a disappointing decision loss to Rory MacDonald in July of 2013 and an injury-induced layoff, Ellenberger began supplementing his normal training regimen with some work with a good friend who had a bit of a busy schedule, but enough time to spare for a buddy.

“I had initially met Edmond years back through Ronda and Ryron and Rener Gracie, and he’s just a great guy with good energy,” Ellenberger said of Glendale, California coach Edmond Tarverdyan, best known for his work with women’s bantamweight champion Ronda Rousey. “We became good friends and the more I talked with him about fighting and concepts of certain things, the more I was intrigued. I was fascinated with just how well he knows combat sports in general, and from a strategy point of view, I never heard somebody who could dissect things the way he could. So that’s really what attracted me to working with him and the more I worked with him the more I wanted to continue to learn.”

For Ellenberger, his work with Tarverdyan served to rejuvenate a career that still saw him at the top of the welterweight division, but that was also teetering on the brink of disaster if he had more performances like the one against Canada’s MacDonald, a three-rounder in which Ellenberger barely resembled “The Juggernaut” that won eight of his previous ten UFC bouts, five by knockout. To his credit, the 29-year-old has no excuses for the loss.

“Rory is a tough guy to fight at his range,” he said. “If he can keep you at his range, he’s going to be a real hard guy to fight. I would definitely say I didn’t have the right strategy, but I also needed to have more of a sense of urgency in getting inside and being able to do what I do well. And the outside is definitely not where that is.”

In May, Ellenberger returned to the Octagon, and while he didn’t beat number one contender Robbie Lawler at UFC 173 in May, suffering a broken orbital bone in the third round TKO loss, he performed a lot better than he did against MacDonald, putting him back on the right track.

“The toughest part about that fight was coming off of a layoff,” Ellenberger recalled. “Whether people say it or not, it’s tough whenever you’re on the sideline for a while. But that was a lot of reward. You’re fighting the number one guy in the world, so we’re gonna do it. With 20/20 hindsight there are always things you could do better, but another exciting part about working with Edmond is that we made a lot of progressive steps. The result wasn’t what we wanted, but there was a lot of progression and we’ve built off that.”

You can hear the excitement in Ellenberger’s voice when he talks about the newest member of his team, and he says he feels the same way walking into the gym every day, a surprising development for the veteran from Nebraska.

“I’ve been fighting almost ten years now, and I started to see and really understand a lot of things that I hadn’t been able to really focus on,” he said. “And there were certain concepts that Edmond was trying to get me to understand. It wasn’t just like, ‘hey, let’s sharpen a skill here.’ It’s not really a skill thing as much as it is a concept or a feeling. And that’s so important in the fight game. So this last year has been about understanding new concepts,  having balance, placement of punches, putting accents on punches, and his whole striking philosophy has really blown my mind. It’s surprising to have a whole new perspective, but it’s good, and the more I can expand and learn, the better.”

Tonight, he gets his second chance to put those concepts to work in the Octagon as he faces young gun Kelvin Gastelum in the UFC 180 co-main event. Many believe that despite his unbeaten UFC record and his obvious talent, this is a bridge too far for the Arizonan. Jake Ellenberger won’t say it, but he most likely agrees.

“He’s a tough kid, and I love fighting wrestlers,” Ellenberger said of his foe. “I like fighting guys who you can kind of predict in a way. You know how they’re going to react. You pressure them and they’re going to do one of two things. I love the fight, and for me, it’s just letting it go. I’ve got to get in his face and I know we can make a fight for 15 minutes no problem.”

The Juggernaut is back.