Jake Ellenberger: A Headliner Once More 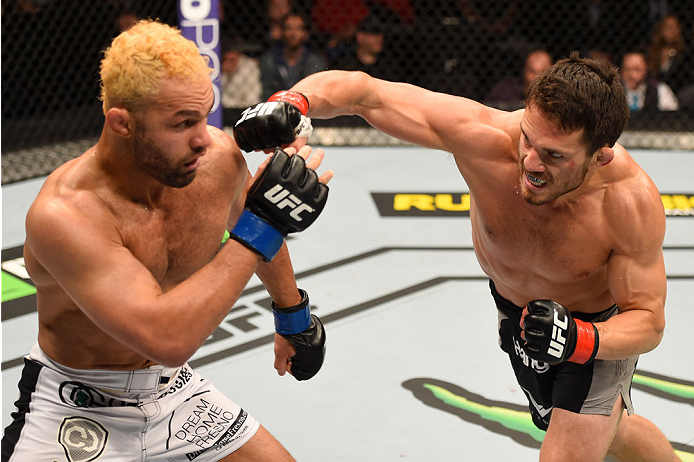 Jake Ellenberger promised us darkness in February, a trip that would show us the difference between the affable Nebraskan and “The Juggernaut.” And he was impressive in snapping a three-fight losing streak with a Performance of the Night submission of Josh Koscheck, but did we see “Darth Ellenberger?”

“There were glimpses of him, but it was still not as dark as we want it to be,” he laughs. “There’s signs, but there’s work to do. We’re moving in the right direction.”

That’s for sure, and though he didn’t get to show off everything he’s been working on, he was happy with his performance.

“Overall, I was,” he said. “It’s just funny, because as thoroughly as you can dissect every fighter and every matchup, there’s just so much unpredictability. It’s tough, but that can work to your advantage. For me, I always try to be completely different or at least bring something different to the table, so it’s not like someone already knows the cards you’re gonna play.

On Sunday in Las Vegas, Ellenberger will be back in a UFC main event for the first time since 2012, as the welterweight veteran will attempt to improve his number nine ranking when he faces Stephen “Wonderboy” Thompson. It’s an interesting clash of styles, pitting the dynamic striking of Thompson and the blunt force and wrestling attack of Ellenberger. The 30-year-old agrees that it’s a compelling matchup, but not in the way most observers see it.

“It’s interesting with Thompson because you don’t see guys of his style really even fighting in mixed martial arts at a high level,” he said. “There’s the karate, more of the traditional martial arts, and you really don’t see that often. So there are a couple ways we can make an analysis of this, and for me, I see where he’s had success, what works well, and a lot of the things he does well, it’s kind of like when a little kid throws a tantrum and wants the attention that comes with that behavior. That’s like his fighting style; it only holds the value you give that behavior. If you stand back and you’re a B.O.B (a form of punching bag), it looks great. ‘Wow, this is acrobatic, it’s this and it’s that.’ On the flipside, if you’re not a sitting target, if you’re moving, a lot of his game is just really nonsense. It’s a lot of distractions, a lot of movement, and that fighting style has the power you give it. I’ve dealt with guys like Rory (MacDonald) who do like to fight on the outside and have had success, but I’m really surprised, to be honest, that he’s competing on this level with his karate style.”

Now that’s some Darth Ellenberger stuff right there. He laughs, explaining that he’s not trying to insult his opponent’s style, only that he thinks it won’t work against him on Sunday night.

“It’s not even for me to be disrespectful or make fun of it, because it’s really fun and cool to look at,” Ellenberger said. “I’ve done some stunt work before and he would be perfect for it. But not for mixed martial arts, it’s not. He’s gonna realize that. It’s a lot of distraction.”

That’s something Ellenberger, a new father, is not going to deal with anymore. Even though fighting the best night in and night out is going to produce its share of losses, as well as wins, after snapping his recent cold spell, this longtime contender feels like he’s got his mojo back and is on the path to making sure the victories far outweigh the defeats.

“There were some setbacks,” he said. “But you can talk about wins and losses and having faced some of the best guys in the division and coming up short, and it’s still all about moving forward. So I really didn’t lose anything, but I’m definitely back with the momentum moving forward and with that swagger.”