Jake Ellenberger - Have Gloves, Will Travel

“I love to compete and I have a passion for it. The last six years I've been focused on competing, training and getting better. It has kept me busy and kept my mind busy.” - Jake Ellenberger 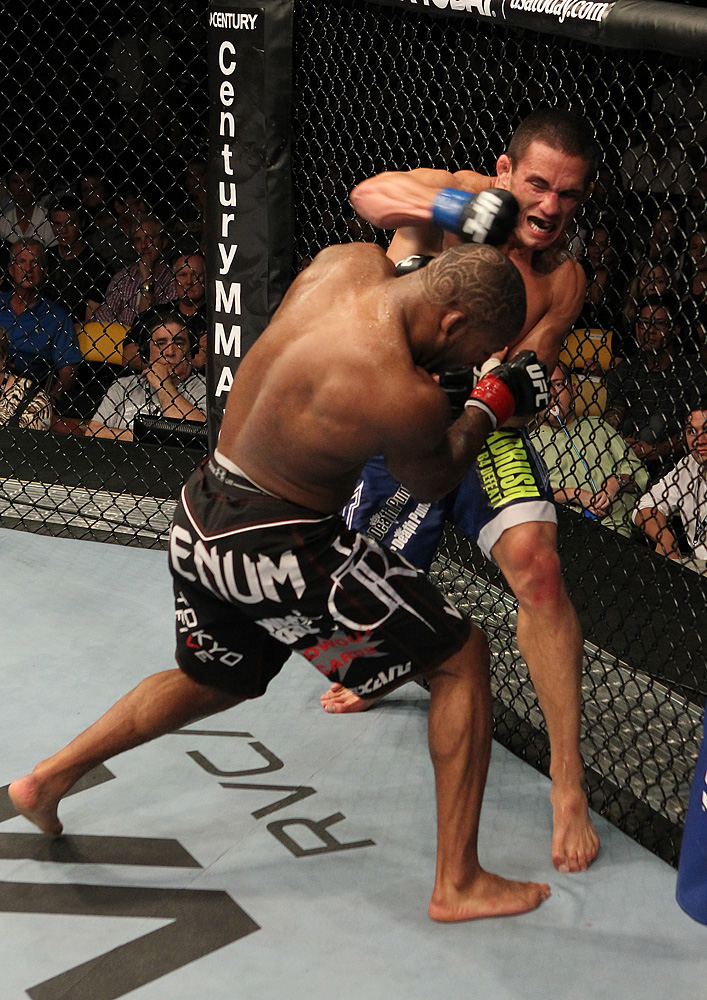 A lot of fighters may preach they have the same “whenever/wherever/whoever” personality, but only a select few back it up as emphatically as the 26 year old Ellenberger does. On Tuesday, April 12th, fellow UFC welterweight Brian Foster received the unfortunate news that he failed the required MRI to fight at UFC 129 against Sean Pierson. On Wednesday, Ellenberger immediately took the vacated spot on the Canadian’s dance card.

“I was training with a buddy of mine, Jason Brilz, and my manager called me with the opportunity to fight on April 30th. I said yes before I even knew who it was against. That's it. I'm always ready. I was more than happy to jump in.”

Now, Pierson and Ellenberger are set to tango in the Octagon in front of a record setting crowd of 55,000 at the Rogers Centre in Toronto. “I'm in shape and I'm ready to go at anytime,” bluntly states Ellenberger. And to him, it’s that simple. He’s a fighter, he trains to fight, he was offered a fight, and he took the fight. “It doesn't matter who the opponent was for me. I just want to get in there.”

It gets better. “The Juggernaut” is riding a three fight win streak in the UFC with his most recent victory over Carlos Eduardo Rocha coming in a hard fought split decision at UFC 126, which was in February. Not only is Ellenberger taking this fight against Pierson on 17 days notice, but he just fought and won two months ago. Also, there were reports that Ellenberger injured his hand in the Rocha fight and could be out until August. But “The Juggernaut” doesn’t care about any of this.

“All I needed was to get an X-Ray. When I got home I got one and my knuckle was broken. It got cleared like a week later, so it was never an issue. It kind of got blown out of proportion. I was back in training two weeks after the fight. I trained throughout all of March. So, I had about an eight week training camp, but it was a lot less stressful because I didn’t have an opponent set.”

Taking fights on short notice isn’t anything new to him. Even his debut in the UFC was only on a month’s notice against a top ranked opponent: Carlos Condit. The fight ended in a controversial split decision in favor of Condit, but it promptly marked Ellenberger as another serious contender in the UFC’s ultra-competitive 170 pound division.

He almost prefers it this way. This extra hardship is a mix of constant competition and endless motivation that keeps Ellenberger razor sharp as a fighter both physically and mentally. “If you’re training as consistent as I am, two weeks or eight weeks, you're still going to fight on a Saturday night and test yourself against a high level guy and that's it. I'm ready to keep testing myself and climb my way to the top and prove I'm one of the best guys in the division.”

The details of the fight don’t matter to Ellenberger because he is in the Octagon simply to challenge himself. “It's a test against myself,” he explains, noting that his view of fighting is physical problem solving through determination. “How am I going to deal with this adversity and find a way to win? Studying film and tape is nice, but when you get in there it is going to come down to who wants it more and who is going to find the way to win. It's a battle of will, it's a battle of heart. Basically, who has got the bigger balls is going to win.”

On top of that, there is always the question of how long a fighter can keep competing, so Ellenberger wants to get in as many fights as he can. “This is not a sport of longevity,” admits Ellenberger, who fully realizes fighters with long careers like Randy Couture are the exception and not the rule. “I love to compete and I have a passion for it. The last six years I've been focused on competing, training and getting better. It has kept me busy and kept my mind busy.”

Specifically in the past year, he has been keeping himself busy training on and off in California. Ellenberger’s base on the left coast is the Reign Training Center with Mark Munoz. Ellenberger has also been sharpening his standup with famed Chute Boxe striking coach Rafael Cordeiro at Kings MMA. In training for his welterweight bouts, Ellenberger gladly battles against middleweights like Munoz to heavyweights like Fabricio Werdum.

“Most of the guys out in California are bigger than me. They pose a lot more issues. They're taller, they're stronger and they make me work a lot harder. There are lighter guys I train with who are quicker. I like to mix it up with both. But training with the stronger heavier guys who are harder to move, when I’m in a fight at welterweight I can move better because I'm used to working a lot harder. That gives me an advantage.”

One advantage Ellenberger won’t have in the April 30th rumble is the crowd cheering for him, but, again, he doesn’t seem to care. “I'm kind of used to being that guy, being the bad guy,” says Ellenberger about fighting against the 11-4 Pierson in his hometown of Toronto. “I've been to Japan and Korea and fought guys in their country. I could fight in front of 5 people or 70,000. No matter where the fight is, they’re getting in there to fight you.”

At UFC 129, it will be the 30th professional fight for Ellenberger in six years’ time. It’s an incredible 24-5 record he’s built relying on his own abilities to overcome any adversity no matter the cost. Ellenberger even threw himself into those first couple fights without proper MMA training other than watching Rob Kaman striking DVDs in his basement. For Ellenberger, his opponent, Pierson, is just another name for him to prove himself against.

“I don't really know a lot about him. He's obviously here for a reason. He won his last fight and I'm sure he is going to be ready. I really haven't seen much of anything on him. For me, it doesn't really matter. I'm going to go in there to find a way to win because that's what I'm good at.”

That’s what Ellenberger is there to do: win. Whether “The Juggernaut” does it by TKO, submission, or decision - he doesn’t care.