"I’ve always been honored to be a part of and to compete in the UFC, and now to headline an event in my hometown is fantastic." - Jake Ellenberger 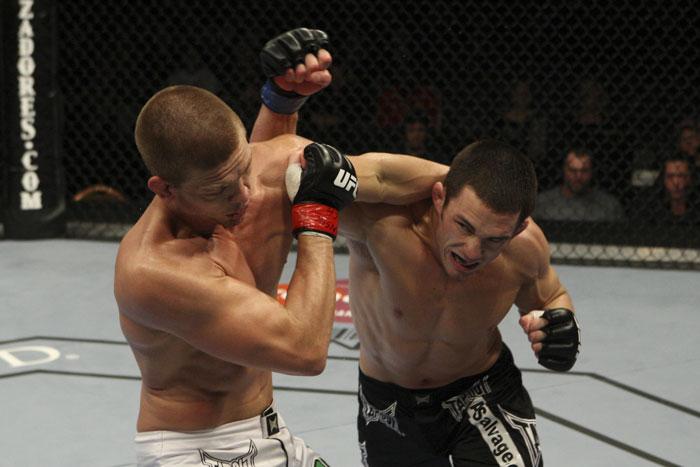 Last year, the song “Coming Home” became a staple on the mixed martial arts circuit. Whether in their home state, province, city, or town, the man born Sean John Combs and his band Dirty Money echoed through countless venues, providing the soundtrack for numerous fighters as they made their walk to the cage.

Jake Ellenberger could choose to bump the man who brought Biggie to the masses as he makes his way to the Octagon on Wednesday night, as for the first time in more than six years, the Omaha native is fighting at home.

Back then, the 26-year-old University of Nebraska at Omaha product was a perfect 6-0, preparing to take on Brian Daley in the main event of All Fighting Championships 4: New Hitter.

A lot has changed since then.

Ellenberger returns home with a 26-5 record, headlining his second consecutive UFC event, and riding a five-fight winning streak. He’s 9-1 over his last ten fights and hasn’t tasted defeat in more than two years, dating back to the back-and-forth battle with new interim welterweight champion Carlos Condit that marked his debut on the sport’s biggest stage.

Heading into the UFC’s debut event on FUEL TV, the welterweight division remains under construction.

Champion Georges St-Pierre is on the sidelines after being on the surgical table, his return not expected until late in the year. Nick Diaz lost a close fight to Condit on February 4th, and is now staring at a suspension, while perennial contender Jon Fitch was starched on the second to last day of 2011, leading to Johny Hendricks making a rapid move up the 170-pound ranks.

Ellenberger is a part of that group at the top of the heap, a victory over Diego Sanchez Wednesday night at the Omaha Civic Auditorium potentially all that’s standing in the way of a rematch with Condit and a chance to claim UFC gold.

“I can’t really… I don’t really know the emotion,” admitted Ellenberger when asked what it would be like to get a victory in the UFC in his own backyard. “I’ve put so much work and dedication in; I’m just really excited to show that. I’ve always been honored to be a part of and to compete in the UFC, and now to headline an event in my hometown is fantastic. It’s extremely exciting, for sure.”

Fighting in Omaha will also give Ellenberger a chance to compete in front of his family and friends, including his mom, who wasn’t exactly thrilled when her son announced that he wanted to be a professional cage fighter.

“When I first said I wanted to fight, my mom was pretty against it. I was living with her at the time, and she actually kicked me out of the house. She said, `If you’re gonna fight, you’re not gonna live here.’ I said, `Alright, see ya.’”

Ellenberger laughs, and then makes it perfectly clear that both he and his twin brother Joe, a 12-1 lightweight, have full parental support when it comes to their fighting careers.

“She’s become a lot more educated (about the sport since then). My brother had been competing in wrestling most of his life, and we were always very, very competitive, so eventually she just came to be a big supporter. Both my parents are actually huge supporters of what we do.”

While Joe returns in regional action early next month, Jake is ready to take the next step towards becoming UFC welterweight champion, a journey that began in earnest when he decided to pack his things and move to California to train full time.

“The decision was easy. I had made a lot of friends out there, so the move was a pretty simple choice. I’m focused on becoming a world champion, so I’ve surrounded myself with the best coaches and fighters I can. I’ve gained more, and become more of a fighter in the last year than I have in my other six-and-a-half years fighting.”

The powerful welterweight known as “The Juggernaut” has spent the last year training alongside Mark Munoz, Jason “Mayhem” Miller, and Kryzsztof Soszynski at Munoz’s Reign Training Center, as well as working with legendary Chute Boxe Academy founder Rafael Cordeiro and the collection of all-stars at Kings MMA. It’s a combination that has instilled Ellenberger with a great deal of confidence as he continues on his quest to stand atop the welterweight division.

“It’s a good feeling out there with really good people – Mark Munoz, Rafael Cordeiro, guys that are just awesome to be around. There’s definitely an energy about some of the guys that I’ve been around, and I think it’s going to be the deciding factor in becoming a champ.

“I want to fully maximize my potential. I kind of look at the guys that I train with and my coaches (and think), `Why wouldn’t I be confident?’ At Kings (MMA) when I spar, I fight against some of the best fighters in the world every day, so when I go into a fight, my confidence is huge.

“For now, I’ve really just tried to focus on one fight at a time, control what I can control, and move forward with each fight. I’m in no hurry. I’m young, and I’m still learning — I’m learning every day — so I’m just focused on Diego.”

After being upset by British prospect John Hathaway in his welterweight return, Sanchez has climbed back into contention on the strength of back-to-back wins over Paulo Thiago and Martin Kampmann.

The man who won the middleweight competition on the inaugural season of The Ultimate Fighter has always been a crowd pleaser because of his aggressive approach in the cage, a quality Ellenberger has come to respect in his opponent.

“The thing I respect about Diego is that anybody he’s ever fought, he’s always come to fight. There are not a lot of guys like that; there really isn’t. Win or lose, he’s going to fight. He’s a goer; he’s a straightforward guy, and I’ve always respected that about him.”

Wednesday night’s main event stands to be an explosive and entertaining affair.

Not only has Ellenberger collected consecutive first-round knockouts, and four finishes during his current five-fight run of success, but each of Sanchez’s last four victories have earned he and his opponent a Fight of the Night bonus, with his epic encounter with Clay Guida being recognized as Fight of the Year for 2009 by numerous outlets.

The hometown favorite is prepared for whatever his meeting with Sanchez may bring, and promises to give the partisan crowd something to cheer about at the end of the night.

“I feel like I can win this fight anywhere that it goes, and I’m prepared to fight the whole time. It kind of goes back to that confidence — I’ve been fighting against some of the best Muay Thai guys and some of the best wrestlers in the world every day, so I’m confident that there’s nothing he’s going to bring that I don’t see everyday or haven’t seen before, truthfully.

“I’ve prepared for the long, grueling, not fun fight, but that’s how we do it, you know? That’s what we train for. I know I’m going to win this fight. I can’t tell you when and how, but I will leave with my hand raised, there’s no doubt about that.”