Jake Ellenberger: Bringing the Fight Back 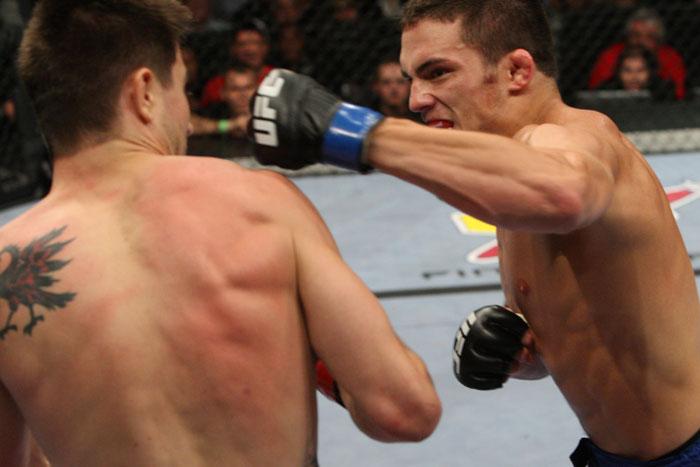 It’s the question no fighter wants to hear, but one they all get, especially after three consecutive losses. Jake Ellenberger doesn’t mind getting the “is this a must-win fight” question though, and the reason is simple.

“To be real, your job is really always on the line,” he said. “When are you ever in the clear? Perception is not reality. Every fight is important and I feel as though this is more than a fight, more than a sport, and some of my problem in the past has been looking at this as more of a sport and not taking it as seriously as I should.”

When you can look at your losses and see where you went wrong, it makes sense to have an attitude like that, and with Ellenberger always being one of the sport’s straight shooters, it’s no surprise that he can take such queries with a grain of salt, answer them, and move on.

“Everybody’s like ‘how important is this fight?’” he said. “Every fight’s really important. (Laughs) I’ve never really been sensitive to things like that. It’s kind of like being on a win streak of three or four wins; what does that matter either? Every fight is so different and so unique in its own way and that’s the beauty of our sport – things don’t always add up, but every fight you think a little differently and obviously every opponent is a little different. I never have a hard time looking at myself in the mirror. I know I put the work in. Some people are little bit more fragile, I would say, in talking about specific things. For me, it’s never been an issue.”

What has been an issue for Ellenberger over the course of defeats against Rory MacDonald, Robbie Lawler and Kelvin Gastelum is that “The Juggernaut” rarely made an appearance. You know that guy, the one with bricks in his hands whose UFC record includes crushing knockouts of Mike Pyle, Sean Pierson, Jake Shields and Nate Marquardt. The 29-year-old Nebraska native would even go as far to say that we haven’t truly seen him yet.

So what now? For Ellenberger it means finding what he calls a “dark place” and going on from there once the bell rings.

“It’s put a different perspective on fighting as actual combat and life threatening,” he said about the work he’s been doing during this training camp that has nothing to do with left hooks and right crosses, and everything to do with the mental part of the sport. “I’ve tended to be a little bit too relaxed and not view things maybe the way I should. Even with my last fight (against Gastelum) specifically, I get too relaxed in certain positions or I don’t really feel threatened, and in a way I can kind of look past somebody. But it’s all about your mind. It doesn’t matter how much skill or talent you have, and for me I focused on my psychological development. I don’t need to learn how to fight; it’s getting out of a box and finding that dark place inside of me and mentally evolving a little bit.”

This Saturday, Ellenberger gets a chance to put this new attitude to the test against another welterweight veteran looking to get back on track after dropping three straight as well. It’s a UFC 184 main card bout that is getting plenty of attention, but Ellenberger wants to make it clear that the fighter fans will see this weekend will bear little resemblance to the one they have seen in the past.

“No one buys a ticket to watch Jake Ellenberger talk or fight,” he said. “It’s “The Juggernaut,” the savage guy who doesn’t care, and that’s what we’re trying to bring more out of.”

It’s an intriguing proposition, and while the world knows that what happens inside the Octagon is a lot different than what happens outside, hearing about this transformation to “Darth Ellenberger” from one of the game’s nice guys is still very compelling.

Maybe, but he expects that to change at STAPLES Center on Saturday, and he promises that the fans will be happy with what they see when the bell rings.

“It’s been too much of a position battle,” Ellenberger said. “Nobody likes to watch that. In fighting, people don’t pay $55 to watch a Pay-Per-View of a guy who’s going to outposition a guy. That’s the reality. And to finish fights, you have to take risks and that’s one of those balances you have to find. You gotta be able to touch that dark side of yourself and really become a soulless freak. And that’s where I’m going to find more success in this sport.”

Ellenberger isn’t the only fighter looking to go back to a time where a fight was over when it was finished and not when three or five rounds were over. Yes, it’s a sporting event with rules and everything else that goes along with it. But it’s also a fight.

“People get this misconception of what fighting is,” he said. “It’s not a baseball game where everyone gets a ribbon and a snack at the end of the game. Somebody’s gonna lose, somebody’s gonna get hurt or knocked out. And that’s the most important thing for me as a fighter – how I view this sport. If I look at it as a sport and say I’m going to outpoint this guy and win all three rounds, that’s not the way it’s gonna work and usually it’s not gonna come out the way you hope it does.”

It does take two to tango though. Is Koscheck the guy who will match him in that quest for a fight with a definitive end?

“It’s hard to say,” Ellenberger said. “I believe so. But who knows. I’ve watched a lot of his past footage and he gets a little bit tentative against guys who are risk-takers or more powerful. But he’s in the same position I am. He’s in unfamiliar territory, so I feel like he’s going to probably match me.”

If so, as Mike Goldberg would say, “We’ve got ourselves a fight.”