"This is way too hard of a lifestyle and a sport to be in
if I'm not world champion. Who do I have to fight to fight for the
world title? And they gave me Rory, and I said let's do it." - Jake Ellenberger 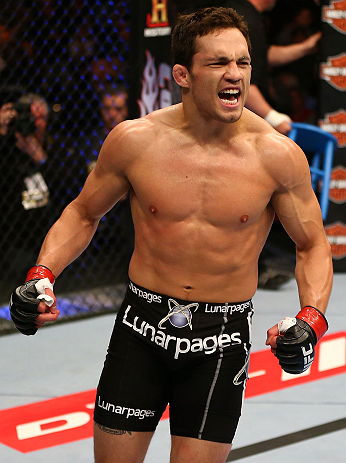 No one will ever argue that Jake Ellenberger can’t turn a phrase or two, but the bite of “The Juggernaut” remains much more powerful than his bark.

In the lead-up to his co-main event scuffle with Rory MacDonald at UFC on FOX 8 this Saturday, Ellenberger said his fashion-conscious opponent could win a “Tears for Fears” look-a-like contest and he should “prepare for some horizontal television time”. Clever and humorous enough that even the butt of the joke, MacDonald, had to laugh. It was a rare piece of trash talk that has consumed a lot of attention for a welterweight war, which has headlining potential on its own merit.

While many have become transfixed with those couple sound bites in particular, what appears to have gotten lost in the wash is how much weight Ellenberger’s latest win over Nate Marquardt carries. A first round Knockout of the Night-awarded win only a few months old against a veteran top contender and former Strikeforce welterweight champion was only the second recorded knockout of Marquardt in a stellar professional career spanning 46 fights in 14 years time. The only other person to defeat “The Great” by KO is potentially the best UFC fighter of all-time Anderson Silva, which was in a UFC middleweight championship bout.

And, Ellenberger did it 15 pounds lighter and 110 seconds quicker.

“Nate is a guy who I've watched for a long period of time and have looked up to,” tells Ellenberger. “He's a pioneer for the sport. He was the Strikeforce welterweight champion. He's fought the best guys in the world in more than one weight class. I don't think Nate gets enough credit for what he's done in the sport, in my opinion. To be able to compete at that top level for as long as he did and still is doing is something in and of itself. Going into that fight, I knew I had to stay focused on myself. I know that sounds a little selfish, but I need to focus on what I do well and focus on getting the fight to where I'm comfortable. I went into that fight extremely confident for sure.”

A little over a week before he turned 28 years old, Ellenberger fired off a three punch combination at UFC 158 that resulted in Marquardt’s face planting into the canvas. A straight right that put “The Great” defensively against the cage, a grazing left that propped Marquardt’s head-up, and a jaw-jarring right hook, which added another W to Ellenberger’s record and $50,000 to his bank account. It was an enormous and decisive victory against an opponent who in his past 15 fights inside the Octagon plus two in Strikeforce had only been beaten four times by the judges’ scorecards and once by the near-mythical Silva more than half a decade ago. And yet, why does it feel like this win has gone under the radar?

Maybe the answer is that “The Juggernaut” made it look too easy.

“If you have a war, people think it was a tough fight,” says Ellenberger, who is a proven fight finisher with 23 stoppages (20 KOs, 3 subs) in 35 pro bouts, with most never sniffing a third round. “I don't mind having that problem that I'm finishing guys; that's a good problem to have. The credibility factor of a win is somebody's opinion. There are so many other variables that come into a fight.”

The former Lance Corporal in the U.S. Marine Corps and NCAA Division II wrestler from University of Nebraska-Omaha has a history of rising to the challenge to make the toughest fights appear easy. In his short notice UFC debut in 2009, Ellenberger took on former interim UFC welterweight champion Carlos Condit and pushed the action from bell-to-bell to a very controversial split decision loss. After four wins inside the Octagon later, and in his first of three main events, Ellenberger KOed Jake Shields in 53 seconds just seven months following UFC welterweight champion Georges St-Pierre needing a full 25 minutes to best Shields. Still to this day, Ellenberger knows one of his stiffest tests he has ever faced was also his fastest win in the nine second KO of famed Muay Thai kickboxer Jose Landi-Jons.

The brevity with which Ellenberger has won shouldn’t reflect poorly on the opponents; it should only demonstrate the potential of how dangerous and demolishing “The Juggernaut” can be.

“Every fight is tough, especially at this level,” explains Ellenberger. “I prepare for the worst and hope for the best. You never know how any fight is going to go. I have had so many types of fights that I never thought would happen like that when I was going into them. My fight versus Jose Landi-Jons. He was one of the meanest and best guys on the planet at one time. There are stories of him in Brazil beating Anderson Silva. It was one of the toughest fights of my career and I was expecting one of the toughest fights of my career and it was the fastest fight of my career. Same with Nate Marquardt. We were expecting an extremely tough fight. When has Nate ever not been a tough fight? Never. I could fight Nate tomorrow and he'd be a tough fight. But expectations are high on myself, and what I expect from myself is high for sure. I'm preparing for the worst and hoping for the best and expecting to do whatever it takes to the win.”

Up next for Ellenberger is Saturday’s showdown with St-Pierre’s protégé MacDonald at UFC on FOX 8. At 24 years old, the product of Tristar Gym in Montreal is ranked #3 amongst the UFC’s welterweights - one spot better than Ellenberger. After going undefeated on Canada’s local circuit, “Ares” has gone 5-1 inside the Octagon, with notable one-sided decision wins over Nate Diaz and former UFC welterweight champion BJ Penn. Beyond that, MacDonald has been routinely praised by St-Pierre and prophesied by the current champ to one day take his spot on top of the 170-pound mountain.

“Definitely a talented kid,” reveals Ellenberger. “I have seen the way he's been pushed because of being in the same training facility of Georges St-Pierre and I understand that for sure. He's definitely a talented kid. Is he top five? Absolutely not. I've been told that a win over Rory would make me a number one contender. I don't want to waste my time. This is way too hard of a lifestyle and way too hard of a sport to be in if I'm not world champion. Who do I have to fight to fight for the world title? And they gave me Rory, and I said let's do it.”

In preparation for MacDonald, Ellenberger is an Omaha transplant in Southern California at UFC middleweight Mark Munoz’s gym, Reign. There’s also an incredibly familiar face, quite similar to his own, who battles with Ellenberger daily at the gym just as they’ve done their whole lives: his twin brother Joe, who has a 14-1 pro MMA career of his own. To sharpen his standup, Ellenberger has worked extensively with Muay Thai coach Rafael Cordeiro and boxing coach Carlos Ruffo to get his hand speed up, increase his defensive head movement, and make his overall striking more unpredictable. The owner-operated soul of the gym is most definitely Munoz, who has become a training partner, mentor, and friend to Ellenberger.

“Reign is my home gym,” affirms Ellenberger. “I've been working with Mark for three years now. It's been crazy. We've been through a lot together. Through training, through relationships. He's somebody I can depend on and I can count on. It's good to have that friendship and that relationship with somebody. He's definitely been a big pillar for my career. Everyone on the team at Reign is very close. There's not that ego. Everyone wants to get better, but they're there to help each other out and help each other grow. I owe a lot to a lot of people at the gym. If I can give some of my knowledge to the other people, I absolutely will. It's definitely growing and continuing to grow.”

This Saturday in Seattle, Washington, a co-main event collision between “The Juggernaut” and “Ares” could possibly decide who is next in line for a welterweight title shot. “With each step that I'm taking, the picture becomes more in focus and more clear,” asserts Ellenberger, who aims to trump his destruction of former champion Marquardt with the derailing of MacDonald’s hype train.

If the impending action of these two uber-athletes attacking each other isn’t enough, “The Juggernaut” did have one more sound bite to whet the appetite: “Hopefully, he wears one of those beefy sweaters at the press conference - I'll have to stretch it out.”