Jake Collier Wants To Put On A Show WIth Arlovski

After well over two years on the sidelines, Jake Collier made his return to the UFC Octagon in the summer of 2020, venturing to Fight Island to take on British heavyweight newcomer Tom Aspinall.

He’d won his previous outing at light heavyweight, out-working Marcel Fortuna before elbow surgery put him on the shelf. He’d stay there for 987 days, and when he finally got the chance to step back in the cage, it lasted all of 45 seconds.

“Aspinall slapped the s*** out of me,” said Collier, laughing, reflecting on his road back to life as an active UFC fighter.

To be fair, Aspinall has done that to everyone he’s faced inside the Octagon thus far, adding four additional victories to his resume to climb into the Top 5 in the heavyweight rankings. Additionally, that quick, one-sided loss gave Collier the motivation he needed to make a massive change in his life.

“I quit my job after that and just went full-time on this,” said the 33-year-old heavyweight, who makes his second start of the year this weekend opposite veteran stalwart Andrei Arlovski. “I was working 10-12 hours a day, welding, carrying steel all day, and then I was trying to train, and it all kind of sucked.

“This is the big leagues and if you ain’t putting 100 percent into it, you ain’t gonna win.”

A loyal, blue-collar guy, Collier said his phone call to the folks at Stillwater Trailer Manufacturing was one of the scariest things he’s done in his life, not only because he was walking away from a steady paycheck and a job he’d maintained since he was 18 years old, but because he knew that a loss in his next fight could potentially lead to his being released by the promotion.

But he wasn’t happy and knew that something needed to change, so he hung up his welding mask and became a full-time fighter for the first time in his career to prepare for Gian Villante.

“I knew it was a good matchup for me and I just had to put everything into it,” said Collier, who began his career at middleweight, amassing an 8-1 record before getting called up to the UFC at the end of 2014. “I knew, ‘If I lose this fight to Villante, I’m probably going to get cut, so I’ve got to put it all in there and really, truly believe in myself.’ 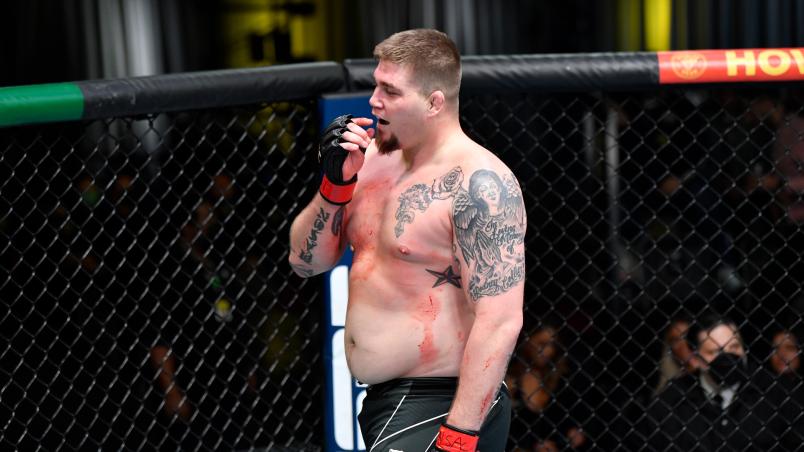 “I had a good training camp, went out there and performed well, and that was the beginning of it; that kind of got the ball rolling.”

Collier won the fight by unanimous decision, earning 30-27 scores across the board to register his first victory at heavyweight. While he dropped a split decision to Carlos Felipe in his next appearances, the Missouri native was not only happy with the early returns of his shift to going all-in on his fighting career but was glad to be an active part of his family’s life once again.

“It’s a lot better because I get to see my kids a lot more, plus I had to work on the weekends a lot, too, so I had to miss a lot of soccer games and wrestling tournaments,” said the proud father of three boys. “It all sucked, and you look at it and think, ‘Why the hell am I doing this? Why the hell am I putting myself through all this?’

“But you also don’t want to be 50 years old and let’s say I retired from fighting, stayed welding — I don’t want to be looking back like, ‘What the f***, man? I could have been good if I’d have just had the balls to do it!’

Moving to only working one job also gave Collier time to think about his future in the cage, and what would be best for him going forward in terms of where he would fight. 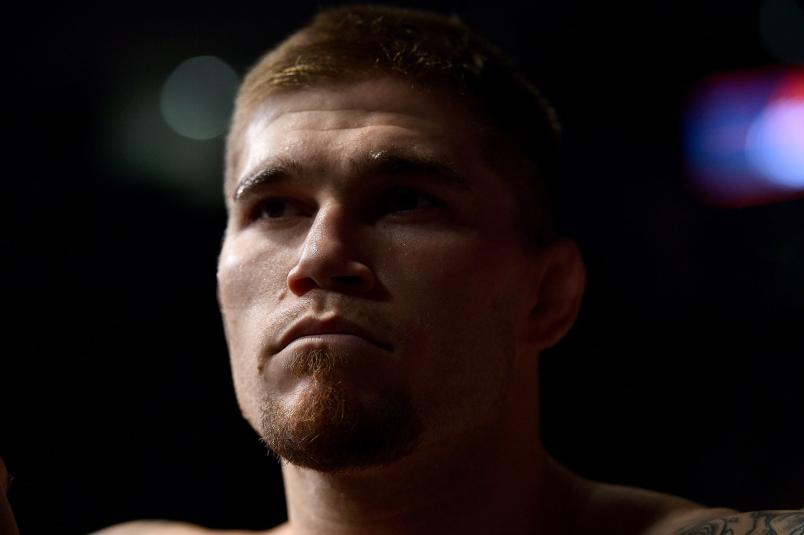 When he initially returned, the former RFA middleweight champion envisioned a return to light heavyweight, viewing the Aspinall battle as a one-off stop in the big boy ranks that would allow him to get back into the cage and shake off the rust before shedding some weight and pushing forward in the 205-pound ranks.

But he felt good in the gym and when he went live with Villante and Felipe, it prompted him to stay at heavyweight and work on dialing things in to give himself the best chance to enjoy consistent success inside the Octagon.

“I honestly thought I would go back down to 205, but I’m naturally a pretty big guy,” said Collier, who first turned to mixed martial arts as a means of losing weight as a 19- or 20-year-old kid tipping the scales at close to three bills. “Now I feel comfortable. I feel strong. I feel healthier, I feel like I can take a bigger punch; everything is a lot better, and I’m fast at heavyweight.

“There are a lot of advantages for fighting smaller, so I’m used to going with guys that are ridiculously fast on the ground and sparring, but then I go with heavyweights and they hit hard, but they’re not as fast.”

Back in January, Collier turned in his best effort since returning, collecting a first-round submission win over Chase Sherman that earned him a Performance of the Night bonus.

Even better, he predicted the finish to his coach before they made the walk to the cage.

“Going into that fight, I was very confident,” said Collier, who moved to 13-5 with the first-round finish. “Chase is a big, strong guy, good striker and stuff, but I felt like I was better everywhere than him. I knew he throws kicks and I told my coach, ‘If he throws some lazy-ass body kick, I’m taking him down, and I’m going to smash him on the ground.’ And that’s what happened.

“I don’t show my ground game very much because I like to stand and put on a show, but my ground game is pretty good,” he added. “It felt good. It was a very dominant win.”

This weekend, Collier looks to keep the momentum rolling when he steps into the cage with the venerable veteran Arlovski. 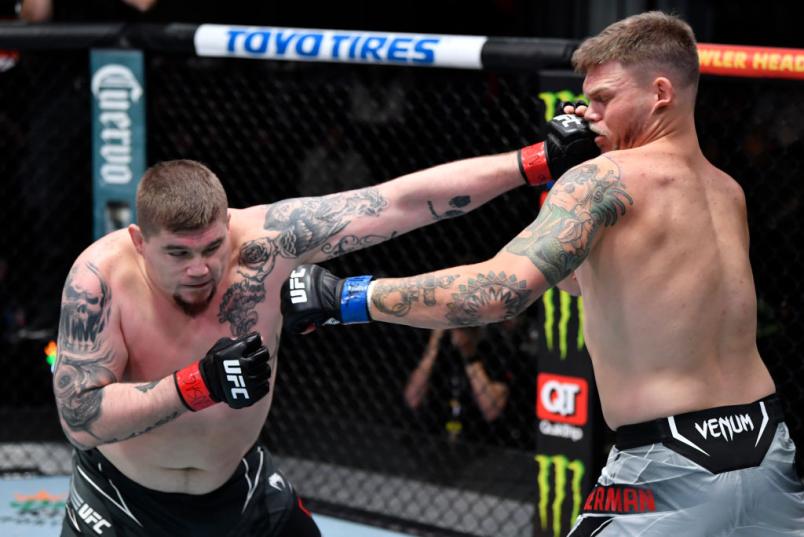 Originally slated to face Australian banger Justin Tafa, the 43-year-old former champion stepped in when Tafa was forced out of the bout. Though he’s more than 15 years removed from his championship days, Arlovski remains an active, dangerous presence in the heavyweight division, entering Saturday’s contest on a three-fight winning streak and having garnered victories in five of his last six outings.

“I watched him when I was a kid,” Collier said excitedly when asked about sharing the cage with Arlovski. “No insult to him — the dude’s a legend and I think it’s an honor to fight him.”

In the cage following his win over Sherman, Collier mentioned Arlovski as a potential dance partner, clarifying at his post-fight media availability that it was prompted by his gritty battle with Sherman and the way it lined up stylistically. It may not have been the original plan, but he’s gotten his wish nonetheless, and now he can’t wait to get out there and share the cage with the steady divisional mainstay.

“It’s going to be a good fight,” Collier began. “Arlovski is a gamer, so I hopefully we put on a helluva show and we get some bonuses.

“He’s more of a technical fighter now, he’s a lot smarter — he stays long, he moves well, and he’s always thrown good kicks. He doesn’t get hit as much, so kudos to him, but I’m going to try to pressure, cut him off, and be in his face.”

More importantly than getting to share the Octagon with Arlovski, Collier is just happy to already be making his second appearance of 2022.

He logged two fights in six months during his first year back, but only stepped into the cage once in 2021, and is the kind of guy that would like to stay as active as possible.

“I like (staying active) because I hate the long layoffs,” he said with a laugh. “You’ve got no light at the end of the tunnel. You’re training every f****** day, you’re putting your body through all this, and thinking, ‘Man, I hope they call soon because I’m getting tired of driving all the way down here doing this s*** and seeing these guys.’

“I don’t turn down fights,” he added. “If you call me, I don’t even know why you’re calling me; just send me the contract because that’s the kind of guy I am. Nobody sucks in the UFC. It’s not like you’re gonna hand pick a duck — ‘I think this guy is trash!’”

Even though he still needs to sort things out with Arlovski this weekend, the former prospect turned full-time heavyweight wouldn’t mind getting one more in before the summer kicks off.

“I’d love to fight in the next couple months again; let’s keep it going,” said Collier. “This is my job. I’ve put the work in.

“And I think my wife wants to go on vacation in August, so if we could slip one in before then, that would be great.”