From picking up mixed martial arts just to get in shape to making his UFC debut in front of an arena full of Brazilian fans screaming for his head, it’s been quite an interesting five years for Missouri’s Jake Collier, but he’s taking it all in stride.
“It’s been pretty good,” he chuckles. “I made it to the best promotion in the world.”

Collier, 26, isn’t the kind to get rattled by much, a fact borne out by his ability to make it to the big show even without a background in combat sports before his first visit to an MMA gym.

“Nothing,” he said when asked about his previous experience. “I kind of jumped into it one day.”

That one day led to another and another, and with coach Patrick Smith guiding him, the foreman of a welding crew turned pro in November of 2010 with a first round TKO of James Wade. He’s made it look relatively easy ever since, going 8-1 with seven finishes. But it’s hard work to get it to look that easy.

“My coach is on me night and day, always picking out the littlest things and making me correct them,” Collier said. “He really has a big part in that. There are some things you get frustrated with, but you want to be the best you can be, and sometimes I’m the hardest critic. So when I can’t get the hang of something, it gets pretty frustrating. But for the most part, it always works its way out.” 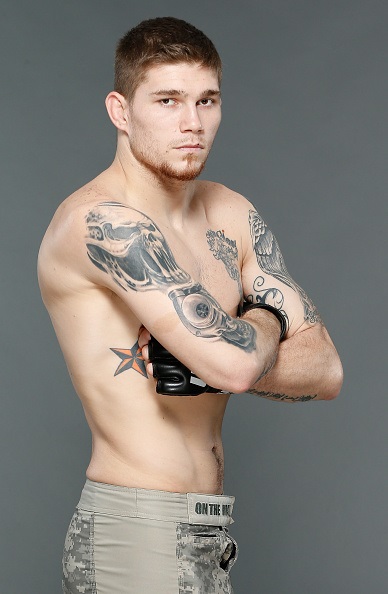 In October, Collier made his debut in the RFA, a promotion that has produced several UFC prospects in recent months, and after a first-round submission of Gabriel Checco, he became the latest to make the move to the Octagon.

“A year ago, a couple friends of mine got signed to the UFC, and it was kind of like ‘man, I wish I was there,’” he said. “But I’ve definitely matured as a fighter, and I think it’s good timing for me. I got my shoes wet in a big show with RFA, and now I’m in the UFC.”
> Check out the full Fight Night Barueri fight card

And in Barueri, waiting for Saturday’s bout with The Ultimate Fighter Brazil 3 finalist Vitor Miranda. Yeah, he’ll be the “bad guy” against the local favorite, but Collier isn’t too worried.

“It doesn’t bother me too much,” he said. “People can boo me or cheer me – none of that really matters to me.”

What does matter is getting the win and making a positive first impression in the UFC, and with Miranda making the move from heavyweight to middleweight, Collier believes his opponent will be in for a surprise.

“We’re going to be faster and more explosive,” he said when asked the differences Miranda will see in his new weight class. “We’re not one-dimensional, we can all mix it up. And the endurance and cardio that middleweights are gonna bring, I think it’s a little bit better than most heavyweights. Maybe not the higher-ranked heavyweights like Cain Velasquez, but for the most part, I think our explosiveness, endurance and speed is something that can catch him off guard.”

That may be a shocker for Miranda, but Collier will let him know one thing that he can expect for sure this weekend.

“Aggressiveness,” he said. “I’m just gonna come forward like I always do, throw my combinations and kicks, and he looks to be kind of the same guy, so I think it’s going to be a good fight.”