Quick knockouts and the desire to reach the top have helped Jairzinho Rozenstruik secure a main event against Alistair Overeem in his first year with the promotion.
By E. Spencer Kyte, on Twitter @SpencerKyte • Dec. 5, 2019

Jairzinho Rozenstruik signed his first UFC contract on January 2 of this year, accepting a short notice fight a month later in Fortaleza, Brazil.

Saturday night, the 31-year-old looks to close out his rookie campaign on the UFC roster with a fourth consecutive victory as he again steps up on short notice to square off with Alistair Overeem in the main event of Saturday’s return to the Capital One Arena in Washington.

“There are no words to describe it,” Rozenstruik said of his incredible breakthrough efforts over the past 11 months as he readies to share the cage with one of the most decorated fighters in the division’s history.

Everything started off relatively low key for Rozenstruik, as he ventured into the cage in February and emerged with a second-round stoppage win over Albini, ending the fight with an impressive combination of strikes that showcased his kickboxing background and established him as someone to keep tabs on in the wide open heavyweight ranks.

The buzz surrounding the unbeaten newcomer from the tiny nation of Suriname started to build following his sophomore showing in the Octagon, when he ventured to Greenville, South Carolina and needed just nine seconds to dispatch Allen Crowder. A sharp jab put Crowder on the canvas immediately and before the broadcast team could get settled in to call the action, referee Blake Grice was stepping in to stop the fight.

It reached a fever pitch less than five months later when “Bigi Boy” ventured to New York City for UFC 244 and made quick work of former champion Andrei Arlovski. Like the fight with Crowder, Rozenstruik sat the veteran heavyweight down with his first strike and never allowed Arlovski to recover, earning the finish just 29 seconds after the contest began.

“I didn’t expect it to go that fast,” admitted Rozenstruik, who has emerged as the most intriguing new arrival to the division since Francis Ngannou rocketed into contention several years ago. “I just put in work all those days, all those months.

“I did what I had to do and I was sharp and fit and as soon as someone makes a mistake, I drop them. I’m happy it has turned out this way and that I got this fight. I didn’t think it would be this fast, though.”

More UFC DC: Fighters To Look Out For | Fight By Fight Preview

Having already amassed three stoppage wins in as many starts, no one could fault Rozenstruik if he wanted to hit the pause button and enjoy the spoils of an already outstanding first year competing inside the Octagon, especially given that many of his contemporaries in the heavyweight division typically only fight twice a year.

But rather than coasting into next year on the high of his 29-second win over Arlovski, the streaking finisher quickly jumped at the opportunity to replace Walt Harris in the main event of this weekend’s fight card in the nation’s capital, eager to test himself against a heavyweight legend and see if he can add another chapter to what has already been a storybook run to start his UFC career. 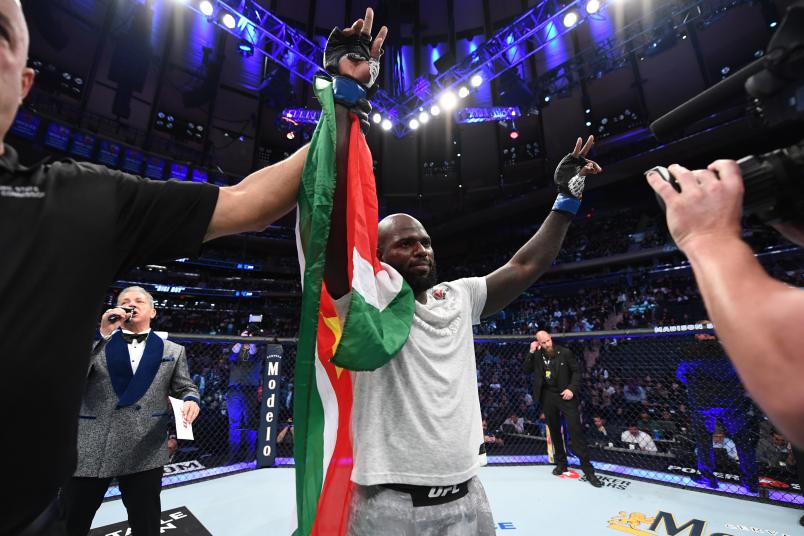 Jairzinho Rozenstruik of Suriname celebrates his KO victory over Andrei Arlovski in their heavyweight bout during the UFC 244 event at Madison Square Garden on November 02, 2019 in New York City. (Photo by Josh Hedges/Zuffa LLC via Getty Images)

“I just fought for 29 seconds; I had a good camp, no injuries and it’s a big opportunity,” said Rozenstruik when asked about the decision to hustle right back into the cage barely a month after his win in New York City. “I don’t know when I’ll get an opportunity like this again, so it was a perfect time and I think for Alistair, he’s happy he still has a fight.

“I’ve been watching him, playing as him on my PlayStation,” he said of the man he’ll face on Saturday. “He’s a legend — a big guy who is really famous who has done a lot for the sport and for kickboxing.”

Going from zero to burgeoning star with the chance to emerge as a legitimate title threat before spending a full year on the UFC roster is a lot to take in, and the sudden spike in recognition, fame and celebrity can be difficult terrain to traverse for anyone.

But coming from a small country and returning home to Paramaribo to see the positive impact and joy his success brings his family, friends, and countrymen has helped keep the surging knockout artist humble and focused on making a difference.

“I’m honored to introduce my country to millions of people around the world and bring happiness to everyone back home,” said Rozenstruik. “It means a lot for me, for my country, for my fans, my family — everybody. It’s a big deal.

“I’m always humble, I stay true to myself and don’t go too fast,” he added. “Growing up in the smallest country in South America isn’t easy, and with the things I do now, I’m accomplishing things I only saw in movies. I’m living the dream.

“We went to New York and I had only seen those things like Times Square from the movie Spiderman, and then suddenly I’m there in ‘The Big Apple.’ It’s great. I’m thankful for all of it and I try to just be myself.”

He’s also trying to continue his march towards the top of the heavyweight division and he’s already got an idea of whom he would like to face next should things go his way on Saturday night in Washington. 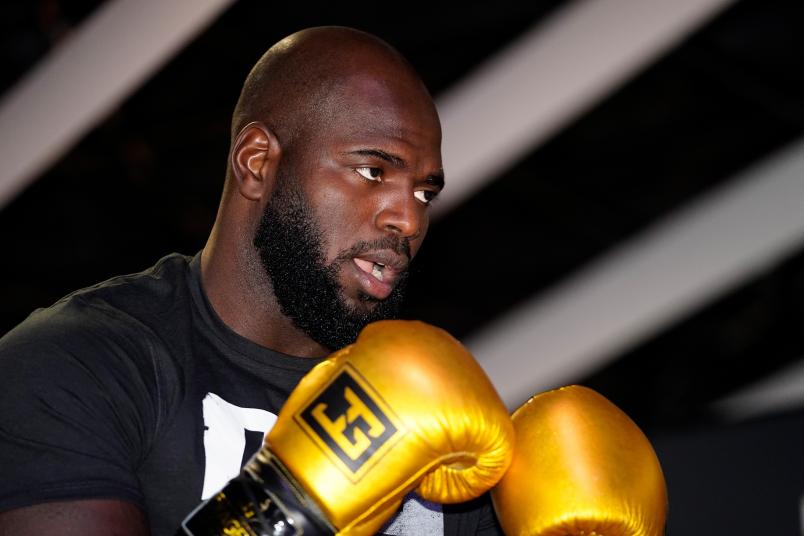 Jairzinho Rozenstruik of Suriname holds an open training session during the UFC Fight Night open workouts at Capital One Arena on December 4, 2019 in Washington, DC. (Photo by Jeff Bottari/Zuffa LLC via Getty Images)

“(Alistair) is a legend — it means a lot to get this opportunity and to fight against him — but it’s my time now,” said Rozenstruik. “I’m here to shine. It’s the heavyweight division — it can all end in one second with heavy punches going back and forth, so I want to beat this guy and make sure that I get my hand raised after this fight on Saturday.

“This win will bring me closer to the championship and that’s what I want to focus on,” he added. “After this, I want to fight this big, scary guy Francis Ngannou; that’s what I’m looking forward to after this one.”

Three fights, three finishes and a chance to beat Alistair Overeem in a main event showdown all within his first year on the roster, with designs on sharing the cage with the last menacing knockout artist to descend upon the division as his dream way of kicking off his sophomore campaign.

How could you not be a fan of Jairzinho Rozenstruik at this point?