Rozenstruik Promises “Lessons Will Be Learned”

The Pride Of Suriname Is Ready To Halt The Hype Train Named Ciryl Gane
By McKenzie Pavacich, @mpavacich_ • Feb. 26, 2021

Arguably the most pivotal test in the sport of mixed martial arts comes when a fighter is handed their first loss. When it happened to Jairinzho Rozenstruik, he knew the way he chose to respond was crucial.

“It’s always important,” the fourth-ranked heavyweight told UFC.com. “When you get a loss, the only thing you’re thinking about is getting back on the winning side, and that will get your confidence back going. As fighters, we have an ego and if you lose that, it hurts.”

Rozenstruik spent little time licking his wounds, as he was back in the gym shortly after his loss to impending heavyweight title challenger Francis Ngannou, preparing for his next fight, which would come just three months later.

But the next opponent to stand opposite of Rozenstruik in the Octagon was no less formidable, with former heavyweight champion Junior Dos Santos looking to snap his own two-fight losing streak.

The bout was a technical chess match on the feet until Rozenstruik landed a combination that knocked Dos Santos to the ground, followed by a ravenous flurry of punches that led to a stoppage before the end of the second round.

There was no big celebration or chest pounding. Instead, a few deep breaths and a lap around the Octagon before taking a seat next to Dos Santos while he was being examined post-stoppage. The two American Top Team products shared a moment of mutual respect following a fight that was equally critical for both fighters.

“There’s a moment when you’re no longer opponents,” Rozenstruik recalled of his post-victory reaction. “I respect all of my opponents, and that was a moment where I felt I had to give him my respect.”

The return to the win column helped placate the sting Rozenstruik felt in his ego, but also proved his ability to handle the pressure of redemption.

“There’s always pressure, but you have to keep your head cool and fight and do what you’re told,” Rozenstruik said. “I’m capable of knocking people out, so I went and did my job.”

Pressure isn’t a foreign concept to the Suriname native, who enters the Octagon this Saturday in his second UFC main event in a little more than a year.

While the spotlight of being in the main event doesn’t seem to faze “Bigi Boy,” it doesn’t mean he doesn’t steer clear of it. In his relatively short UFC career, he’s defeated some of the best contenders the heavyweight division has to offer, compiling a highlight reel of nothing but knockouts on the big stage.

He enters the Octagon Saturday against a fresh face in Ciryl Gane. And while the undefeated Frenchman is busy soaking up every moment of his first-ever main event, Rozenstruik isn’t going to be misled by the naivete of his opponent.

“He’s the type of fighter who can do anything,” Rozenstruik said. “I wanted to fight this one because he has a big hype, and to stop him, the hype comes to my side. That’s what we need right now.”

The two share stoppages over Dos Santos and a background in kickboxing in common, although Rozenstruik’s 85 kickboxing matches overwhelmingly overshadow Gane’s seven. But a common style is not something the contender concerns himself with.

“I never train the way fighters fight, because then I’m going to be focusing on what he’s doing, and not what I’m capable of doing,” Rozenstruik said. He added that it doesn’t matter how “Bon Gamin” wants to fight, because he’ll be able to combat any style that’s brought to the canvas. 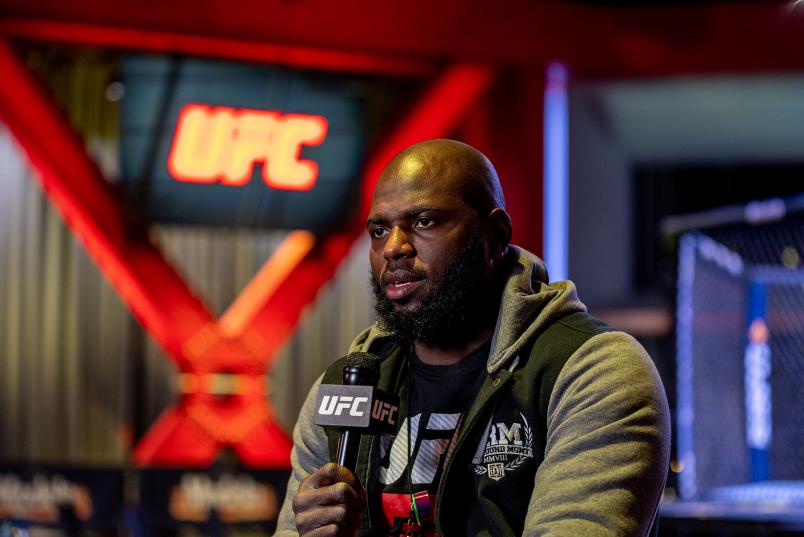 “You never know what’s gonna happen when I enter the Octagon. I always bring fighters something special every time.”

While Rozenstruik promises “lessons will be learned” in this matchup of four versus seven, he’s not looking to fight anyone ranked below him moving forward; his only focus is working toward a title shot.

He knows he’d be joining a waitlist, likely behind former light heavyweight champion Jon Jones, but that doesn’t bother Rozenstruik. While he believes Jones “has earned the right” to skip the line to challenge for a seat on the heavyweight throne, Rozenstruik knows he’ll get there eventually. And when he does, he doesn’t care who he’s facing, only that he gets his hand raised in the end.

“For me, I don’t care what’s going to happen. Who sits on the throne is what matters. Whoever has the belt -- that’s the person we’re after.”

But before he can get there, Rozenstruik knows he has to first get through the opponent that stands directly in front of him; an opponent with the exact same goal, no less.

“I see it, I respect it, but I’m a different type of fighter, and we’re going to see Saturday night.”