Jai Herbert Is Focused Only On Moving Forward

Looking To Bounce Back After His Debut Loss Last August, Jai Herbert Is Focused Only On What Lies Ahead At UFC Fight Night: Gane vs Volkov
By McKenzie Pavacich, on Twitter @mpavacich_ • Jun. 24, 2021

The last thing Jai Herbert expected of his UFC career was to be training jiu jitsu in a small, matted space on the top floor of a restaurant in England.

Forced to make the most of this training camp in any way possible, Herbert found himself outside in parks doing his strength and conditioning with kettlebells and bands, and getting in training with anyone — and anywhere — he could.

The difficulties in training over the past eleven months since we first saw Herbert enter the Octagon, however, have done nothing to hinder the determination the 33-year-old has to notch his first win under the UFC banner.

"I'm fully concentrated on getting this win. It means the world to me."

Jai Herbert (@JaiHerbert2) talks about how he has been getting ready to secure his first UFC win at #UFCVegas30 🔉⬆️ pic.twitter.com/AbpvXTArml

It’s an aspiration the “Black Country Banger” fell just short of last July when he lost his debut via third-round TKO to veteran Francisco Trinaldo on UFC Fight Island. A close fight on the scorecards with a Herbert ahead on one card and even on the other two heading into the third round, Trinaldo ended his 22nd fight in the UFC with a single, massive left hook.

Proud of his performance in the first two rounds, Herbert chose not to dwell on his thoughts surrounding the loss, but simply look for the lessons to be learned and move forward.

“You just have to look at the mistakes you made and try and work off them. Just make adjustments; that’s how you move forward. It’s not by just sitting there and wallowing in yourself, but you’ve got to pick yourself up, go again, and make the adjustments you need to make. 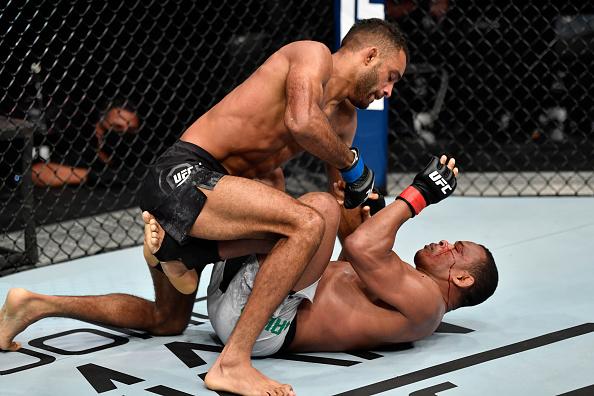 “It was a mix of emotions for me, because I was walking out just like I do in my dreams — being in the UFC,” Herbert said. “It was my debut and it was against a tough, tough guy, so it was a very weird feeling. I went in there, I performed to the best of my abilities at the time, and I feel like I put on a good performance even though what happened, happened. I’m here now though to make amends for that.”

This time, standing opposite him is Renato Moicano: fairly to the lightweight division, but not to the Octagon.

“He’s very experienced, a great fighter; he’s fought the best guys at featherweight, and he’s beat some of them too. But he has lost to some of them, and there are some things that I’ve seen that I’m going to be looking to exploit,” the Wolverhampton native explained. “He’s very dangerous on the ground, so I’ve got to be aware of that, but I’ve trained accordingly.”

Whether it’s in a high-caliber training facility or a makeshift workspace thrown together at the last minute, Herbert values his preparation the same, and is looking forward to yet another challenge that lies ahead of him.

“I think it shows that (the UFC) rates me highly, at least I hope it does since they’re always giving me these top guys,” Herbert said, chuckling. “Obviously, seeing my last performance...it wasn’t the best and what I wanted, but I think I showed that I’m up there and that I can handle these guys.” 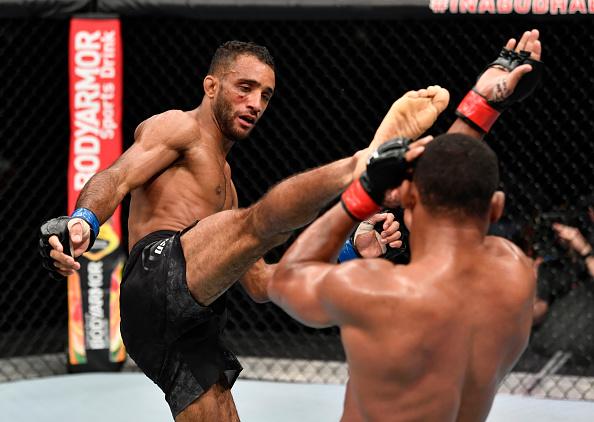 Despite a five-inch reach advantage and a bit more experience of fighting in the lightweight division, Herbert said he’s not going to overlook any aspect of this fight, especially in the areas that people believe he has the advantage in.

“I might be the bigger guy in there, I’ll have the reach advantage, but these aren’t things I’m counting on. I’m not leaning on those things; I’m not worrying about those things. My preparation is what’s giving me the confidence. And my skill, my speed, my power. I’m a fighter, that’s what gives me confidence.”

Herbert said apart from the win, he wants nothing more than to show off the skills he’s developed, and that the fight ahead will likely be determined discipline and technique.

“I feel like it may be more of a technical battle. It could come down to who keeps their shape, who keeps their discipline, and who stays focused. I’d like to say it’ll be a quick knockout, real quick with the right hand, but then I suppose you don’t get to show much of your skills. Either way, it’s time to put on a good show.”

Don't miss Jai Herbert in his sophomore showing in the Octagon this weekend at UFC Fight Night: Gane vs Volkov, live from the UFC APEX on ESPN+. Prelims begin at 1pm ET/10am PT. Main card begins at 4pm ET/1pm PT.