You Live And You Learn, That's The Mindset Of Australian Jacob Malkoun And He Believes He Will Show His True Colors At UFC Fight Night: Whittaker Vs Gastelum
By Zac Pacleb, on Twitter @ZacPacleb • Apr. 15, 2021

Despite Jacob Malkoun’s UFC debut lasting just 18 seconds, the previously undefeated Australian learned a key aspect of the fight game after landing on the wrong end of a knockout against Phil Hawes.

“Winning and losing is not everything,” he told UFC.com “Maybe the next couple of days, it’s going to affect your life, but after three, four days, everything is the same. It doesn’t really matter.”

Malkoun said the experience “probably did mature” him, but he couldn’t say for sure. Naturally, whether those lessons resonated gets fire-tested on April 17 as he makes his second walk to the Octagon at UFC Fight Night: Whittaker vs Gastelum. The exam is apt, seeing as his opponent, Abdul Razak Alhassan, has a penchant for first-round knockouts. Although Alhassan is coming off two losses, each of his 10 professional wins have come via first-round knockout.

In Malkoun’s mind, however, he’s less focused on who he is fighting and more tuned-in to how he wants to approach the bout.

"You learn, especially if it's your first loss."

Jacob Malkoun discusses what he learned after his first professional loss, how he was able to get focused for his #UFCVegas24 bout with Abdul Razak Alhassan and more 🔊⬆️ pic.twitter.com/UTbDNKM85c

“There’s not one guy who is going to excite me to fight,” Malkoun said. “I gotta get in there and fight. Everyone is a tough challenge, but I think I have the skills and the tools to get past them.”

The stumble on Fight Island wasn’t fruitless for Malkoun. He returned to training with a renewed focus to each aspect of his camp, and any time in the Octagon is time well-spent. And one could argue his second fight will be the real debut for Malkoun, a chance to show off a skillset about which he is not bashful.

“I don’t really have any weakness,” he said. “I’m just pretty good everywhere, so I’m going to keep coming for the fight. I’m not going to get tired. Just keep going.”

While that confidence could lend someone to thinking Malkoun believes he can just coast to the win, the reality is he is well aware of the job he needs to do to make good on that well-roundedness. 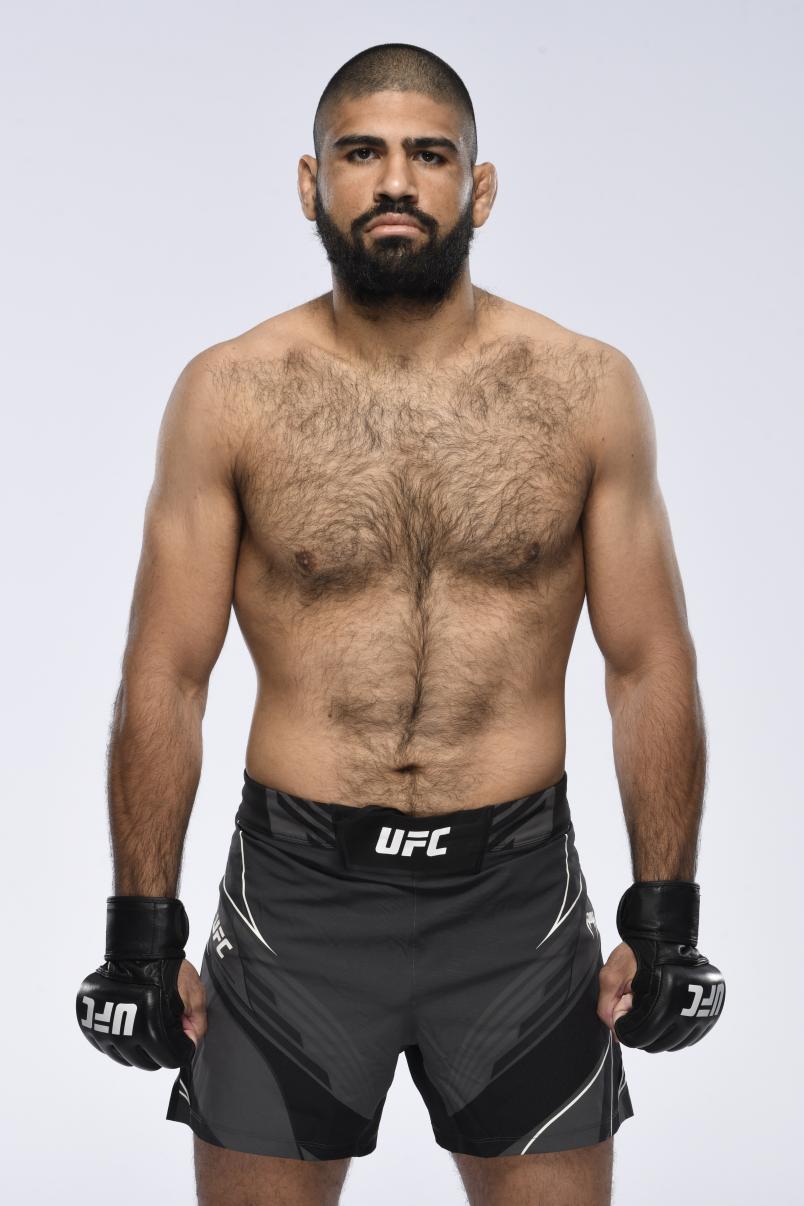 Jacob Malkoun poses for a portrait during a UFC photo session on April 14, 2021 in Las Vegas, Nevada. (Photo by Mike Roach/Zuffa LLC)

By no means is he assuming he’ll just stroll into the cage and run over Alhassan.

“I gotta do everything,” Malkoun said. “I gotta have a very good performance to win. If I come in and have an average performance, I’m not going to win. I’ve gotta come in, perform at my best and I’ll get the W.”

The extra added “umph” to training is something Malkoun felt in the aftermath of his last fight. He relied on his circle to help him bounce back and gear up for another go with a recommitted and rededicated mindset intact. All that’s left is the fight, and Malkoun reiterated a few times how much he just wants to “get it done” on fight night.

It’s the words of a man young in his UFC career – and his MMA career as a whole – keen on showing who he is as a fighter on the biggest stage, motivated and molded by an early stumble. Learning to let a loss go instead of letting the dark thoughts fester is a lesson almost every competitor learns at one point or another, and now that Malkoun has that lesson out of the way, he’s locked in on his next opportunity.

“You learn, especially if it’s your first loss,” Malkoun said. “You learn from everything. You just gotta leave it behind you, and you gotta focus on the next thing. Can’t keep worrying about the past.”