The best fighters in the world have, among other traits, confidence.

Jacob “Mamba” Malkoun, who fights AJ Dobson at UFC 271: Adesanya v Whittaker on Saturday, had his confidence tested by his UFC debut.

The Sydney, Australia native lost to Phil Hawes in October 2020 by knockout, only 18 seconds into the first round.

Malkoun admits the loss played on his mind at first, but says he put those thoughts to bed through hard work.

“It wasn’t the easiest thing to do, the way it happened,” said Malkoun of returning to the Octagon after his debut. “I just had to come back, I went straight back into training, (I kept) working hard, kept training and it all started to come together.”

After his tough debut, Malkoun was given the opposite of a “tune up” fight next. Malkoun was matched against Abdul Razak Alhassan at UFC on ESPN 30 in April 2021.  Alhassan had five knockout wins in the UFC at the time, and on paper was very capable of handing Malkoun another knockout loss. 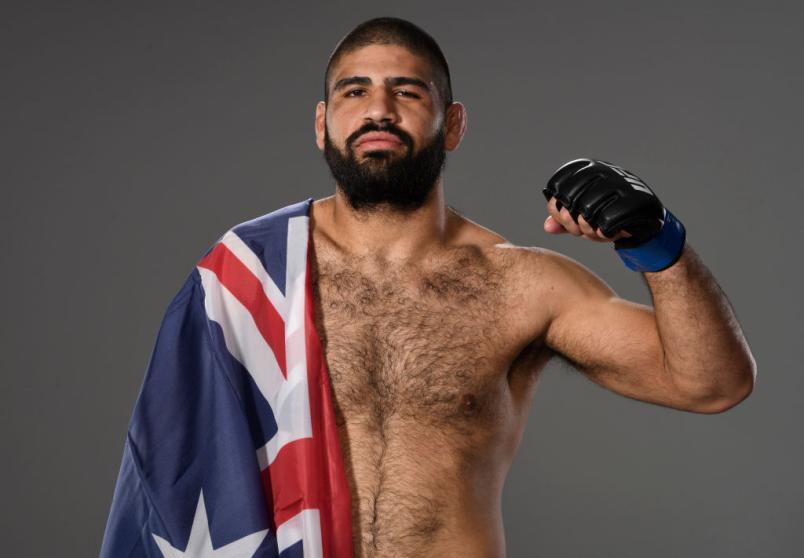 Jacob Malkoun of Australia poses for a portrait after his victory during the UFC Fight Night event at UFC APEX on April 17, 2021 in Las Vegas, Nevada. (Photo by Mike Roach/Zuffa LLC)

What followed from the 26-year-old Malkoun was a close to flawless performance as he soundly outgrappled Alhassan across three rounds, wearing down his opponent and dominating the grappling exchanges for a unanimous decision victory.

Malkoun did not give Alhassan any space to throw his strikes, and into the second and third rounds Alhassan seemed less and less likely to land a knockout blow as the grappling exchanges took an obvious toll on him physically.

“I followed the coaches’ game plan to a tee, and it worked out, I knew I had it in me,” said Malkoun. “Each fight you need a performance like that to get a win in the UFC.”

Malkoun says the fight answered the question his debut left lingering for him: Am I good enough to be in the UFC?

“It wasn’t even about the opponent, it was about proving to myself that I deserve to be there, that I’m good enough to be there.”

Malkoun’s fight on Saturday at the Toyota Center in Houston, Texas will be his seventh professional fight. 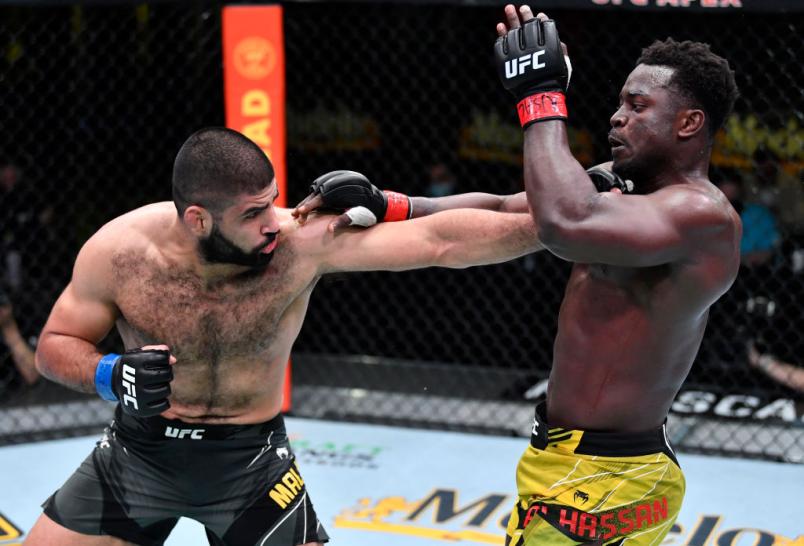 Many UFC fighters have amassed a lot of experience on the local scene before making their Octagon debut. Malkoun, however, had a  4-0 record before his UFC debut. A training partner of Robert Whittaker, “Mamba” says it was difficult getting fights on the local scene for two reasons.

“In the middleweight division, there is not (many opponents in Australia)”, said Malkoun. “It was (also) hard to find opponents with me being a training partner of Rob. But every fight I had, I performed really well.”

Some fighters have turned down the opportunity to fight in the UFC early in their career because they are not ready.

Although he may be relatively light on MMA experience, Malkoun is a credentialled grappler - a BJJ brown belt and  winner of the 2019 Abu Dhabi grappling qualifiers in Oceania (while still a purple belt) - and has a 3-0 record in professional boxing.

Malkoun, who says he was an unfit 17-year-old who took up mixed martial arts to get in shape,  says he had no hesitation in accepting the call-up to the UFC.

“I just grabbed the opportunity; it was hard to get experience, it was hard to get fights, and I learnt on the job, each fight I keep getting better.” said Malkoun. “Doesn’t matter how many fights you have before, there is no experience like fighting the best in the world.”

Malkoun will fight another heavy handed opponent on Saturday in AJ Dobson.  Malkoun’s 30-year-old opponent has a 6-0, 1 NC record and enters the UFC after a first-round rear naked choke victory over Hashem Arkagha on Dana White’s Contender Series in September 2021.

Malkoun admits Dobson will be a tough test, but of course believes he is good enough to get the job done.

“He’s going to be a tough challenge, a tough test, he’s got knockout power, he’s a powerful, explosive guy, he’s got good grappling, too,” said Malkoun. “I just think I'm good enough, better than him and ready to go.”

RELATED: The Journey Back To The Top For Robert Whittaker

Malkoun has prepared alongside stablemate Whittaker, who will headline Saturday’s card as he attempts to reclaim the middleweight title from Israel Adesanya. Malkoun says that has helped, not hindered, his preparation.

“We’re both in camp, we both have the same mindset, all the other boys are all pushing us and we’re pushing hard so everybody wants to push each other to the limit, everyone’s trying to win in training.”

Malkoun does not offer a specific prediction for victory, but believes he will get the win, however that may be.

“I think I’m gonna win, I’m the better fighter, I think I’ll get the job done wherever it needs to happen.”