Undefeated Bantamweight Prospect Jack Shore Believes He Has Earned A Shot At The Top-15
By Zac Pacleb, on Twitter @ZacPacleb • Oct. 18, 2021

It’s a testament to the depth of talent in the bantamweight division that Jack Shore is sort of flying under the radar. The Welshman aced his first three tests in the UFC with relative comfort, tallying two submissions and a hard-fought decision win. Improving to 4-0 in the promotion would certainly bring a brighter spotlight, but ahead of his fight against Liudvik Sholinian, Shore suffered a torn bicep.

Instead of pulling out of the fight, he adjusted his approach, and instead of relying on his suffocating grappling, Shore displayed smooth, compact striking and fight IQ. Shore rode those skills to a tidy unanimous decision despite breaking his thumb in the fight, as well. Now, with a 15-0 professional record, Shore believes he has shown enough thus far to warrant bigger fights in perhaps the most stacked division in the UFC.

“I’m not the loudest guy in the room,” Shore told UFC.com. “I’m not a trash-talker. I like to think of myself as a traditional martial artist. I do my talking in the cage and keep it respectful and humble outside, but there’s only so long people cannot take notice of me. 4-0 in the UFC now, I think people are starting to realize that I am a talent, and I have got the skills that can compete with those top guys.”

Shore felt “very proud” about making it through the fight and earning another victory. After giving himself a week to indulge himself with some food, Shore got back to the gym. While waiting for scans on his thumb and bicep, however, he opted to just do a little bit of running and kicking. 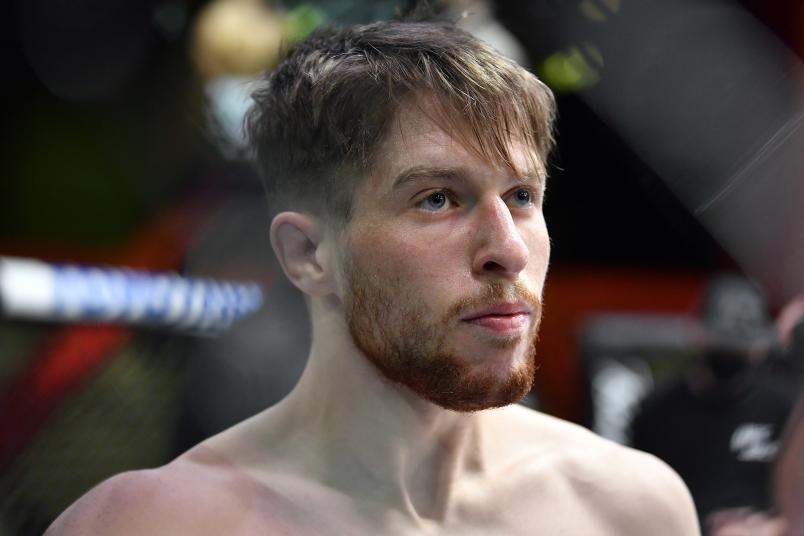 Jack Shore of Wales prepares to fight Hunter Azure in a bantamweight fight during the UFC Fight Night event at UFC APEX on April 10, 2021 in Las Vegas, Nevada. (Photo by Chris Unger/Zuffa LLC)

The business-like approach Shore poses in the Octagon carries into his preparation and overall demeanor. He is as confident and respectful as you’d expect an undefeated fighter to be, more eager to get another opportunity to show his quality as a fighter rather than bang a drum on what he has already accomplished. If – and increasingly likely, when – Shore gets his chance at a ranked opponent, he feels ready to burst onto the stage in full, and he doesn’t think that extra attention will be much of a distraction either.

“They’re going to see that I’m a problem in all areas and that my fight IQ is very, very high for someone of my age,” he said. “I’m not going to change who I am in terms of outside of the cage to try and gain publicity or attention. I am who I am. I’ve always been true to myself, and I’ll continue to do the same thing. I think people are starting to take notice now, and I just need a shot now against one of the well-known guys to get my name out there even more.”

Although Shore is still coming onto the scene in a worldwide sense, the former Cage Warriors bantamweight champion already has a solid profile in the United Kingdom. When Shore made his sophomore appearance on Fight Island – a submission win over Aaron Phillips – UFC Hall of Fame member and former middleweight champion Michael Bisping compared Shore to former two-division champ and fellow Hall of Famer Georges St-Pierre on the broadcast. He doubled down on that thought at UFC Fight Night: Brunson vs Till.

Although comparisons to one of the greatest to ever do it are a little early, it’s not out of pocket either. Shore’s combination of strong grappling and clean striking do show shades of “Rush.” Of course, those are lofty heights and expectations to bring onto the 26-year-old’s shoulders, and it’s a comparison Shore feels is “really overwhelming.”

“I look at (St-Pierre) as the all-time best,” Shore said. “To be compared to him after four fights in the UFC is a little bit crazy, but as long as people keep making them comparisons, and I keep performing well, then who knows? If I can achieve a third or half of what GSP achieved, then I’ll retire a happy man, so it’s great to hear those comparisons being made, to be honest.”

Where Shore could perhaps most quickly become GSP-like is in the way he leads the mixed martial arts scene for his home country. St-Pierre’s success did wonders for the sport’s scene in Canada, and Shore believes he can take the torch for Wales and continue to advance the sport’s stature there.

He and his father, Richard Shore, opened Shore Mixed Martial Arts Centre of Excellence in Aberbeeg in November 2019, and they hope to cultivate the next generation of Welsh mixed martial artists.

“We’re not quite on the level of America in terms of it being a mainstream sport, but people are taking notice,” Jack Shore said. “There’s more and more kids getting involved in the sport, and I think I’m leading the charge at the minute for Welsh MMA. There were guys like Brett Johns and Jack Marshman who came before me, and they laid the path for me to follow. Hopefully I can be the one that takes it to that next level. Maybe eventually bringing a UFC to Wales would be nice, wouldn’t it?” 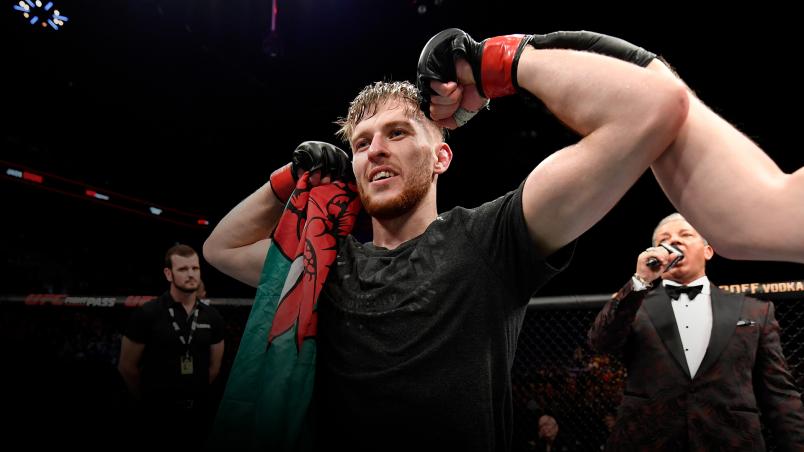 Jack Shore of Wales celebrates his submission victory over Nohelin Hernandez in their bantamweight bout during the UFC Fight Night event at Royal Arena on September 28, 2019 in Copenhagen, Denmark. (Photo by Jeff Bottari/Zuffa LLC)

Before any of that can happen, though, Shore has to keep winning, and that’s more than OK with him. While he waits for his body to heal up a bit, he said he is excited to get into the gym and work more on technique-refinement and skill development.

Dana White Has a Plan for UFC World Domination

He has an appetite for a ranked matchup, though. After his September 4 victory, he floated the idea of fighting Song Yadong, Rafael Assuncao or Cody Stamann, and although none of those have come to fruition just yet, it’s clear he’s ready to make that next step in his career. Essentially, it won’t be long now before Shore gets that breakthrough chance, and until then, he’ll continue to just keep putting in the work.

“My name is obviously starting to get out there now,” Shore said. “I think that if we had the show in London this year and in March 2020, a lot more people would know about me because of my following in the UK and how many fans I bring to the table on those live shows. It’s just been unfortunate that three of my four fights in the UFC have been behind closed doors with limited numbers in the area. But people are starting to hear about me now.”