Jack Shore Is Eager To Earn His Recognition

UFC Bantamweight Standout Jack Shore Has Already Made A Name For Himself Inside The Octagon, And Is Awaiting His Chance To Propel Himself Into The Spotlight In 2021
By E. Spencer Kyte, on Twitter @SPENCERKYTE • Apr. 6, 2021

Over the last couple years, the bantamweight division has become one of the deepest, most competitive weight classes in the UFC, featuring an intoxicating mix of proven contenders, elite prospects, and dangerous, tenured veterans.

This weekend in Las Vegas, unbeaten Welsh standout Jack Shore makes his first start of 2021, eager to establish himself as one of the top talents to watch in the 135-pound weight class.

“I hit the ground running with my debut — I had a good performance, had a lot of high praise — but then last year was a little bit of a slow year between the London show getting cancelled and my fight at the end of the year falling through,” said Shore, who carries a perfect 13-0 record, including a 2-0 mark inside the Octagon, into his preliminary card clash with Hunter Azure on Saturday night at the UFC APEX. 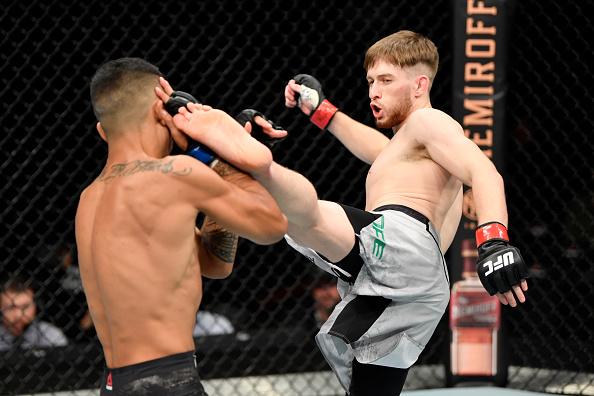 Jack Shore of Wales kicks Nohelin Hernandez in their bantamweight bout during the UFC Fight Night event at Royal Arena on September 28, 2019 in Copenhagen, Denmark. (Photo by Jeff Bottari/Zuffa LLC)

“But I don’t want nothing given to me. Every bit of praise, I want to make sure I’ve earned it, and if I’ve got to do that the hard way by smashing out three wins in good fashion this year, then that’s what I’ve got to do. If they’re not talking about me now, I guarantee that by the time this year is over, they definitely will be.”

Heading into his third UFC appearance, Shore has all the markings of a championship-caliber talent.

The Tillery Combat MMA Academy representative posted a 12-0 mark as an amateur, closing out his run with four victories in three days to claim the 2015 IMMAF European Open Championship, before eventually winning gold under the Cage Warriors banner, establishing himself as one of the best 135-pound talents in Europe and joining an impressive collection of athletes to parlay a Cage Warriors title into a chance to compete inside the Octagon.

He’s since secured finishes in each of his first two trips into the Octagon, submitting Nohelin Hernandez in the third round of his debut in Denmark, and following it up with a second-round submission win over Aaron Phillips last summer on Fight Island.

That performance had the potential to catapult him into wider consciousness, but instead it turned out to be the first in a series of breakout efforts that took place on that balmy night in Abu Dhabi.

Immediately after Shore’s victory, Liana Jojua submitted Diana Belbita, announcing her presence as a flyweight prospect. Two fights later, fellow former Cage Warriors titleholder Modestas Bukauskas collected a walk-off finish at the close of the first round, which was followed by another early finish by Lerone Murphy before the main card delivered impressive efforts from Mounir Lazzez and Taila Santos.

That was also the night the that the legend of Khamzat Chimaev was born, as “Borz” bulldozed John Phillips and asked for another chance to compete before the UFC departed Fight Island, kicking off his breakout campaign.

Some nights you’re the only one to get a finish and attention flows in your direction. Other times, the rest of the evening is filled with impressive efforts and the conversations about who stood out don’t make it all the way to the start of the night.

“It doesn’t bother me,” he said. “For a long time when I was outside the UFC, I was the big fish in the little pond — everyone in Europe knew who I was, I was selling out arenas in Wales, I was a guy that everyone looked up to as the face of the Welsh scene. Now I just view myself as the little fish in the big pond and I’ve got to earn my stripes.”

Which is why he was so excited about this weekend’s matchup. 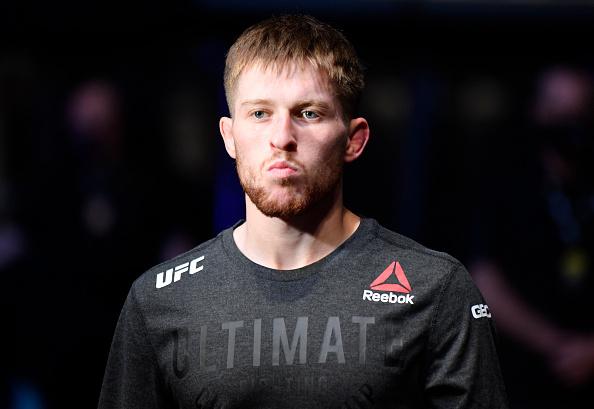 Azure impressed in his Contender Series triumph over Chris Ocon, then made an instant impact in his promotional debut, out-hustling recent TUF winner Brad Katona to push his record to 8-0. He stumbled in a short-notice featherweight engagement with Brian Kelleher when the action in the Octagon restarted last spring, but rebounded by grinding out another gritty Canadian, Cole Smith, in September to get back into the win column.

A quality wrestler that trains with the Fight Ready camp in Phoenix, Arizona, the 29-year-old Azure is someone many were high on when he arrived on the big stage, and Shore is angling to show his levels by turning him back and taking his spot in line in the bantamweight division.

“It was the type of fight we wanted; we wanted that step up in class,” admitted the unbeaten Welshman. “I know Hunter has got a very good wrestling background, a good record. I know he suffered a loss to Brian Kelleher, but he’s gone on to go on okay. He’s solid everywhere and it was the step me and the team wanted.

“We want those tougher guys, we want to be moving in the direction of fights that are going to start pushing us up the ladder, rather than fighting guys that are unknown. I think after this fight, if I put on a good performance against a guy like Hunter who is known out there and they’ve seen a lot of — if I can come over and put on a good show, it will open some eyes.”

Stylistically, the matchup is an intriguing one, pitting Azure’s wrestling against Shore’s methodical grappling, which was part of what made the pairing appealing to the UK standout.

“On paper, he’s got a style that could cause me problems, so it’s exciting for me to be able to go out there and show my all-around game,” began Shore. “People are going to say, ‘He’s a wrestler,’ so am I going to take him down? Am I going to grapple with a guy that has those kinds of credentials? But I can do it all.

“If I’ve got to keep it on the feet and beat him on the feet for three rounds, I can do that, but don’t underestimate the Welsh wrestling,” he added with a laugh. “We can wrestle over here, too! Don’t be surprised to see me nick a takedown or two as well.”

No matter where the action takes place, Shore is beyond confident that he will emerge with his hand raised once more, continuing his string of walking into the cage unbeaten and walking out the same way.

And he’s sure the fans will like what they see. 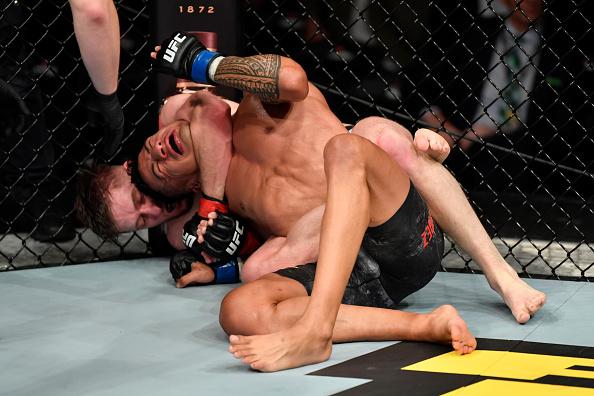 Jack Shore of Wales submits Nohelin Hernandez in their bantamweight bout during the UFC Fight Night event at Royal Arena on September 28, 2019 in Copenhagen, Denmark. (Photo by Jeff Bottari/Zuffa LLC)

“They can expect me to come out there, put on a good show, and to look good doing it,” he said without a hint of hesitation. “I’m not one of these guys that wants to be involved in these wars and these punch-for-punch tear-ups — I want to go out there and win smooth and dominant and show that wherever the fight goes, I can dominate in that area.

“As good as Hunter is, and I’ve got all the respect in the world for him, I just feel like I’m better than him in every area and my Fight IQ is going to keep me a little bit in front.

“I always look for that finish; I’m not coming to take him to a decision,” he added. “I’ve had 12 out of 13, so I’m looking to make it 13 out of 14. He’s a tough guy, so if I’ve got to take him three rounds, it wouldn’t be a shock, but obviously I’m coming for that finish and to entertain the fans that are watching.”