Jack May: An Outlaw's Tale

"I want to win and I want to show the world that I belong in the UFC and with these top heavyweights." - Jack May 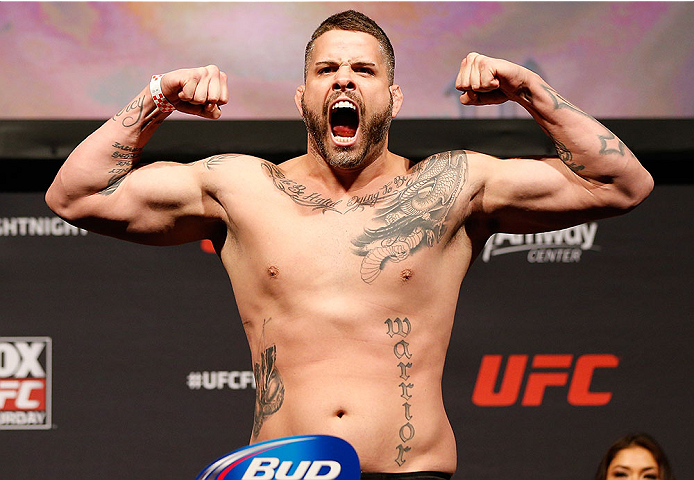 Jack May has the fever again. It may be a mild one, but in recent weeks he’s thought about lacing up his sneakers again and hitting the hardwood where he lived his first athletic life.

Then the former college and pro basketball player has to catch himself, because that second athletic life – as a mixed martial artist and UFC prospect – is what takes precedence these days, and all it takes is one turned ankle and he’s on the shelf.

That’s not an option for “The Outlaw,” who has been eagerly anticipating his return to the Octagon as soon as his first fight against Derrick Lewis ended in April thanks to a mixture of Lewis’ fists and a knee injury.

“The knee was fine once I got back in the gym, no surgery,” he said. “I don’t got time for that. I said I want to fight again. Get me a fight. I need to get this taste out of my mouth. Lewis was a tough fight. I felt comfortable in there, but it was just one of those things where I got this taste of losing in MMA, and I hate it. I want to win and I want to show the world that I belong in the UFC and with these top heavyweights.”

This weekend he gets his chance when he faces veteran Shawn Jordan in Bangor, Maine. It’s the first fight since the first loss of May’s pro MMA career, but the 6-foot-8 Santa Clara native isn’t one to dwell on the negatives; he’s a forward thinker all the way, something evident when he first decided that he was going to fight for a living.

Of course, that’s fine if that’s the path you choose, but most who get into this business do so with some wrestling, boxing, or jiu-jitsu on their resume. May had stints at four colleges and overseas as a basketball player, not exactly the recipe for MMA success. Then again, May wasn’t one who was deterred easily either, especially since he was always a scrapper, even on the court.

“I was in the Dean’s office all the time,” May, who played for Duquesne, the College of Southern Idaho, University of Idaho, and North Dakota State, said. “I was getting reprimanded every month. The coaches probably loved me and hated me because I was the guy on the court that didn’t take no s**t and was real aggressive. I was always a captain. But my sophomore year I was at the very top of leading the country in technical fouls. That’s how hot-headed I was. If you had a problem with me or had something to say to me and wanted to step outside, you found a dude that was game for it.”

After college and a run overseas, May’s basketball career was finished, but it was a decision he was more than at peace with.

“When I was done playing ball, I was done,” he said. “I hated watching it and I couldn’t stand it anymore. After that I kind of just lived the life. I lived down in Newport Beach, California, I did some security in the big nightclubs down there and made really good money. I also did some personal security because of my size.”

And then he fell in love. With mixed martial arts.

“I was one of those guys who was like, I can probably do this,” he laughs. “And I went to the gym and found out that it was a lot more than just throwing some blows and getting into a fight. But once I got hooked on it, which was the first day, I just kept going back and I put my mind to it and told myself I was going to get there. And it happened.”

Not without some growing pains in the CSW gym led by Erik Paulson. One of the sport’s premier coaches and strategists, Paulson is also as old school as they come, so he’s going to find out if someone is serious as soon as they step through the doors. May’s initiation? Former UFC heavyweight champion Josh Barnett.

“It’s a tough gym,” May said. “When I first walked in there and trained, I had no experience. And I got thrown in with him (Barnett) the first day. It was one of those things where you either man up and catch on and get it done, or he was going to chew you up and spit you out.

“But I wasn’t going to let anybody run me out of that gym,” he continues. “I went from watching these guys on TV to sparring with them with a five dollar boil and bite mouthpiece with some hand me down Everlast gloves. (Laughs) I know I had the toughness inside of me; it was just getting the skills and putting it all together. And Paulson will get that out of you and he’ll show you everything. He is a tough, old school type of guy, and he’s an encyclopedia. He’ll pave the way; it’s just whether or not you can walk the walk.”

Seven fights later, May was 7-0 with six knockouts, and when you’re a 6-foot-8 heavyweight who knocks people out, you become popular pretty quickly. But May only had one place in mind.

“My goal initially was to get to the UFC,” he said. “And I turned down contracts from World Series of Fighting, we turned down multiple contracts from Bellator, and I stuck to that goal. I knew I was going to get there. I knew that being 6-foot-8 and versatile and strong, and knowing what I had to offer, there weren’t that many guys that had that complete package, as I like to say, so I knew that at some point in time, I had to get there. My number was going to get called sooner or later.”

It got called earlier this year, and though the result wasn’t what he was looking for, he’s got a second crack at it against Jordan, a former LSU football player, this weekend. So is this one for the basketball players on Saturday?

“I’ve heard nothing but good things about Shawn Jordan and I’ve got nothing but respect for him,” May said. “He paid his dues, he’s got a good record in the UFC and he’s fought a lot of tough guys, but I feel like this is my time, and this fight will show everybody that I belong. So if it’s going to be one for the basketball players, yeah, because I never liked the football players in college. I was always beefing with those clowns. (Laughs) Not taking anything away from Shawn Jordan, but I know I’ve got to take care of business, and if I do that, then things will go in my favor.”