"I am here on a mission and my mission is to be the UFC middleweight champion." - Ronaldo "Jacare" Souza 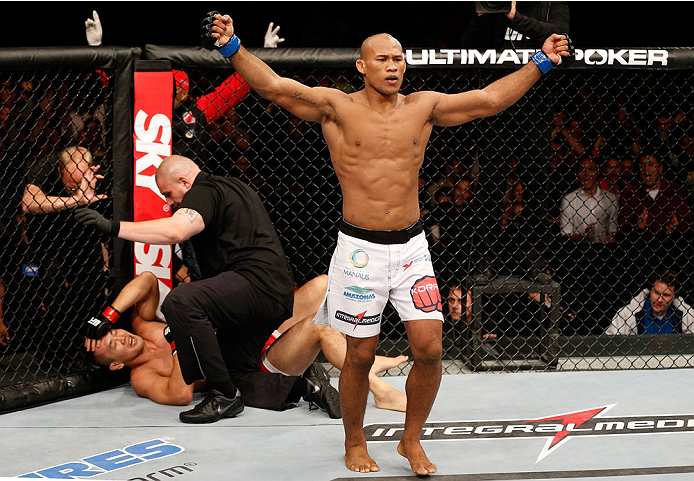 In the five fights since his last loss against Luke Rockhold in 2011, middleweight contender Ronaldo “Jacare” Souza has made it a point to not leave matters up to the judges, ending three bouts by submission and two by knockout. So as the jiu-jitsu wizard adds knockout artist to his resume, what does he enjoy more, a knockout or a submission?

“I prefer to win; it can be by knockout or submission,” said Souza through manager / translator Gilberto Faria. “My goal is always to win as fast as I can, so whatever opportunity comes first, I will go for it and I will try to capitalize.”

That approach has not only made the 34-year-old Souza a quick favorite with UFC fans, but with his submission of Chris Camozzi and knockout of Yushin Okami, he has also become a top five contender at 185 pounds heading into his Saturday UFC Fight Night bout against Francis Carmont. Pressure? Not for Jacare.

“No way,” he said, “I love challenges, and my life is all about challenges. When I heard that (I was one of the fighters in line for a title shot), I got even more motivated to train harder and be ready for when this opportunity comes to life.”

A big win on Saturday will go a long way in determining how soon that opportunity presents itself, and there’s no better time to make a statement than on the same card where fellow contenders Lyoto Machida and Gegard Mousasi headline. In a recent chat with Mousasi, the Netherlands product declared that either he or Souza should get the next crack at the belt should they both win this weekend in Jaragua do Sul. Does Souza, who lost to Mousasi in 2008, feel the same way, or does he think a rematch between the two will produce a true number one contender?

“I like Mousasi, he is a very nice guy, but I have no problem fighting him or anybody else; it is up to the UFC to decide who I will fight next,” he said. “I believe I am one of the few guys that are close to having a shot at the title, but I am not making any plans on who to fight next. It is one fight at the time, and I just make sure I am well prepared for my next fight.”

That next fight is not an easy one, as Carmont enters their bout with an 11 fight winning streak that dates back to 2008. That’s a long time to be that good, and with such success comes even more confidence. Souza knows what he’s in for though.

“He is one of the toughest guys in the division, with a very complicated game for anyone,” said Souza of Carmont. “He also has momentum coming from 11 straight victories, and six of these victories are in the UFC. So yeah, this is not going to be a walk in the park. I am aware of it and I am very prepared for this bout.”

And while the champion of the middleweight division is the United States’ Chris Weidman and Mousasi hails from the Netherlands, it’s clear that if you’re a Brazilian middleweight, these are good times, with Souza, Vitor Belfort, Machida, and some guy named Anderson Silva all ranked in the top five. A long time ago, that might have been an issue if you were one of those folks who didn’t want to fight a countryman, but these days, business is business.

“I sincerely believe that you have to fight however is ranked around you,” said Souza, who has not met a Brazilian in a fight since 2007. “So it’s not that person’s country I am fighting, but the person’s position in the rankings that I am fighting for. So if I have to fight a Brazilian person to get in a better position in the rankings, or to keep my position or to be the champion, just tell me where to sign.”

So if Belfort emerges victorious from his May title fight against Chris Weidman, fighting him would be no problem for Jacare. How does he see the upcoming bout playing out?

“This fight is unpredictable and both guys can win,” said Souza. “But whoever is the champion and if the UFC gives me the opportunity to fight for the belt, I will be ready to put on a fight and I will do my best to win.”

Some would say that’s an on the fence answer about Weidman-Belfort, but it’s not really, simply because Souza really doesn’t care who he eventually fights for the title, as long as he gets that shot.

“It took me a longer time to get into the UFC, but when I finally got here, I was ready for it,” he said. “I’ve got the experience, I am in my prime, and I have a great camp, so I am not here just to show up to fight; I am here on a mission and my mission is to be the UFC middleweight champion.  It's my time.”