"I feel that I am still evolving in my game, getting stronger, getting faster, and definitely adding more weapons to my armory." - Ronaldo "Jacare" Souza 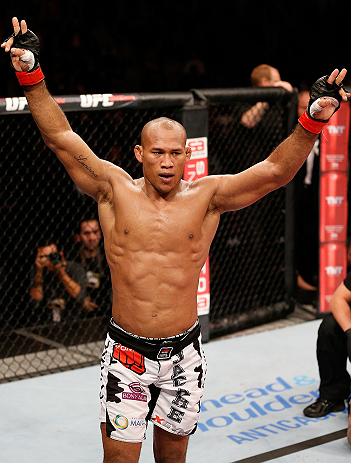 We’ve seen it all before. A fighter comes into the UFC with a reputation as an elite submission artist or a striking savant, and when the bell rings, you just don’t get what you expected. Yet when Brazilian Jiu-Jitsu wizard Ronaldo “Jacare” Souza entered the Octagon for the first time in May against ultra-tough Chris Camozzi, he not only submitted his foe, but he did it in the first round with an arm triangle choke that was frightening in terms of the speed he took to finish.

Oh yeah, “Jacare” came to the big show as advertised. So how does he explain his ability to finish off Camozzi? Was it strength, positioning, or technique?

“All three,” he said through manager / translator Gilberto Faria. “It was funny, I was back at XGym and my training partner was like ‘he tapped too fast.’ So I said lay down, let me show you how I did it, and every one of them tapped at the same time or faster than Camozzi. This is one of my strongest submissions; once it’s locked right it goes really fast.”

It’s hard to think of Souza having a better introduction to UFC fans, and the fact that he was able to do it in his home country of Brazil after fighting in the United States and Japan over the previous five years made it that much better, even if there were a few butterflies in his stomach on fight night.

“I was a little nervous at first, and I had some past images going through my mind, but the energy of the crowd was so intense that it energized me even more,” he said. “I was walking to the cage, I saw the lights, I heard the crowd, and once I heard Bruce Buffer saying my name, I was sure that it was really happening; I was fighting in the UFC. It was awesome, especially the fans’ support during and after the fight.”

To some, Souza may have been the “new guy” on May 18, but the Rio de Janeiro product is no rookie. A former Strikeforce champion, the 33-year-old has been good for a lot of years now, but it seems like he revved into another gear after losing his belt to Luke Rockhold in September of 2011.

“First, I learned that I cannot rely on the judges’ decision,” he said. “Sometimes they are watching something else instead the fight. But the most I learned from that fight against Luke was to not waste my energy when not necessary and to be more strategic.”

Since the Rockhold fight, Souza is 4-0 with four finishes, three by submission. He’s looked so good that it wasn’t a surprise when he was paired with perennial Japanese contender Yushin Okami on this Wednesday’s UFC Fight Night card in Belo Horizonte.

“He is a complete fighter, but I will say he is especially good at controlling the fight, his right jab is dangerous and he clinches very well,” said Jacare of Okami. “I am a big MMA fan, so I am always watching everyone and he is a top-ranked middleweight fighter. He already fought for the belt, so everything points to him being the most highly-ranked fighter I ever fought. I am very excited for this bout and it is going to be a war.”

With Okami’s reputation (as well as a three fight winning streak) preceding him, you’ve got to think that if Souza survives and wins the war, he will be on the short list of title contenders. And while being on such a list is interesting enough, it pales in comparison to the interest being generated by the two men vying for the 185-pound belt this December, champion Chris Weidman and challenger Anderson Silva. Their rematch will have the entire division (and the MMA world) watching after Weidman shocked the future Hall of Famer via second round knockout in July.

“Weidman put his wrestling and jiu-jitsu to work in the first round and in the second round he came in very focused,” said Souza of the fight. “The middleweight division is kind of open now, and there are a lot of new matches to be made and new opportunities, so it did shake up the division pretty well.”

And if Weidman remains champion, that’s probably the best case scenario for the challengers underneath him to get a shot at the belt, given the probability that a Silva win would likely prompt a rubber match or fights against more marquee names. So when asked if he would prefer to face Weidman or Silva for the belt, there is no hesitation in Jacare’s response.

“Definitely Weidman,” he said. “Anderson and I train at the same gym, and we trained together before, so with Weidman it is a no brainer choice. I would fight Weidman anytime; I just need to get the call from the UFC, and it is on.”

Yeah, Jacare Souza isn’t your typical fighter entering his second bout in the UFC. He is a legitimate threat to anyone at 185 pounds, and the scary part is that he says we haven’t seen anything yet.

“I feel that I am still evolving in my game, getting stronger, getting faster, and definitely adding more weapons to my armory. I hope I will be able to show that in this upcoming fight.”