"It's a very tough division. They are all tough guys and any of them can
put a great fight. But I see myself reaching the top of my division,
step by step." - "Jacare" Souza 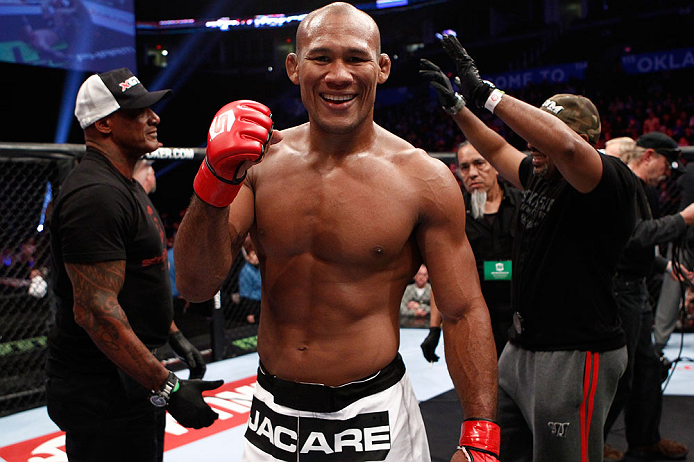 20 years after he emerged on the scene, shocking the world with the then-mysterious art of jiu-jitsu, Royce Gracie’s influence remains strong in mixed martial arts. Just ask Ronaldo “Jacare” Souza, the man who may just be, like Gracie was in his day, the premier grappler in the sport.

“I was in Manaus, I just started in jiu-jitsu and I was stoked that I was learning the same martial art that Royce Gracie was using to win his fights in the UFC,” said Souza, through manager Gilberto Faria, of his first exposure to the UFC. “At that time it was incredible for me that a guy that size was winning against bigger guys. That kept me motivated to train even more.”

Gracie’s success prompted countless people to put on gis and hit the mats while young men like Souza, who started training at 17, just hit them harder. Fighting wasn’t on the menu yet, but as he began to dominate the jiu-jitsu circuit, the then-brown belt decided that he was going to add punching and kicking to the mix.

Souza debuted in September of 2003 with a loss to Jorge Patino, but he wouldn’t experience the bitter taste of defeat again for five years, eventually going on to win a Strikeforce middleweight title, beating the likes of Mayhem Miller, Matt Lindland, Joey Villasenor, Tim Kennedy, and Robbie Lawler. Today, Souza stands as one of the best 185-pounders in the world and his UFC debut this weekend against Chris Camozzi is one of the most highly-anticipated in years.

It’s a long way from his last fight in Brazil back in October of 2007, when he forced Wendell Santos to tap out due to strikes.

“It’s a huge change,” said Souza. “At that time I was only fighting in events in Brazil and I had a limited infrastructure for training. Now I am definitely a professional MMA fighter. I’m surounded by the best professionals of the sport in an amazing infrastructure where I can be 100% dedicated to my training and family. I feel that now I am ready for higher stakes.”

They don’t get any higher than being in the UFC, and that reality has done in more than a few rookies and imports over the years. Having your opponent change on short notice doesn’t help either, with Camozzi stepping in for the injured Costa Philippou to face Souza.

“For sure it is a little difficult to prepare for someone and then fight a different guy,” he said. “I was training for a 5-10 body frame person and now I am fighting someone with a 6-3 frame with more reach and it’s two weeks away, when my training is pretty much done. But it doesn’t change a lot; we have so many training partners at XGym, so I am used to training with all kind of bodies and shapes and I will always be ready to fight anyone.”

And as far as doing all this in his home country, that’s no problem either.

“It means a lot to me,” said Souza of fighting at home. “Not only I will debut in the biggest event of the world, I will debut in Brazil. That pumps me up to be ready, to be more focused, and to put my emotions on the side and bring the action into the cage.”

Since 2009, Souza’s only defeat came via five round unanimous decision to Saturday’s headliner Luke Rockhold, and since then, he’s elevated his game even higher, submitting Bristol Marunde and knocking out Derek Brunson before finishing his Strikeforce career with a first round submission win over the UFC’s Ed Herman in January.

Yet what may be most impressive about his recent run is that his striking game is starting to catch up to his feared ground attack.

“Yes, I am feeling very comfortable with my striking game, but jiu-jitsu is what I have done all my life, so I always going to be more comfortable on the ground.”

The win over Herman was a shot sent across the bow that “Jacare” was coming though, even if he’s not rushing to get his crack at Anderson Silva.

“I still need a couple more fights to move up,” he said. “It's a very tough division. They are all tough guys and any of them can put a great fight. But I see myself reaching the top of my division, step by step. I am aware of the responsibilities and challenges ahead of me and I am ready for it.”

The fans should get ready too.

“My fans can expect a very focused and well-prepared Jacare,” he said. “I will show that I deserve to be in the UFC and be among the top-ranked of my division.”