Jacare Souza Has A Lot Left In The Tank

Jacare Souza has spent a lot of time in the Octagon and he believes he still has a lot more to give.
By E. Spencer Kyte, on Twitter @SpencerKyte • May. 4, 2020

Everything before the age of 25 is a reason to celebrate, whether you’re turning 16 and getting your license, becoming an adult at 18, or a full-fledged adult (at least on paper) three years later when you turn 21. But the first one that will get your thinking about your place in the universe and everything you’ve done up to that point is 40.

Perennial middleweight contender Ronaldo “Jacare” Souza reached that milestone back in December, and while there is plenty for him to reflect on over the course of his 15-plus year career in the cage, the decorated Brazilian jiu-jitsu practitioner would still much rather focus on what’s in front of him instead.

“I am extremely proud of everything I’ve accomplished in my professional career,” said Souza, who returns to the 185-pound ranks this weekend following a one-fight venture to light heavyweight when he takes on Uriah Hall in Saturday’s first televised preliminary card fight on ESPN. “God gave me incredible genetics and I will be able to fight for a long time; you’ll see.

“I have nothing to mention about retirement,” he added, addressing the question that hovers around any fighter of his vintage. “I don’t think about it. I will fight for a long time yet. I will beat a lot of fighters.”

That sunny, positive outlook is a far cry from the demeanor carried going into his last middleweight appearance just over one year ago. 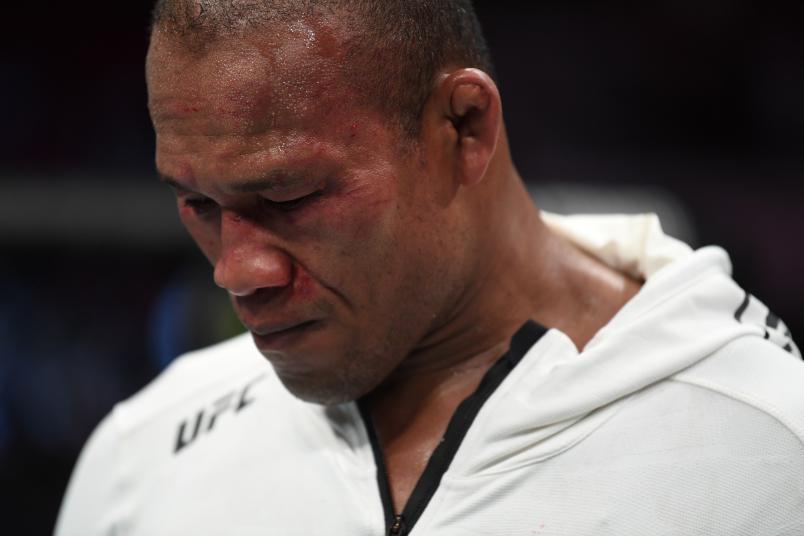 SUNRISE, FL - APRIL 27: Jacare Souza of Brazil reacts after his loss to Jack Hermansson of Sweden in their middleweight bout during the UFC Fight Night event at BB&T Center on April 27, 2019 in Sunrise, Florida. (Photo by Jeff Bottari/Zuffa LLC/Zuffa LLC via Getty Images)

SUNRISE, FL - APRIL 27: Jacare Souza of Brazil reacts after his loss to Jack Hermansson of Sweden in their middleweight bout during the UFC Fight Night event at BB&T Center on April 27, 2019 in Sunrise, Florida. (Photo by Jeff Bottari/Zuffa LLC/Zuffa LLC

Originally scheduled to face Yoel Romero in a rematch of their hotly contested, heavily debated clash from UFC 194, the Cuban Olympian withdrew from the bout due to an illness early in the month and was replaced by Jack Hermansson. Though the Swedish upstart entered on the best run of his career, having earned three straight stoppage victories, Souza struggled to find the motivation necessary to go toe-to-toe with “The Joker” and it showed once the two men stepped into the cage.

For most of the 25-minute affair, the Brazilian veteran looked listless. Save for one round where he seemed to find an energy reserve as Hermansson momentarily stalled out, the bout was a one-sided affair with the emerging contender securing the biggest victory of his career, leaving many to wonder what the future may hold for Souza.

The answer would come a handful of months later when it was announced that “Jacare” would venture up to light heavyweight for a main event showdown with surging Polish contender Jan Blachowicz, who was coming off a second-round knockout win over Luke Rockhold earlier in the summer.

In the preamble to the bout with Blachowicz in Sao Paulo, Souza pulled back the curtain ever so slightly on the challenges he was facing heading into his matchup with Hermansson. He spoke about feeling burnt out and questioning whether he wanted to continue fighting, only returning to the gym initially to help his long-time friend and teammate Rodolfo Vieira prepare for his UFC debut.

The Brazilian acknowledged working with a psychologist, but never went as far as to divulge what had been troubling him, only saying that it had been addressed and everything was once again moving in the right direction.

“I was burnt out and it affected me psychologically,” said Souza, who again stated he didn’t want to go into details. “I decided to change some things in my life as an athlete and today I’m super-well.

“I had some problems, but those were resolved in my last fight at light heavyweight,” continued the veteran grappler, who dropped a split decision to Blachowicz in November. “I had the support of my family, health professionals and my coaches. It has passed and doesn’t exist in my life today.

“I’m very motivated and ready to win. ‘Jacare’ has returned.”

Espousing renewed passion and fire, the next step in the 40-year-old’s journey to prove he’s still one of the top fighters in the sport comes this weekend when he steps into the Octagon against Hall.

Like Souza, the former Ultimate Fighter finalist has spoken openly about his challenges with the mental side of the sport in the past but appears to have put his previous inconsistency behind him. Now training with the crew at Fortis MMA in Dallas, Hall enters this weekend’s return to action on a two-fight winning streak, marking the first time he’s earned back-to-back triumphs since 2015.

“I accepted the fight at light heavyweight because he (Blachowicz) was a tough opponent and very well positioned in the rankings,” Souza said of his November sojourn to the 205-pound weight division. “I would do other light heavyweight fights, for sure, but middleweight is my weight class.”

A staple in the division since arriving from Strikeforce in the spring of 2013, the veteran standout has maintained a permanent residence in the Top 15 for the majority of that time, only recently being shuffled out of the rankings as a result of his one-off appearance up a division.

He’s been on the fringes of title contention for a number of years, never quite securing the right win at the right time to secure himself a title shot, but with the challenges that plagued him last April behind him and his passion rekindled, a run at reigning champ Israel Adesanya certainly cannot be ruled out, although there are a couple other fights that feature more prominently on Souza’s list of potential future matchups.

“Everything that happens from this point forward will be a plus for me,” he began, “but I would love a rematch with Romero and Kelvin (Gastelum) in order to prove to everyone that I am ‘The Rematch King.’”

Though he has a tough task ahead of him this weekend, having his sights set on settling the score with two of the division’s elite are the type of goals you only set for yourself if you’re planning on sticking around for the long haul.

A year after questioning whether he wanted to continue fighting, “Jacare” is indeed back.