Jacare Souza and The Art of Adapting 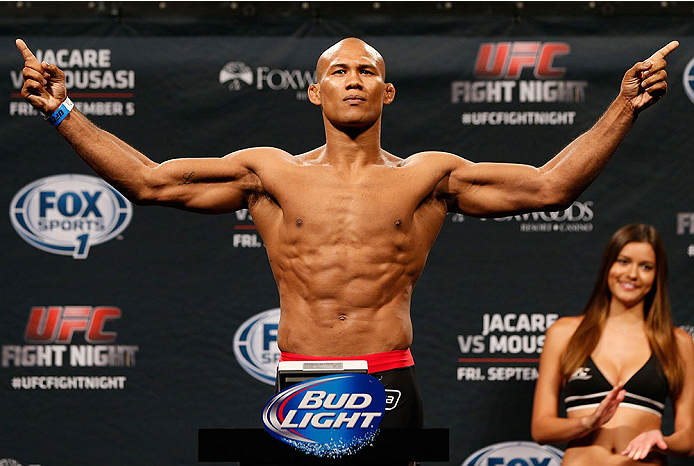 Crocodiles wish they were this dangerous.

Arguably, the greatest predator in today’s UFC middleweight division is Ronaldo “Jacare” Souza. The former Strikeforce middleweight champion made a declarative statement to that point in his most recent Octagon outing, as he secured a third round submission stoppage of Gegard Mousasi in a very one-sided scrap. The win was dominant, earned a Performance of the Night bonus and grabbed the famed Brazilian grappler some revenge for a loss six years prior.

“I was pretty sure I would do a great performance,” Souza said. “I had a great camp, and my body and mind were ready. That was the reason I was so happy to have a chance to fight him again. I was able to use everything I trained for. I was able to keep the fight standing as I wished. I got hit a couple times and I did not feel much of it, so I was feeling comfortable to stand and trade and wait for the right moment to bring the fight to the ground. My performance was perfect, my strategy was on point and I was able to show a little bit of everything that I had for this fight. The most impressive part was when I was able to stand with him - I was exchanging and connecting my punches.”

At 35 years old, Jacare looks more unstoppable now than he ever has in his illustrious 21-3, 1NC pro MMA career. As Souza mentioned, it’s his technical ability, power and, most of all, confidence in his striking that has turned him into a new breed of scary inside the Octagon. Against a talented knockout artist who owns 19 career finishes via strikes, Souza bullied Mousasi on the feet with power punches and pressured his foe to the fence for takedowns. And when the fight did hit the mat, Jacare simply dominated.

“My game plan was to use my ground game,” Souza said. “I just keep looking for an opening, so I can get a submission. I don't have in mind a specific position to use in the fight, I just keep my mind open for what presents itself in front of me and I try to capitalize on it in the moment. That kimura was like that. The opportunity was there and I tried to get that submission, but it didn't work, so I reset and started over again. Later, during the flow of the fight, I was able to see the opportunity for that position and, at the same time, my corner yelled ‘guillotine’, so I was able to trap his hand with my legs to avoid his defense and sunk the submission. That submission was about being able to see the opportunity, good timing and pressure.”

While his stand-up looked great, the real show begins when Souza gets the action to the ground. The multiple-time ADCC Submission Wrestling World Championships and World Jiu-Jitsu Championships gold medalist added his 12th submission finish to his pro MMA career tally with his slick guillotine choke of Mousasi after threatening with a kimura for much of the first and second round. Not many have the revered BJJ credentials that he has, but even less have translated those skills into the Octagon like Jacare. The win over Mousasi showed a ground attack that was as suffocating control-wise as it was offensive hunting for a finish.

“I believe after all these years fighting MMA, I have had the opportunity to adapt my BJJ game to MMA and I have put a lot of time and sacrifice into it,” Souza said. “I think a lot of BJJ fighters these days are not going through what I went through and they want to fight MMA right away. When I grapple in my fights, even when I cannot get a submission, I am still able to apply a lot of pressure and steal my opponent’s energy, so if I cannot finish him, I will at least make him more tired for the next round. There is no mystery. It is about dedication in my jiu-jitsu game - a lot of training and a lot of adaptation for MMA.”

Up next, Souza will head to Newark, New Jersey for a co-main event spot this Saturday to take on familiar foe Chris Camozzi. Originally, Jacare was going to put his seven-fight win streak (including four straight inside the Octagon) on the line against fellow top contender Yoel Romero. Unfortunately, the former Olympic silver medalist in freestyle wrestling pulled out of the bout due to an injury less than two weeks away. Thankfully, someone did step up to take the fight - The Ultimate Fighter 11 alum Camozzi.

It’s not surprising at all knowing that finding a replacement within a week’s time to tangle with Jacare was quite difficult. What is surprising is that the replacement is Camozzi, who was previously submitted by Souza in May 2013, which was Jacare’s UFC debut and the end of Camozzi’s impressive four-fight win streak. No doubt the 21-9 pro who is coming off two fast stoppage wins outside of the UFC wants to avenge his loss at all costs.

In preparation for Camozzi, Souza is busy training in his native Brazil alongside some of the best and brightest the country has to offer at the renowned X-Gym.

“The main formula is to keep an open mind, try to learn from everyone around you, always look for different training partners and, most of all, keep pushing forward and try to evolve every day,” Souza said. “I train at X-Gym in Rio de Janeiro, Brazil with MMA head coach Josuel Distak, conditioning coach Rogerio Camoes, wrestling coach Adrian Jaoude, Muay Thai coach Pedro Rizzo, and Jiu-Jitsu coach Sylvio Behring. I have many tough training partners, especially Erick Silva and Rafael ‘Feijao’ [Cavalcante]. My coach brings pro boxers in all the time for us to spar. Our team is pretty tough and there are so many good training partners. I am blessed!”

On April 18th at UFC on FOX: Machida vs. Rockhold, two middleweights will collide as Jacare aims to stay undefeated inside the Octagon against Camozzi. Regardless of who is in his path toward the title, Jacare is ready and looking to finish them.

“I love challenges and, for sure, I am going to go there and dominate him,” Souza said.