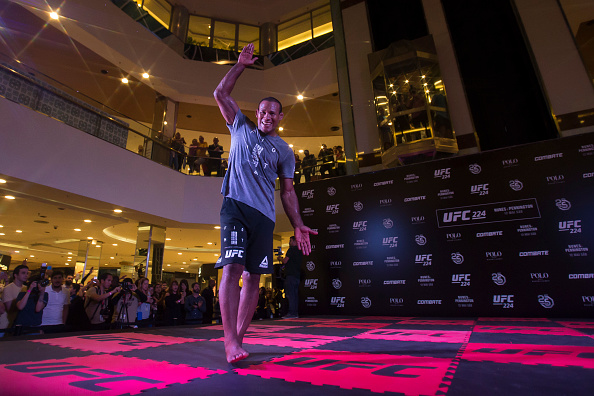 Ronaldo “Jacare” Souza is in a good mood on fight week as he approaches his Saturday co-main event against Kelvin Gastelum. His move to Orlando, Florida seems to suit him well, and while longtime manager Gilberto Faria is still handling the bulk of translation duties for the Brazilian middleweight contender, Souza’s English is starting to come together.

“Yeah, I’m trying,” he said. “My English is good like your Portuguese.”

He laughs and I tell him the two words I know in Portuguese.

I’m always in for Churrascaria. But first, there’s business to be taken care of, and the No. 2-ranked Souza will get a fight out of the No. 5-ranked Gastelum in an intriguing battle that could put the winner in a title fight. That’s a lot to think about and deal with, but Souza is all about Saturday night.

“The only thing on my mind right now is winning this fight, winning well, and that’s it,” he said through Faria. “Then everything else will come in place.”

Sounding cool and relaxed before a major fight, Souza may feel that way because many thought he wouldn’t be back in this position, at 38, after a TKO loss to current champion Robert Whittaker in April of last year. Souza was one of those who felt that way.

“My last two injuries that I had one after another was something that took me down and made me rethink my career,” he said. “Those injuries might be a reason to stop, but when I was finally feeling well from my last injury, I thought about it and realized that I’ve got a lot of wood left to burn and I decided to keep it going. And moving to Orlando, plus the new gym and the new group, it all added up and made me feel young and ready to go again. I was rejuvenated.”

Souza’s move from Rio to Orlando was a surprise, but when he scored a spectacular first-round knockout of Derek Brunson in their January rematch, no one was questioning the move anymore.

“Everything just worked out so well,” he said. “My adaptation has been great and I have a great camp. Right now, I’m feeling in my best shape and I’m ready to go.”

And it’s key to point out that one of the best grapplers to ever grace the Octagon effectively finished Brunson with a head kick. I thought he was the jiu-jitsu guy?

“Right?” laughs Faria. “The new team and the new coach are really letting him do whatever he wants. They say, ‘What do you feel like you want to do this fight?’ And they help him put together the technique and the game plan.”

It’s the kind of jolt that can keep things fresh for a veteran who needed a new perspective and some new faces to get him ready for the next phase of his career. And if keeps looking like he did against Brunson, I suggest Jacare may have another ten years in this.

“You tell him that,” said Faria.

“You’re pumping him up, come on,” adds Faria. “We’ll see Saturday. But he’s happy and he’s healthy. We’ve been together a long time and I can tell he’s in a phase where he’s really, really happy with everything, and that keeps his mind in the game. I think he’s gonna be around at a high level for a while.”