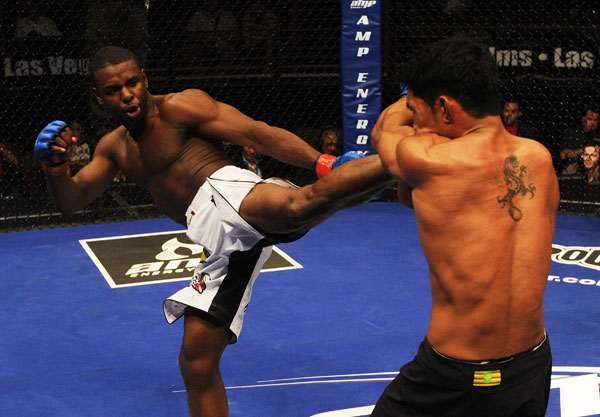 There is some bad news for the UFC’s featherweight division: Yves Jabouin can wrestle too. After earning 11 of his 15 wins by knockout, Jabouin was supposed to be just another striker. Just another “lightning quick with phenomenal precision and a wide variety of attacks” striker. That alone was worrisome enough for the ever expanding 145 pound weight class. The problem is that this “Tiger” is not satisfied and will not stop until, in his own words, he is “perfect” in all the areas of mixed martial arts.

“It is mostly me being a perfectionist. I want to be perfect at every aspect of these martial arts for MMA. I’m already a very good striker, but I always want more weapons in my striking. Whether it is Muay Thai that gives you more power or the finesse of Jiu-Jitsu. I want to perfect these aspects and bring them altogether, so I can be the best that I can be.”

At WEC 52, the weapon in Jabouin’s arsenal that was on full display was his ground game. “I was able to showcase in that fight that I’m not only a striker, but that I have very good wrestling and Jiu-Jitsu as well,” remarks Jabouin of his unanimous decision victory over Hawaiian Brandon Visher. “It was a very good fight for me and I was happy with the performance. I think I demonstrated that I’m a complete MMA fighter and the results speak for themselves.”

“Tiger” successfully out wrestled and out worked Visher for the 15 minutes, which was highlighted by Jabouin’s numerous takedowns. It was a side of the Haitian-born fighter that fans had yet to see in his two previous outings in the WEC. “A lot of people that I have never trained with were saying how surprised how good at wrestling I am,” continues Jabouin, yet there is still more left to be revealed, “but I still have a few tricks that I don’t show off all the time.”

One of those “tricks” might be Jabouin’s guillotine choke. Maybe the most surprising moments of the Visher fight were the 31 year old’s submission attempts, which he credits to his special guest cornerman that evening: Miguel Angel Torres. “Those guillotine attempts were coming from him; he is a master of guillotines,” says Jabouin about the newest member of Tristar Gym in Montreal, where Jabouin has trained for the better part of a decade. “When Miguel comes down to train, my Jiu-Jitsu improves a lot. He helps me a lot with that. Miguel brings a lot to the camp.”

The next opponent to face Jabouin’s ever improving ground game will be a UFC history maker: Pablo Garza. In the UFC’s first ever featherweight bout, “The Scarecrow” started this new division off with a bang by knocking out Fredson Paixão with a flying knee just 51 seconds into the opening round. Even better, the 6’1” Garza’s record reflects that of a submission fighter with 6 of his 11 wins coming via submission; nevertheless, “The Scarecrow” won the “Knockout of the Night”.

“It’s going to be a challenge, especially with his reach advantage. Although, I’m usually one of the shorter guys, so I’m used to fighting taller guys. He looks like a complete fighter. He has a very good ground game and from his last knockout he is very dangerous standing as well. I will have to be careful of that.”

On April 30th in Toronto, Canada, “Tiger” will be making his UFC debut against Garza in what will be the largest event in the company’s history, and it is in Jabouin’s adopted homeland no less. “It’s an opportunity to fight within my home of Canada with my fanbase,” relates Jabouin, who moved to Montreal as a child with his mother and his two siblings. “I think it is going to be great to be a part of an event this big and where it is. I’m really grateful to the UFC to be a part of this.”

Both professionally and personally, this UFC 129 fight will be the culmination of a near lifelong endeavor in martial arts for Jabouin. “I started martial arts at a young age; I must’ve been about 10 years old,” explains Jabouin, who was attracted to not only the physicality, but also the ideas within it. “I tried every martial art, whether it was kung fu or tae kwon do out of passion for the art and the philosophy behind it. It brought all these positive aspects to my life, like discipline.”

A fighter who has such a healthy respect for what martial arts has to offer beyond kicks and punches needs a fight team that shares those same beliefs: Tristar Gym. The ringleader, Firas Zahabi, of Tristar and its star pupil, UFC welterweight champion Georges “Rush” St-Pierre, are obvious disciples of this same way of thinking. It is a sensibility that has attracted numerous fighters like Miguel Torres and Kenny Florian to its doors.

“I found the right team because all these guys are the same way as me. Georges St-Pierre, he comes from a karate background and he follows those philosophies as well. Firas is a philosopher. Everything he explains and everything he shows, he explains it in a way that you can grasp the concept of the move and not just learning the move to do the move. All of us are not just into the sport, but we are into the true meaning of mixed martial arts.”

After 20 plus years in martial arts, Jabouin’s absolute love for it continues to grow, especially in wrestling and Muay Thai. “My athleticism is very explosive and these two disciplines go very well with it”, he says. As mentioned, “Tiger” is infusing wrestling into his striking base by training with the Canadian national wrestling team alongside his teammate St-Pierre.

“I only started wrestling five or six years ago,” he said, “but I have a natural talent for it.”

Jabouin is also still finely tuning his stand-up with Muay Thai training under the legendary Kambalay “Peter” Sisomphou. “I have done a lot of kickboxing, but I had never really done Muay Thai,” Jabouin discloses, noting that with all this training, his stand-up game will always come first. “The martial art that I started with was karate and it is a striking-based martial art. I think the art you start in really gets into your sub-conscious and that remains the base foundation of whatever you put on top of it.”

At UFC 129, Pablo Garza will be stuck with the difficult enough task to defeat the “Tiger” in front of his cheering countrymen. The additional problem for Garza is that Jabouin sounds just as eager to knock him out as he does to out wrestle him. In his journey towards perfecting himself as a martial artist, Jabouin might do both, which is simply bad news for Garza.