Iuri Alcantara: The Run to a Title Shot Begins

"It feels great to fight at home and with my fans in my favor. I’ll fight with pride for my fans and I will represent my country well." - Iuri Alcantara 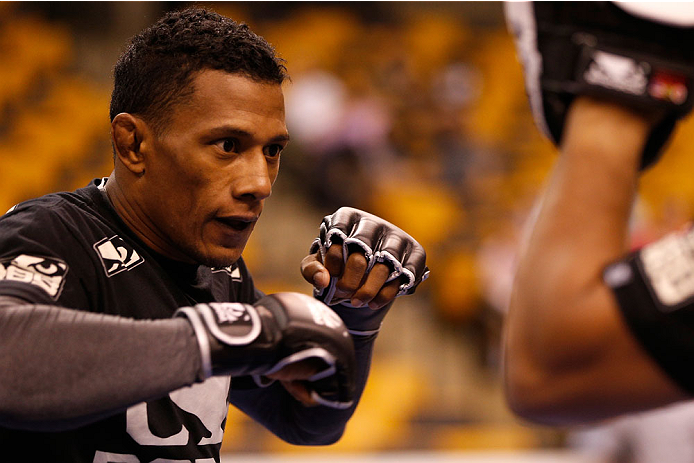 Every fighter competing at the top level of MMA has that one certain something they do better than most. For Iuri Alcantara, that particular attribute is tenacity, and it’s proven to be a tough element for his opposition to handle. It is a quality in the Brazilian livewire’s skill set that only seems to be getting more intense, and his past five showings under the UFC banner have certainly supported this notion.

Even though the 34-year-old suffered a unanimous decision loss to former WEC featherweight champion Urijah Faber and a controversial no contest against Pedro Nobre as the result of inadvertent strikes to the back of the head during his recent run, “Marajo” has driven his profile to new heights on the strength of his performances.

He steamrolled Nobre in the first round of their tilt in January of 2013, then gave “The California Kid” hell for three rounds when the two surging bantamweights locked up at Fight Night: Shogun vs. Sonnen eight months later in Boston. Yet, in addition to those unfavorable outcomes, Alcantara has also gone on to win three bouts over this stint, and has done so in impressive fashion.

In his most recent showing, the slick Brazilian veteran pummeled striker Vaughan Lee as he starched the British slugger just 25 seconds into the fight. It was the quickest finish of Alcantara’s career, and anytime that type of power, speed and timing are put on display, it sends a message to the rest of a division.

Yet, no matter how impressive it may have appeared to those watching, the highlight reel finish is precisely the outcome Alcantara had envisioned.

“My performance in the fight against Vaughan Lee was as expected,” Alcantara said. “I trained hard and applied myself enough to get the win just 25 seconds into the fight, which left me very satisfied. I did a good job.”

With back-to-back victories and wins in three of his last four, Alcantara is starting to make some moves up the bantamweight divisional ladder. And while it’s his goal to fight his way into a title opportunity at 135 pounds, the Marajo Brothers team leader knows there is a bit more work to do before he’ll see the biggest names in the division standing across from him inside the Octagon.

There will be plenty more challenges to come and his next obstacle will come in the form Russell Doane at Fight Night: Arlovski vs. Silva in Brasilia, Brazil on September 13. While the talented Hawaiian has been on a hot streak of his own, he will be facing Alcantara on his native soil, and the passionate Brazilian fan base has been known to create an environment unrivaled anywhere in combat sports.

Fighting a tough opponent and having the chance to compete at home once again have Alcantara fired up to give his countrymen a show on Saturday night.

“[Doane] is a very versatile fighter,” Alcantara said. “He moves a lot and has good ground and pound. He deserves all my respect, but he can have a tough fight.

“It feels great to fight at home and with my fans in my favor. I’ll fight with pride for my fans and I will represent my country well. The UFC coming back to Brazil is a great gift to the Brazilian fans and is a true recognition for this country that is full of talent and fans of MMA.”

Should Alcantara find the recipe of success against Doane on Saturday night, he will have put together three consecutive victories in a division that has been shaken up as of late. Former long-reigning champion Renan Barao was upset and dethroned by T.J. Dillashaw back in May, which sent a shockwave through the ranks of the divisional hierarchy.

While the immediate rematch was set for UFC 177 last month, the Nova Uniao product was forcded to withdraw due to a medical issue, and UFC newcomer Joe Soto was tapped to face the Team Alpha Male standout in the card’s main event. Nevertheless, Dillashaw would go on to successfully defend his title, but the aftermath of UFC 177 has the 135-pound weight class looking as it is about to hit an era of chaos akin to the “Wild Wild West” days of American folklore.

There are a handful of capable gunslingers aiming at the divisional crown, and with former champion Dominick Cruz set to return later this month and a host of perennial contenders staying true to form, the bantamweight ranks are looking more competitive than ever.

These are precisely the circumstances Alcantara is hoping for as he climbs closer and closer to the top of the mountain at 135 pounds. He is confident he is one of the best bantamweight fighters walking the planet, but the only way to stamp that as certified is to put championship gold around your waist.

“I am feeling good in this division and I’m full of willingness to fight for the belt, “Alcantara said. “My goal is to reach the belt and I’ll go over whatever is in my way. I’m working every day toward this and I sleep thinking about the belt.

“I am ready and willing to fight for the belt with anyone who crosses my path. I’m always aiming to do a fair fight and put on a great show for the fans. I want them to see a war every time I fight inside the Octagon.”