It's a Triumphant Return for Rampage 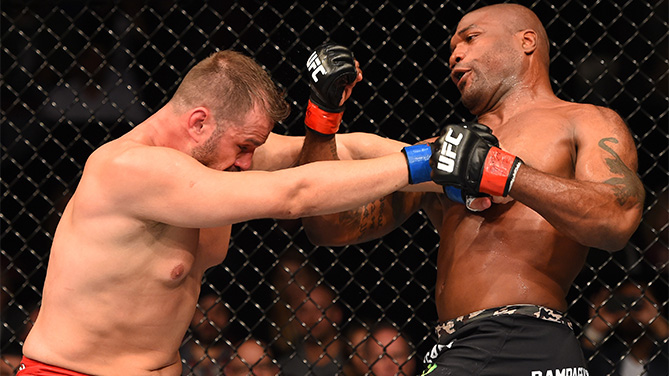 A week ago, Quinton “Rampage” Jackson didn’t think he would be fighting in the UFC 186 co-main event against Fabio Maldonado, but after a last-minute overturning of a court injunction, Jackson was back in the Octagon on Saturday for the first time since 2013, and while he wasn’t back in light heavyweight championship form, he did impress in outpointing the Brazilian over three rounds at Montreal’s Bell Centre.

The expected slugfest didn’t break out in the first round, and when it came to effective offense, it was all Jackson, who mixed things up nicely, working in a jab with some hooks and hard knees.

Maldonado’s smothering clinch game slowed things down even further in the second round, even though Jackson’s work when the two were separated was still the better of the two. With two minutes left, the crowd began getting restless at the lack of action, but Jackson rallied late, enough so that Maldonado shot for – and got – a takedown right before the bell.

Maldonado showed no sense of urgency in the final round, allowing Jackson to push the pace for the last five minutes and seal the well-deserved win. 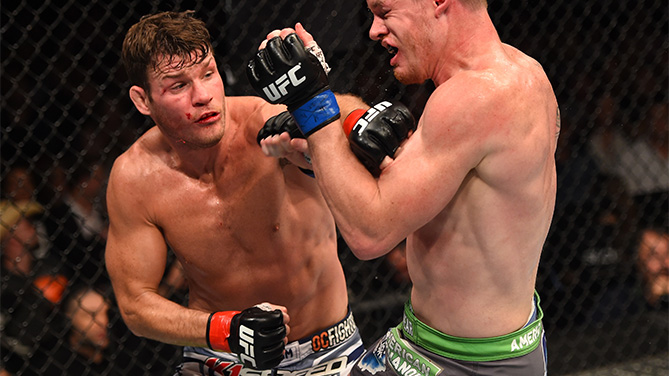 Middleweight contenders Michael Bisping and CB Dollaway delivered the goods from start to finish in their exciting three-rounder, with Bisping taking a close, but unanimous, decision victory.

Dollaway took an early lead behind some strong kicks to the body and head, but Bisping settled in soon enough, using his in and out movement and quick combinations to take over until the final minute, when Dollaway sent Bisping to the deck with a left hook. “The Count” eventually cleared his head, and by the final moments of the round, he was flurrying and capping things off with a kick to the head at the horn.

Clearly recovered from his trip to the mat in the first round, Bisping regained control of the bout behind his stick and move attack and solid takedown defense. With less than two minutes remaining, Bisping stunned Dollaway with a right hand, but “The Doberman” fired right back, thrilling the crowd. In the final minute, Dollaway landed two more hard left hooks, cutting Bisping over the right eye, and he even got his first takedown late in the frame.

Dollaway started his third round offense with a takedown, Bisping hopping up within seconds, but he soon ate another left hook from the Arizonan. Bisping responded a few moments later with a stiff right hand, and his always impressive cardio allowed him to keep his work rate high to the end. 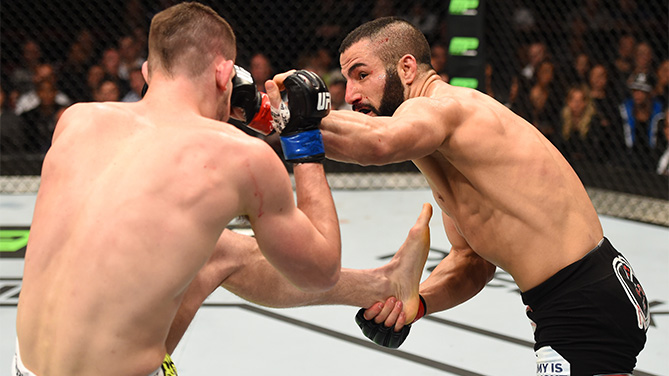 Returning to the Octagon for the first time since February of 2014, John Makdessi delivered his second consecutive knockout win, halting late replacement Shane Campbell in a 160-pound catchweight bout.

Showing no sign of the first-time Octagon jitters, Campbell – who replaced the injured Abel Trujillo – landed almost at will in the early going, but while Makdessi took several hard leg kicks, he soon found his range and then dropped Campbell to the mat. Makdessi opened fire in an effort to finish, but the tough newcomer was able to survive. The dynamic of the fight had changed though, and now it was Makdessi in command, with the end coming in the closing seconds of the round as he knocked Campbell down a second time and finished him off with a flurry of blows that brought in referee Phillippe Chartier at the 4:53 mark.

Montreal’s Makdessi moves to 13-3 with the win; Kelowna’s Campbell falls to 11-3. 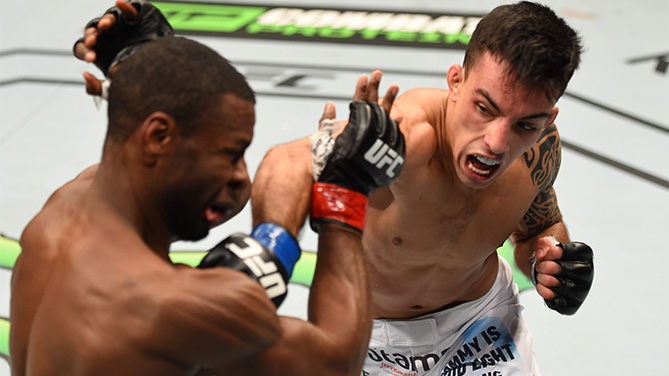 Brazilian banger Thomas Almeida scored the most important win of his MMA career in the main card opener, stopping Canadian veteran Yves Jabouin in a single round.

After a tentative opening from both, Jabouin scored first with a takedown in the second minute, but Almeida didn’t stay there long, shooting right back to his feet. The brief trip to the mat prompted the Brazilian to get his offense in gear, and he upped his work rate significantly, putting Jabouin on the defensive.  In the final minute, a left hook rocked Jabouin and Almeida kicked his offense into yet another gear, picking his shots perfectly until referee Yves Lavigne stepped in at 4:18 of the opening stanza.