It's Time To Put Julio Arce On The Map

Julio Arce Believes A Statement Win Over Song Yadong At UFC Fight Night: Holloway vs Rodriguez Firmly Places Him On The Bantamweight Map As A Contender.
By Gavin Porter, On Twitter @ItsGavinPorter • Nov. 11, 2021

Since punching his ticket to the UFC via Dana White’s Contender Series, Julio Arce has had an up and down path.

Serious injuries left the talented prospect on the shelf for nearly two years and forced him to reevaluate a couple things. Missing out on fighting gave Arce perspective and allowed him an opportunity to fine tune the mental aspects of his game.

“It gave me a chance to work on a lot of mental aspects of the game and, at the same time, I had double elbow surgery so my arms were stuck and I had to fully extend so I got that fixed. When you’re away from fighting for a while, you start to look at the things that you might have not had or that you might have missed so you start tweaking these little details,” Arce told UFC.com. “It’s like driving on an open highway - you just zoom straight by but when you really look at it you kind of slow down to see the scenery around you so that’s exactly what I did.”

MORE UFC FIGHT NIGHT: Fight By Fight Preview | Fighters On The Rise | Max Holloway Isn’t Afraid of The Hard Path | What Yair Rodriguez Wants With All His Heart

One of those details that Arce examined carefully was his weight class. Arce was a bantamweight when he was on the regional scene prior to making it to the UFC and he sat down with his coaches and decided it was time to make the switch.

And Arce showed why when he finally returned to action in July of 2021. Arce knocked out a tough and explosive Andre Ewell in his UFC bantamweight debut, proving that he’s finally healthy and competing in the right division.

The win over Ewell was an important one for Arce’s confidence and is giving him confidence heading into his UFC Fight Night: Holloway vs Rodriguez bout with Song Yadong.

“It was an amazing feeling because most people would say that when you’re away from fighting for a while you’ll get ring rust, this and that, but I’m like ‘nope.’ I didn’t feel it,” Arce said. “I felt that everything was the way that it was supposed to be and I got the finish and it was a huge win. It meant a lot.”

In Julio Arce's Corner: The Cornerman | The Mentor | The Doctors

A win over Song would be even bigger for Arce, who believes a statement-level win can help him make up for the time he lost while out due to injury.

“I’m viewing this fight as my way to climb the ladder and reach the top. Andre Ewell was more my comeback fight to bantamweight and remind people that I’m here,” Arce said. “With somebody like Song, he’s my next big step, the next obstacle in my way, and I have to overcome that obstacle. I have to get past him to really climb the ranks.”

Song has been a name floating around the bantamweight rankings since his impressive knockout of Alejandro Perez. He’s been viewed as a top prospect and someone that could make real noise at bantamweight, while Arce admittedly doesn’t quite have the same notoriety as his foe. 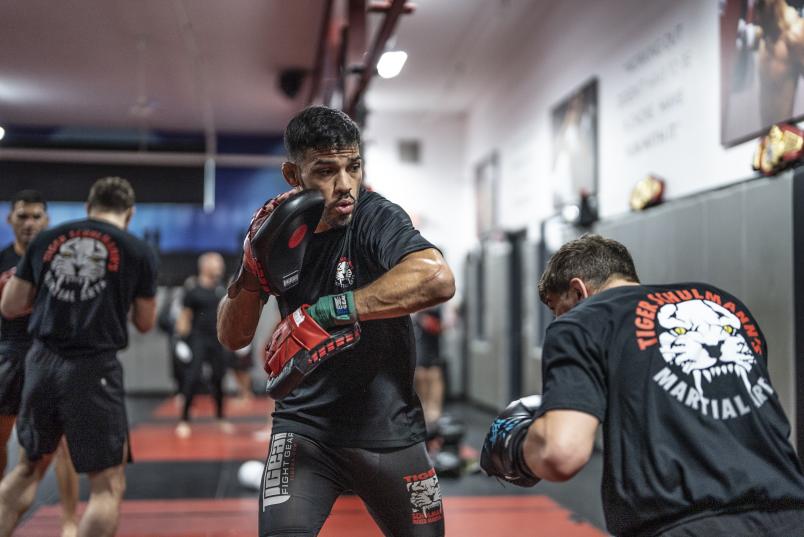 “He’s a huge name. I think he’s in a much higher position than me,” Arce said. “He’s young, he’s athletic, he’s explosive. I feel like a lot of people have hype in him and see a lot of potential in him.”

But a strong performance against Song could change that for Arce.

“Right now I’m the guy that people aren’t really looking at. I’m low-key but then eventually they are going to see me in front of them. I’m kind of like sneaking up on them,” Arce said. “I’m that person that right now they are taking a quick glance at, but I think people are going to be more aware of me as I start climbing up.”