He Respects Leon Edwards, But The Champ Has No Intentions Of Giving Up His Throne
By E. Spencer Kyte, on Twitter @SpencerKyte • Aug. 17, 2022

Kamaru Usman is the reigning, defending, undisputed UFC welterweight champion and one of the very best mixed martial artists walking the Earth today, which is why it’s surprising and a little bit comical to learn that “The Nigerian Nightmare” was initially scared of the sport he’s now come to dominate.

“I remember even asking, ‘Hey — are there rules for this?’”

That initial introduction through former UFC light heavyweight champion Rashad Evans resulted in a chance to coach on Season 14 of The Ultimate Fighter, and by the time he returned to the OTC after his stint in Las Vegas, Usman felt like he was cheating on his first love. 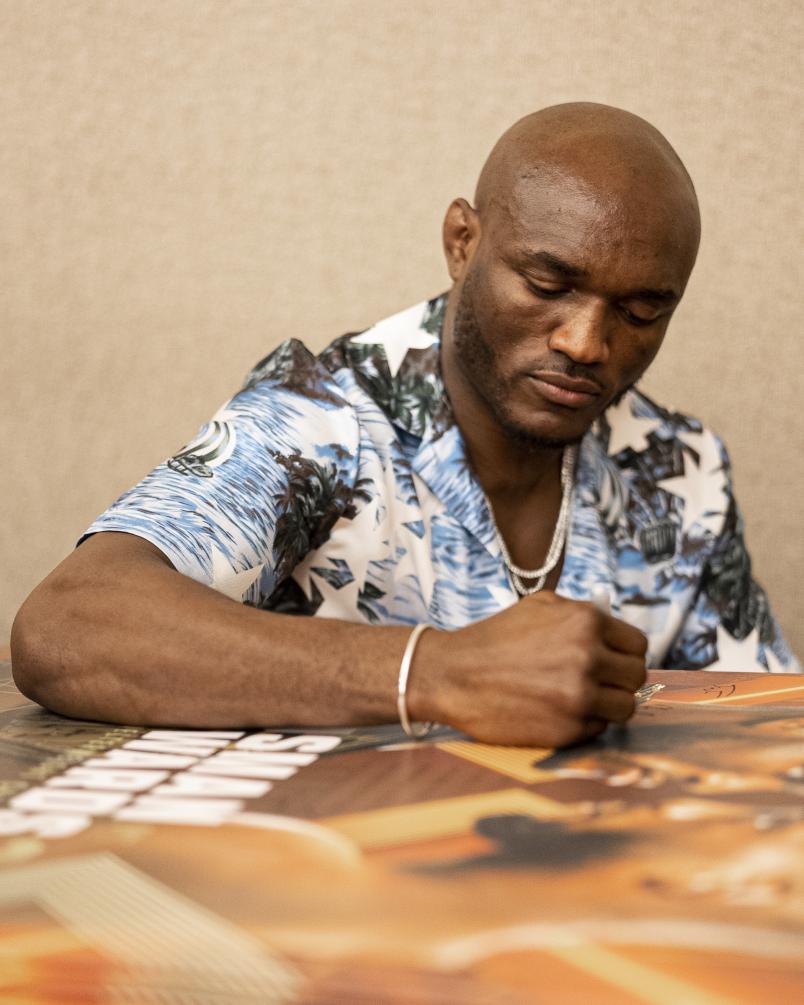 “I didn’t realize it, but at that point, MMA had gotten its claws in me,” said the welterweight ruler, who defends his title against Leon Edwards this weekend in the main event of UFC 278 at Vivint Arena in Salt Lake City, Utah. “I went back to the Olympic Training Center, training for a wrestling tournament, and in between the breaks, while we’re getting water, I’m shadowboxing in the back, in the corner.

Eventually, Usman made the shift into mixed martial arts, and while he was no longer scared of the sport itself, there were still elements he wasn’t particularly fond of during the early days of his current.

That initial connection with Evans developed into a deep bond, with the UFC Hall of Famer being the first to sing Usman’s praises, telling anyone that would listen he had the potential to do something great in this sport, doing so long before he landed in the UFC. He brought him to South Florida to train with his new team, The Blackzilians, where seasoned professionals surrounded the neophyte, and his pedigree as a Division II National champion and former Olympic wrestling hopeful made him a frequent sparring partner of a host of dangerous fighters.

“I remember very, very clearly being afraid to go to the gym on sparring days because you knew when they were going to call you out,” Usman said of the collection that included Anthony Johnson, Michael Johnson, JZ Cavalcante, and Jorge Santiago, who remains one of his coaches to this day. “I’m just starting out and I have to survive in a room like this? It’s dreadful.

“Then it became a time where I wasn’t the guy getting beaten up anymore; I was able to at least defend myself. That ultimately is what built that confidence to where when I go into these fights, of course they’re all tough — I know they’re tough — but I’ve survived a room full of killers like The Blackzilians.”

Usman rose through the welterweight ranks, rattling off eight straight victories after joining the fraternity of Ultimate Fighter winners with a second-round submission win over Hayder Hassan in his UFC debut.

He steamrolled Tyron Woodley to claim championship gold at UFC 235, but just as he was settling in as champion, the dynamics of the gym started changing and Usman began sensing it was time to make a shift. While they weren’t still called “The Blackzilians,” many of the same fighters and coaches continued to work together — at H Kickboxing, at Hard Knocks 365, and then at Sanford MMA, with Henri Hooft serving as the chief striking coach at each stop.

As the numbers in the gym grew, individual attention became harder to come by, and when he ultimate reached a point where he was set to defend his belt against long-time teammate and training partner Gilbert Burns, he pulled the trigger on shifting camps, relocating to Denver, Colorado to work with Trevor Wittman. 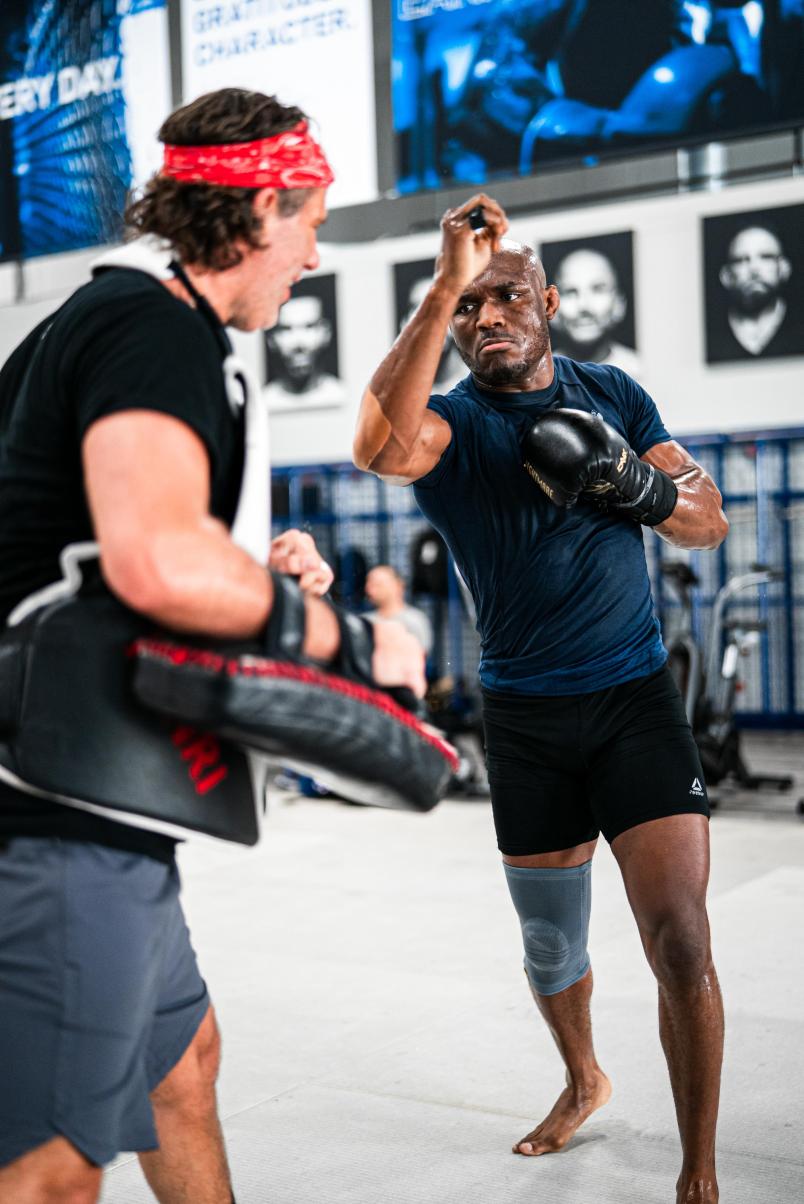 While Hooft was the one to teach the decorated wrestler and former Ultimate Fighter winner the basics, Usman saw Wittman as the master craftsman that could help him with the finer details of fighting.

“It’s exactly what I wanted at this stage of my career,” he said of training with the highly regarded, and highly selective coach, who only works with two other UFC fighters — former interim lightweight champ Justin Gaethje, and two-time strawweight titleholder Rose Namajunas. “I wanted the personal touch to my career.

“I wanted to be able to work on those little, fine details that were going to separate me from the rest of the pack. Henri Hooft did a phenomenal job teaching me how to kick and punch and block; the basics every wrestler needs to learn when they’re striking, but now it was time for me to focus on those key details — position, where to stand, how to stand, how to set traps, how to land the punch that might send people to the Shadow Realm.”

Saturday’s bout with Edwards actually serves as an interesting way to see the evolution of Usman’s game and the difference between the fighter that first entered the UFC with excellent wrestling and very little else and the pound-for-pound standout he is today, as the two men have already shared the Octagon once before.

“My first fight after winning The Ultimate Fighter was Leon Edwards,” said Usman, who won the bout by unanimous decision, relying on his superior grappling throughout the 15-minute affair. “I was very impressed with him because after three rounds at the pace and tempo that I put on him in that fight, he was still there; he wasn’t willing to go away so easily.

“He impressed me big time and something in me, I knew that at some point, I might have to fight this guy again, and here we are.”

RELATED: In Depth | Usman vs Covington 2

Just as Usman has grown since that initial encounter in mid-December 2015, so too has Edwards.

The British challenger is undefeated in his 10 fights since their first battle in Orlando, Florida, earning victories over fellow emerging talents Albert Tumenov and Vicente Luque before moving on to defeat divisional stalwarts Donald Cerrone, Gunnar Nelson, and Rafael Dos Anjos.

Last time out at UFC 263, Edwards defeated cult hero Nathan Diaz to finally cement his opportunity to share the cage with Usman for a second time.

Although he recognizes the growth in his opponent, the champion is quick to point out that he’s a very different fighter from their first encounter, as well, and that it’s his job to make it clear to Edwards and everyone else that steps into the Octagon with him that he’s not interested in abdicating his throne and allowing them to have their moment atop the division.

“In that first fight with Leon Edwards, I was merely a wrestler trying to compete in mixed martial arts,” offered Usman. “Now I’m the pound-for-pound, best mixed martial artist on the planet. I’ve learned the game, I’ve spent time learning the craft of this sport, and if Leon still thinks and believes that I’m the same guy, it might be a short night for him.

“Leon right now is the biggest, baddest dude in the welterweight division — he poses the greatest threat, which is why I believe he is the No. 1 contender. I think he is a great fighter — very sharp, very skilled — and now it’s starting to click in his mind to where he’s feeling this is his time, this is his moment, that he is ready for this.”

“But as the champion, it’s my job with each and every one of these guys, to let him know that it’s not his time yet.”