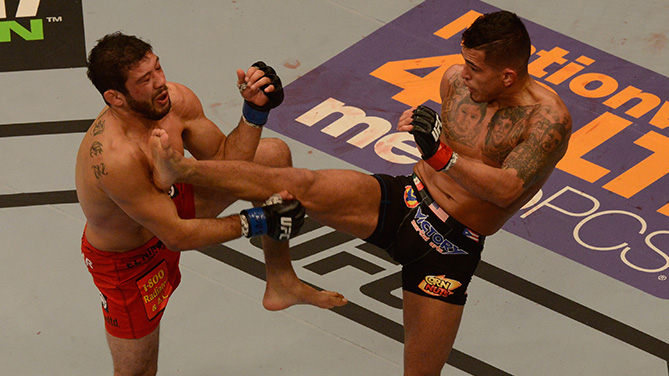 After a 15 month layoff due to injury and a coaching stint on The Ultimate Fighter 20, Anthony “Showtime” Pettis returned to the Octagon and logged the first successful defense of his UFC lightweight title, submitting number one contender Gilbert Melendez in the second round of the UFC 181 co-main event at the Mandalay Bay Events Center in Las Vegas.

“It was a rough last year, but I reminded everybody who I am,” Pettis said. “I’m the champ for a reason, king of the hardest division in the UFC.”

In his first bout since his title-winning effort against Benson Henderson in August of 2013, Pettis got a fight out of Melendez, but in a game of inches, Pettis was quicker to the draw when it mattered.

“He’s a fast, slick youngster, and he made me feel a little old today with his speed,” the 32-year-old Melendez, a former Strikeforce and WEC champion, said.

Opting against a touch of gloves, the fighters engaged immediately, Melendez using a flurry of punches to lock up with Pettis against the fence. Melendez got a brief takedown, and while Pettis rose quickly, “El Nino” stayed on him like glue, trying to get his strikes off while Pettis tried to tie him up and force a restart. Midway through the round, Pettis broke loose, but again the relentless pressure of Melendez produced a takedown. After rising a second time, Pettis got off kicks to the head and body, both of which were taken well by Melendez. In the final minute, Pettis began to get his range with his strikes, allowing him to end the round strong.

Melendez appeared to get rattled briefly by Pettis during an exchange early in the second, but he kept coming in, throwing combinations the whole way. His shots weren’t getting Pettis’ attention though, and after Melendez got rocked with a right hand and dropped for a takedown after one of those heated exchanges, Pettis pounced and locked in a guillotine choke that forced Melendez to tap out at 1:53 of round two.

With the win, the 27-year-old Pettis ups his record to 18-2; Melendez, who had never previously been finished in his career, falls to 22-4.
> Watch: Anthony Pettis Backstage Interview | Anthony Pettis Octagon Interview 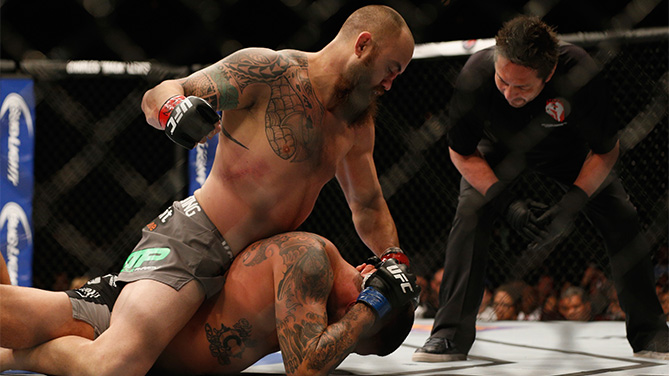 Number three-ranked heavyweight contender Travis Browne got back in the win column in his first bout since an April loss to Fabricio Werdum, stopping Brendan Schaub in the first round.

After a slow start, the action began to pick up two minutes in, with Schaub scoring two quick takedowns. Browne was able to make it back to his feet quickly, and with less than two minutes remaining he tagged Schaub with a right uppercut and the bout went back to the mat. This time, it was Browne in control, as he moved quickly into the full mount. Schaub turned and gave up his back, and it was there that Browne finished matters, with a series of ground strikes bringing in referee Mario Yamasaki to halt the bout at 4:50 of the opening frame. 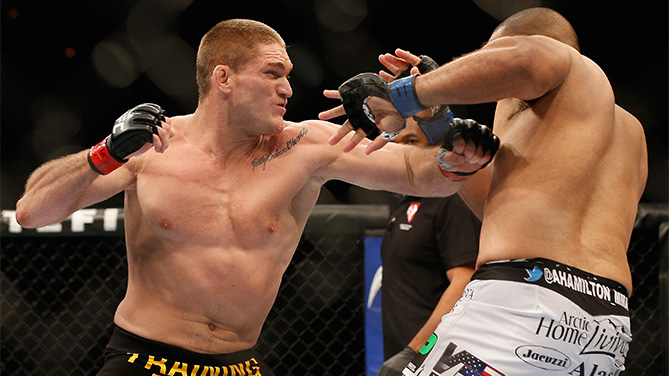 Todd Duffee has slowed down since his UFC debut in 2009. Instead of knocking opponent Anthony Hamilton out in seven seconds like he did Tim Hague at UFC 102, it took 33 ticks of the clock.

The win was Duffee’s third straight, but his first fight since December of 2012. He has since been dealing with Parsonage Turner Syndrome, but after being cleared to fight again, he got right down to business, landing first in the midst of a slugfest, putting Hamilton down and out and forcing referee Herb Dean to halt the fight at the 33-second mark. 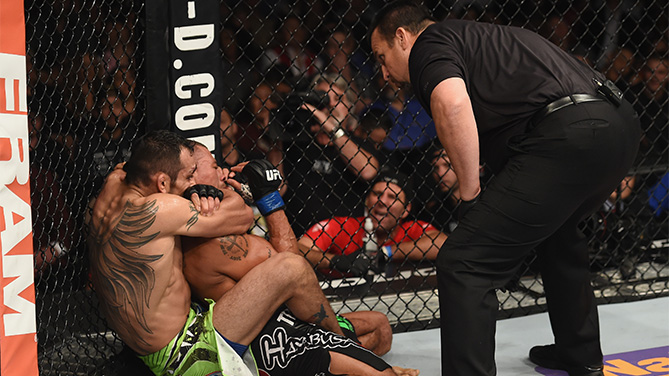 Former Ultimate Fighter winner Tony Ferguson impressively made the move from prospect to contender in the lightweight division, weathering an early storm from Abel Trujillo before submitting his foe in the second round.

Trujillo drew first blood, dropping Ferguson with a right hand in the opening minute. Ferguson scrambled out of trouble and got back to business, but after some stand-up success, he got taken down by Trujillo. Ferguson got back to his feet quickly, and after a brief lock-up against the fence, the two separated. Midway through the round, Trujillo scored another takedown, and after some hard ground strikes, he let “El Cucuy” get back to his feet. Undeterred by the rough start, Ferguson began finding his range with his strikes from a distance, allowing him to get back in the fight.

In the second, Ferguson began to press the tiring Trujillo on the ground, keeping the Floridian moving throughout, emptying his gas tank even more. Finally, with under a minute left, Ferguson locked in a rear naked choke, with the tap following soon after at the 4:19 mark.

With the win, Ferguson ups his record to 18-3; Trujillo falls to 12-6 with 1 NC.
> Watch: Tony Ferguson Backstage Interview