Elias Cepeda checks in with Georges St-Pierre's trio of coaches as the champ prepares for his long-awaited comeback... 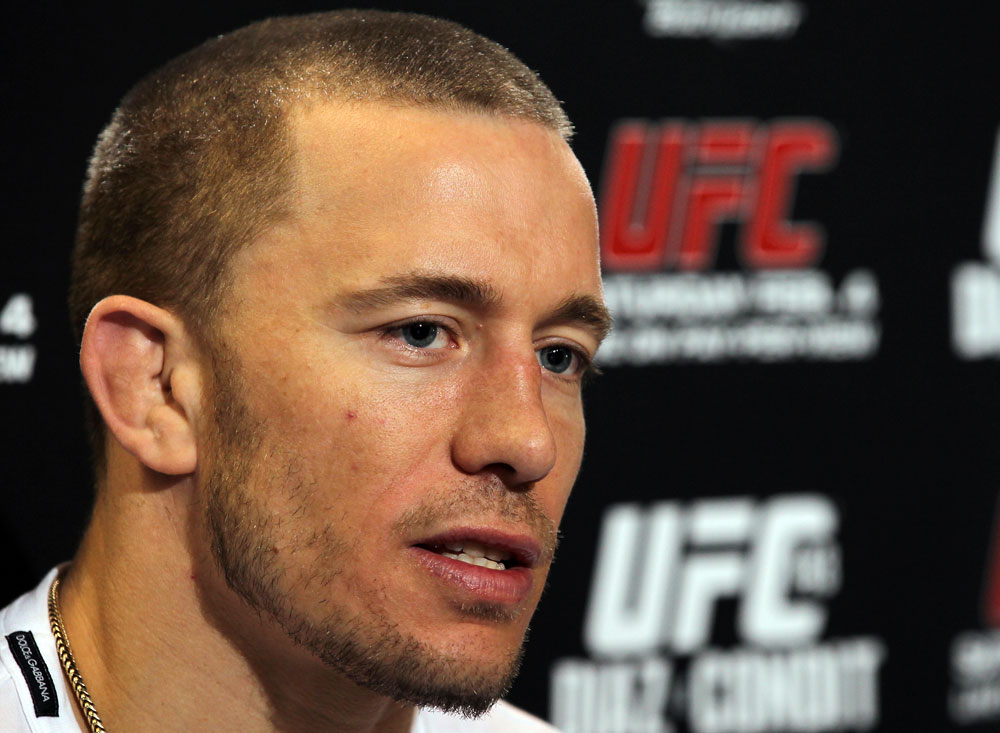 In April of 2011, Georges St-Pierre dominated Jake Shields in the main event of the historic UFC 129 in Toronto to successfully defend his UFC welterweight championship. Yet because of a torn ACL in his knee, St-Pierre has not fought in the near year and a half since and fight fans have had a serious “Rush” deficit, missing one of the sport’s best and most likable competitors.

On August 28, GSP was finally medically cleared to begin full training for MMA competition and is planning on facing interim belt holder Carlos Condit in November. That’s the good news. The more worrisome issue is that we simply won’t know how well he has recovered until he steps foot into the Octagon again.

Not many years ago, ACL tears were considered career-ending injuries in most sports. St-Pierre is known for his athleticism and dynamism and fans are wondering if he will be the same fighter he has been in the past.

UFC.com sat down with some of St-Pierre’s coaches to get their perspectives on the fighter’s recovery. Below, head coach Firas Zahabi, Muay Thai coach Phil Nurse and Brazilian Jiu Jitsu legend Renzo Gracie talk about the characteristics GSP possesses that have made him the fighter he is and why they think he’ll continue his reign.
--
“He didn’t throw a punch for six months,” Tristar gym leader Firas Zahabi says of St-Pierre. “This is definitely the longest Georges has gone with that level of inactivity in his career.”

Because of St-Pierre’s physical limitations while recovering from ACL reconstructive surgery, Zahabi knew that it was important to keep his mind engaged. “I got him into coaching. He’d continue to come to the gym and watch practice. He cornered several MMA fights with me. Coaching kept Georges’ head in the game,” he said.

Eventually, St-Pierre was able to resume some training of his own, but Zahabi says that they moved slowly to guard against re-injury. “We were very gradual. We took baby steps,” Zahabi says. “It was incremental, taking small steps into larger and faster ones. He started by sparring two rounds in a row but then by late August was doing five rounds in a row. We started him with lighter guys, 135-145 pound fighters, then moved him to lightweights and just recently began working in welterweights.”

Zahabi likens St-Pierre getting back into fight training to someone re-learning how to walk. “It was like him learning to walk again. At first it is hard but then you remember it and its natural once again,” he says.

The head coach says that he’s confident that St-Pierre will be back in fine form, in large part, because he’s a natural and practiced competitor, above all else. “Georges has been competing since such a young age that it is ingrained in him deeply. He’s been kicking and punching since he was eight or nine years old. His brain is hard-wired to compete and fight at this point,” he says.

St-Pierre’s Muay Thai coach Phil Nurse says that, as recently as a couple weeks ago, he saw firsthand that the fighter is his old self again. “He came in a couple weeks ago and what I was looking for, mechanically, was that he wasn’t shying about that leg, that he wouldn’t want to do certain things because of it,” Nurse explains. “So I told him ‘let’s just spar,’ because with sparring you can’t really predict what’s going to happen. In sparring and fighting you don’t know what is going to happen, how your opponent is going to move. You just know he’s trying to hit you and that you’re trying to hit him.”

Nurse was heartened by what he observed and felt from St-Pierre. The champ quickly picked up on the things his coach threw at him, adjusted and then began mounting his own creative offense.

“He just started doing what he’s always done,” Nurse says. “He started seeing what I was doing, he kind of looked for the answers…regardless of what footwork or what trick it was or what maneuvering it needed, he did it. And then he started growing into it more.

“I’ll show him a move while we’re sparring. He’ll see it, try to shut it down and then he’s learned it and he’ll start being more creative with the same move. ‘Coach, could I use that move like this and like this in there? And could I disguise it like this and put it there at the same time?’

“If you’re thinking about an injury, you wouldn’t be so creative. To me, I didn’t see nothing much different. He’s the same old Georges. He’s still creative, still trying things out. There was no, ‘I can’t try that because of,’ he just carried on.”

When Jiu Jitsu coach Renzo Gracie got his hands on St-Pierre a few weeks ago, he says he was shocked to feel that the supposedly still-recovering fighter was quick, explosive and more technical than he had been before. “His Jiu Jitsu was already good before, but when he came in here and trained [a couple weeks ago] I could tell he must have been doing a lot of work,” Gracie said with excitement.

“His technique is even better than it was before the injury. He had the same strength and explosiveness as before, but was more technical. He’s always learning, that guy. Everywhere he goes, at all times, he’s studying and doing whatever training he can.”

Nurse also says that St-Pierre seems re-energized and motivated to return to competition. “He kept telling me, ‘wow, I feel so great, I feel so energized. Even though I’ve had a long break I just feel like, for whatever reason, my body needed it, I needed it because now I feel so hungry again. I’m hungry to go back into fighting.’ It’s probably a good thing,” Nurse says of St-Pierre’s injury, recovery and time off.

Now that it is time to focus on fighting Condit, Zahabi says that he personally does not have any extra motivation in coaching against the interim champ’s trainers, Greg Jackson and Mike Winkeljohn, who used to lend a hand with St-Pierre’s preparation during training camps. “No, it doesn’t matter,” Zahabi says. “They are just two guys who I have a high regard for. To me, they are friends. They always prepare their fighters in the best possible way.”

Something else that doesn’t matter, for the moment, is a possible super fight with middleweight champion Anderson Silva, according to Zahabi. It is all about the Condit fight in November, for now.

“We haven’t talked about [fighting Silva] much lately because we are always talking about Condit,” the coach says.

“We don’t want to disrespect Condit. We underestimated Matt Serra before while thinking about other fights and we learned our lesson then. Anderson, yes, I think it’s a good fight, but we consider Carlos Condit to be the biggest challenge Georges has ever faced.”