It's Jones vs. Gustafsson on EA Game Cover 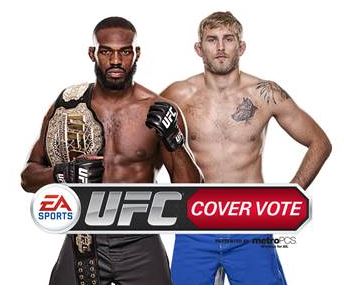 Las Vegas, Nev. - Electronic Arts Inc. (NASDAQ: EA) and the Ultimate Fighting Championship (UFC®) announced today that Sweden’s Alexander ‘The Mauler’ Gustafsson, the no.1 UFC light heavyweight contender,  is the winner of the EA SPORTS™  UFC Cover Vote presented by MetroPCS. Gustafsson will share the first ever EA SPORTS UFC cover with current light heavyweight champion, Jon ‘Bones’ Jones, who EA announced last month as the first cover athlete. It's a fitting pairing, as the two also met in the Octagon® earlier this year, engaging in a five-round Fight of the Year candidate at UFC 165. Fans cast over 11 million votes throughout the cover vote program. Gustafsson edged out legendary welterweight champion Georges St-Pierre in the final round, emerging victorious from a field of 16 fighters that also included champions Anthony Pettis, Ronda Rousey, Jose Aldo, Chris Weidman and Demetrious Johnson. EA SPORTS UFC will be available for the PlayStation® 4 computer entertainment system and Xbox One, the all-in-one games and entertainment system from Microsoft, in the spring of 2014.

“It’s a thrill and an honor to appear on the cover of the first ever EA SPORTS UFC game,” said Gustafsson. “I want to thank all my fans who tirelessly campaigned and voted for me. I am proud to have the support of not only my home country, Sweden, and Europe, but also from people all around the globe. This is a huge win that motivates me to become the best light heavy weight fighter in the world.”

“This was a great way to engage fans and we are excited that they selected Alexander Gustafsson as the Cover Vote winner,” said Dana White, UFC President. “Europe accounted for nearly 40% of the web traffic to the Cover Vote during the last week of voting. This overwhelming support from UFC fans in Europe is indicative of the sport’s rapidly growing popularity around the world and especially in EMEA. I couldn’t be more excited about the UFC game and the work that the team at EA SPORTS has done.”

As part of the MetroPCS EA SPORTS UFC Cover Vote Sweepstakes, one lucky fan who voted will have the chance to be part of Gustafsson’s entourage when he walks out at one of his next fights. Fans are encouraged to check out the MetroPCS Facebook and Twitter to get behind the scenes access to the winner’s experience.

Powered by EA SPORTS IGNITE technology, EA SPORTS UFC brings the action, emotion and intensity inside the Octagon to life in ways that were never before possible. The next-generation of True Player Motion not only showcases the diverse, powerful and fluid attacks of elite mixed martial artists through Precision Movement, Dynamic Striking and Strategic Submission Battles, but also brings the combatants to life with Full Body Deformation and Real-Time Exertion. The simulation of Human Intelligence takes leaps forward with the strategic and adaptive MMAi system and is expressed through the most realistic characters ever created in a sports game.