"I need to be at my absolute best and as sharp as I can be in order to be able to continue on this schedule that I’ve been on." - Jon Jones 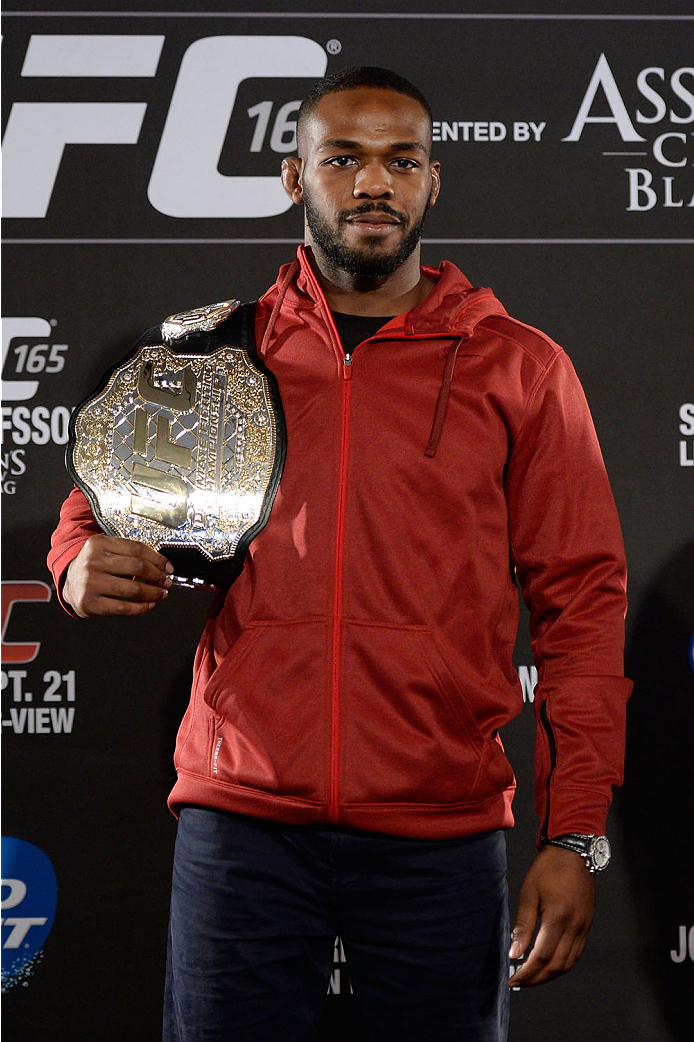 If combat sports fans don’t feel spoiled at the moment, they should. Last week, the best boxer of this era, Floyd Mayweather Jr., delivered another master class in scoring a decision win over Mexico’s Canelo Alvarez. This Saturday, mixed martial arts’ best pound for pound, Jon Jones, defends his light heavyweight crown against Sweden’s Alexander Gustafsson in the main event of UFC 165.

It’s one of those back-to-back weekends when no matter the final outcome, it’s a chance to watch someone do what 99.9% of the world can’t. That doesn’t mean Gustafsson can’t clip Jones with a left hook, catch him in a guillotine choke, or do something else that would shake up the MMA universe much like Chris Weidman did in his July win over Anderson Silva. But entering Saturday’s bout at the Air Canada Centre, Jones, like Mayweather before him, is the focal point, the seemingly unbeatable force, the puzzle yet to be solved.

Just being able to watch someone like that in action and in his prime is a joy. That’s from the outside though. What does someone like Jones see when he watches Mayweather?

“I thought he looked phenomenal, just the epitome of the word champion,” said Jones. “I see Floyd out there having fun, and I think that’s awesome that he’s such a clean athlete. He doesn’t drink, he doesn’t smoke, and he just appears to do things right. He’s a hard worker and that can’t be denied. For him to be almost 40 years old and still be so dominant, it lets me know that I can do it too, that I can continue to do great things and that the luck doesn’t run out for those who work hard and continuously apply themselves.”

It’s the only secret to staying on top, and one that really isn’t a secret. Throughout combat sports history, it’s usually those that lost the hunger, neglected training, or didn’t respect their foes that fell from their perches before their time. Sure, age catches up to everyone, but when you’re 26 years old like Jones, the biggest opponent isn’t the one he meets on fight night, but himself. And at this point, he’s not letting the man in the mirror get in the way of what he wants to do in this sport, which not only includes dispatching Gustafsson, but gaining the record for most successful UFC light heavyweight title defenses all for himself with a win, and going on to set even more marks in the coming years.

“What motivates me is just studying my opponent and seeing those glimpses of greatness that Alexander possesses,” said Jones. “That’s what keeps me motivated, keeps me on fire, and keeps me training really hard, realizing that anything can happen and that I need to be at my absolute best and as sharp as I can be in order to be able to continue on this schedule that I’ve been on.”

Maybe Silva’s shocking loss to Weidman was a reminder to Jones that in this game, one second’s loss of focus could end a fight. He knows it from his last visit to Toronto in September of 2012, when he got caught in a tight armbar by Vitor Belfort in the first round. Jones refused to tap, escaped, and went on the win in the fourth stanza, but it was a lesson to be learned that at this level of the sport, everyone’s dangerous. And Gustafsson’s no exception. Jones knows it too, but when asked about his tape watching habits for the fight, he refers to the worst night of the Swede’s professional career.

“Phil Davis (who handed Gustafsson his only pro loss via submission in 2010) didn’t use any devastating technique or any really, really clean wrestling,” said Jones. “He went out there and made it a dogfight, implemented his will completely, and stole Alexander’s soul in under five minutes. Alexander tapped out after the 10 second bricks had been clapped, and Gustafsson’s soul was taken before that choke was even locked in. If you hear the ten second signal, you don’t tap out, no matter what. Phil had the actual squeeze on for two seconds and he tapped. That let me know that his soul was taken, and if he gives up once, I can’t see why I can’t make him give up again.”

So is Jones now in the soul stealing business?

It’s been said that Mayweather’s greatness has only a small part to do with his physical and technical gifts. The rest has to do with his brain, both as a tactician and as a master of psychological warfare. Jones is getting to that point too, finding his foe’s weaknesses long before they touch gloves to fight, and when they do fight, coming up with things that can’t be countered or prepared for, only because they’re being done on the fly. And with that on your side, it is conceivable that Jones could stay on top for as long as he wants to. Take away the controversial disqualification loss to Matt Hamill, which no one really considers a defeat, and could Jones do a Mayweather-esque run of 17 years unbeaten?

“17 years?” chuckled Jones. “I wouldn’t want to do it for that long, but I can see myself doing it for a long time, and my goal is to remain undefeated and really go out on top.”

He may just do it, despite hungry challengers like Gustafsson and Glover Teixeira knocking on his door and Daniel Cormier looming in the distance. And while it’s a tough task to say the least, especially in the UFC, and especially when – as middleweight boxing great Marvin Hagler once said - ‘it’s hard to do roadwork in the morning when you’re wearing silk pajamas,’ Jones’ talk is never about money. It’s about his future standing in the sport.

“I think it’s really important to have goals that have nothing to do with the financial side of things,” he said. “Right now I’ve gotten to a point financially that I never thought I’d be at, and I don’t think it’s changed who I am as a person at all, and that tells me that maybe I don’t necessarily do this because of the money. I do it because of the way it makes me feel, to be the best in the world at something and to be able to pursue excellence and be a better version of yourself. Things like that make you feel good and always give you a reason to improve in life. That’s what fighting’s done for me – it’s given me a way to be better.”

With that kind of focus, talent, and skill, who would you pick to beat him?