It's 'Do Or Die' For Charles Jourdain

It’s been a long couple of years for talented French-Canadian featherweight Charles Jourdain, who makes his third appearance of 2021 on Saturday night against Andre Ewell.

Arriving on the big stage with a ton of hype after amassing a 9-1 record on the regional circuit and claiming championship gold in two weight classes with Quebec’s TKO promotion, Jourdain stumbled in his debut at lightweight against Desmond Green but made a splash upon returning to his natural weight class, venturing to Busan, South Korea and collecting a second-round stoppage win over “The Korean Superboy” Dooho Choi.

Entering last year with a ton of momentum, he struggled through the first winless year of his professional career, dropping a split decision to Andre Fili in June before battling Joshua Culibao to a split draw result four months later. After getting back into the win column with a victory over Marcelo Rojo to begin his 2021 campaign, a late shift in opponents in September landed Jourdain in a catchweight matchup with veteran Julian Erosa, who used his long arms to lace up a third-round D’Arce choke.

“People say, ‘Next time it’s going to be good,’ but me, I’m hard on myself,” said Jourdain, who carries an 11-4-1 record into his fight with Ewell on Saturday night. “I’ve been questioning myself after the Julian loss and, of course, people say a lot of things trying to console me, but I need to go through that all by myself.

“I’m not unsatisfied by the performance; I’m unsatisfied by the result,” continued the thoughtful and engaging 26-year-old. “He caught me with those long arms — I didn’t expect that from the position we were standing in. He didn’t have my back, he didn’t have nothing, and he just jumped on my neck from so far away. I never expected that to get sunk in, so fair play to him.

“Every time I’ve lost in the UFC, the guy has had 30-plus fights,” added Jourdain. “Experience plays a huge factor and I think I got intimidated by that. It was the first time that arriving for fight week, I was asking myself, ‘What am I doing here?’ to a point where I didn’t want to be there.”

Part of what was weighing on Jourdain was the stress and strain stemming from the myriad changes and delays he’d dealt with throughout the year.

He was originally scheduled to face Steve Garcia in March, but three weeks before the fight, the New Mexico native withdrew and was replaced by Rojo. After securing that victory, he was paired off with unbeaten British up-and-comer Lerone Murphy, first for a bout in August, and then for September.

Erosa tagged in for “The Miracle” just 10 days before the bout, and while shifting dates and shuffling of opponents is par for the course in this sport, especially in the current climate, they’re hazards that no fighter wants to encounter on the way to the Octagon.

“Mentally, I was very fatigued,” said Jourdain, who admitted he was riding high following his win over Rojo and eager to share the cage with Murphy, who eventually fought Makwan Amirkhani at UFC 267, registering a second-round knockout win. “We got back in camp and then they postponed for one month, and then it was one month again, so it was a very grueling camp; very intense on the mind and the body.

“When I arrived, the opponent switched — ‘Okay, you were fighting a striker, now you’re fighting this six-one guy that is very different’ — but I was happy I had a fight. I was like, ‘Let’s have fun. I’m in the UFC. Let’s do it.’ Then I didn’t get my hand raised and it was really hard on my mind.”

In the time since that loss, Jourdain has been working to find ways to better navigate the ups and downs that come with competing at the highest level in the sport, trying to keep work from impacting life at home, and finding ways to remind himself that his results inside the Octagon don’t have to control how he feels about himself either.

“Coming back off a loss, everyone around me doesn’t have to suffer,” said Jourdain, explaining the work he’s doing to not allow frustrations and disappointment from his professional life to spill over and impact his personal life. “They don’t have to because it’s not about them — it’s all about me — and if I want better results, I need to work harder.

“When you win, your attitude must stay the same or get better. Sometimes you win and you think you’re the king of the world, but you’re just a human being. If you lose, it doesn’t make you less of a man, and if you win, it doesn’t make you more of a man. At the end of the day, you are how you treat other people and how you conduct yourself, more than what you achieve. 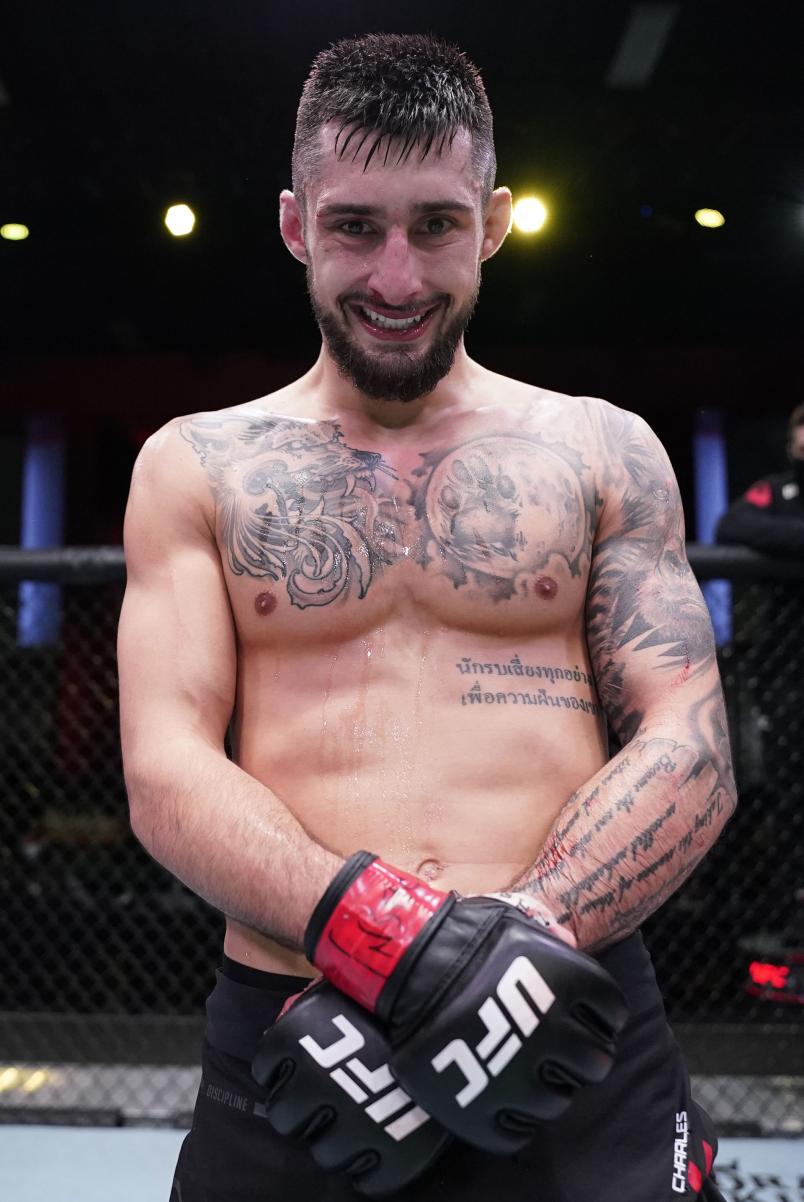 Charles Jourdain reacts after his victory over Marcelo Rojo of Argentina in a featherweight fight during the UFC Fight Night event at UFC APEX on March 13, 2021 in Las Vegas, Nevada. (Photo by Jeff Bottari/Zuffa LLC)

“I was asking myself, ‘If you had a million dollars right now, what would you do?’ Of course, I would sleep in a much more comfortable bed, but I would wake up, go to the gym, have fun with the guys,” he said with a laugh. “There are so many things that I’m grateful for, and my attitude doesn’t change.”

Heading into Saturday’s final event of the year, he’s grateful to be facing a fellow striker, at least in theory.

“In theory, because every time I think that, they go for my legs right away,” he said of the pairing with Ewell, who has teased a move to featherweight for some time and finally makes the jump after missing weight ahead of his loss to Julio Arce in July. “I’m very happy about that matchup — he’s a lanky fighter; not great cardio, but great explosiveness. He has great hands, and when he’s hurt he has a tendency to smile and make you think that you didn’t hurt him, so I need to be aware of that.

“It’s a very nice matchup; I’m very happy about it,” he added. “I just hope there is no injury one week before and I have to fight someone else.”

Provided the matchup remains in place, Jourdain offered a single word forecast of what to expect on Saturday night — “violence” — because in addition to entering off a loss, he’s also rolling the dice by stepping into the Octagon on the last fight of his contract.

“I’m playing with my job right now because I decided to do my fourth fight on the contract,” he said. “He doesn’t engage too much; he backs away and likes to hit you and go back. I hate that style — I like people that like to trade — so I have to pressure him, but we’re in the small Octagon, so that benefits me in the striking department.

“It’s going to be about damage,” he continued. “Plus, after my fight, I’m going to watch Cub Swanson fight Darren Elkins, so I need to be in shape for that, because that’s going to be intense.”

He cackled at his comment, clearly in good spirits, eager to get back into the cage and secure his future.

“I’m going in there and playing with my job,” he added. “It’s do-or-die and I’m going to be in his face. After this, I will be a free agent, so you have to expect violence.