It's The Destination, not the Journey for Pena 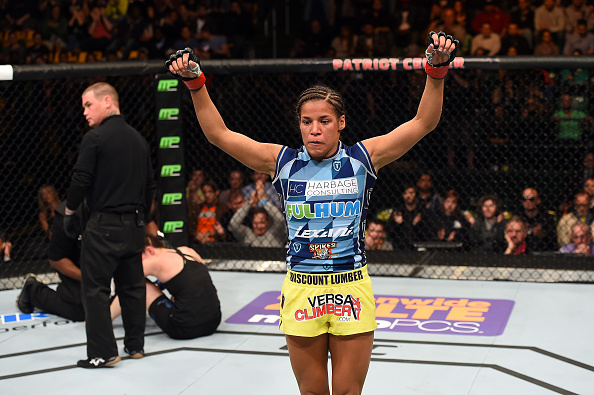 A little more than 16 months is a long time to be on the sidelines for an athlete in her prime. Serving that sentence due to a knee injury is even more stressful when your sport is mixed martial arts. But Julianna Pena wasn’t worried if her knee would hold up for a 15-minute fight as she prepared to face Milana Dudieva in April.

She had more pressing concerns.

“Do I remember how to fight?” she recalled thinking that morning in Fairfax, Virginia. “Am I going to be able to get in there and still do what I was doing before? That’s what I was nervous about.”

Pena won her fight – and quite spectacularly at that – halting Dudieva in just under four minutes, earning Performance of the Night honors in the process. So when did she know that everything was going to be all right?

“When I won, and when the ref was shoving me off of her and they raised my hand.”

She laughs, bringing back memories of the day when she got her career back. Pena did win The Ultimate Fighter 18 season title in her previous fight in November of 2013, defeating Jessica Rakoczy in the first round. But this was different. And it was probably better in many ways.

“It was an amazing moment,” she said. “It almost feels like it’s a dream when you’re in there. Everything slows down and it’s kind of a blur. And then you think about what you want to say and then you don’t ever say the right thing and then you get mad because you didn’t say what you were planning on saying. There’s so much going on and it goes so fast, but I was just so happy.

“Everyone always says ‘oh, you’re so excited about your fight,’ and I always say I don’t get excited to get in fistfights,” Pena continues. “It’s a scary thing. But after, when I get the win, I’m the most excited person you’ve ever met. I look forward to those moments and they’re what really makes competing in this sport ultra special.”

At least for a while. In those heady days after a victory, Pena is on top of the world and smiling from ear to ear. When it’s time for a fight, the mood changes. Sure, she is still one of the most engaging personalities in the UFC and quick to joke about the mispronunciation of her first name (it’s Julie-ahn-a) or the outright butchering of it, but when it comes to her day job, she’s not one of those folks who looks forward to training camp or the idea of fighting someone for 15 minutes or less.

It’s brutal honesty, the kind you rarely get these days.

“That’s why it takes me so long to get back in the cage all the time,” she said. “A six-month layoff? I’m fine with that. ‘I’m still living off the Ultimate Fighter money. You guys go ahead, I’ll be over here.’ (Laughs) But at the same time, I just wait for the call and when they tell me it’s time to go to work, then it’s time to go to work. That, in itself, usually gets me pretty motivated. I get pretty offended when a girl thinks she can beat me or run right through me, and that challenge makes me have a fire lit underneath me and from there I’m in non-stop work mode. It doesn’t take a lot to get me fired up.”

And that’s why Pena is amped up for Saturday’s UFC 192 bout against Jessica Eye. It’s not a fight just to stay busy or pick up a paycheck. With Pena at number 12 in the bantamweight rankings and Eye at six, a win doesn’t just skyrocket “The Venezuelan Vixen” into the top ten; it likely puts her in the title conversation. It’s a conversation the 26-year-old from Spokane is not shy about inserting herself into.

“Everyone wants to say that those fights on The Ultimate Fighter didn’t count, but to me, I remember them being real fistfights and I remember beating everybody that they put in front of me,” said Pena, who decisioned Gina Mazany and submitted Shayna Baszler and Sarah Moras on TUF 18 before stopping Rakoczy in the finals. “So in my eyes right now, I’m 5-0 and after I beat Jessica I’ll be 6-0. The only one that’s 6-0 (in the UFC) is (135-pound champion) Ronda (Rousey), and I haven’t been talking trash, beating people on The Ultimate Fighter that didn’t even get past me like Jessamyn Duke and Shayna Baszler, bulls**tting my way to a title shot like Bethe Correia did. I’ve earned every step of the way up this ladder and that’s the way that I prefer it to be. I don’t expect anything to be given to me. So that’s the only thing that makes sense to me. The only thing left for me is to be fighting for a title. I didn’t get into this sport to be at the bottom of the rankings. I got in this sport to prove to the world that there’s no other female out there that is harder than me, mentally or physically, and that I’m the best female fighter in the world. If I was not going to get a title shot after a win, then it would be pretty frustrating. However, I don’t like to look too far into the future like that, and I like to keep my eyes, my mentality and my focus on Jessica Eye because I know that she’s coming in there and she wants to take my head off my shoulders and she’s looking for revenge. I gotta get past her first, and that’s first and foremost the only thing that I’m focusing on right now.”

For someone focused on the task at hand, that’s a pretty damn good look at the future.

“I’m just talking hypothetically,” she said. “But it my eyes that’s the way I see it playing out, and that’s what I would want to happen.”

She will be in tough with Eye, who many believe was one win away from a shot at Rousey before losing to Miesha Tate earlier this year, and as a durable veteran, Pena might not be able to blitz her and dismiss her like she has other foes. Pena knows she’s in for a fight, but it’s one she gets done with early.

“I usually get in there and have the same game plan as always, and that’s to try and get the fight finished as fast as possible and do as much damage as possible before they have the opportunity to do anything to me,” she said. “So I know that Jessica’s a very tough and durable fighter, but I’m gonna try to go in there and do everything in my power to make it hard on her.”

And then the celebration can begin again. That’s what Pena is fighting for – the destination, not the journey.

“I enjoy the ride a hundred and ten percent after I get my hand raised,” she said. “Until then, it’s hell. I feel like I have to go through hell and back for every single camp. I go through so much emotionally and physically, and so it’s not fun for me to be in that high pressure situation. But when it’s all said and done, oh man, I enjoy the ride more than ever. I love it.”