It's Bryan Barberena's Time To Shine

Bryan Barberena has been wanting to fight Rafael Dos Anjos for eight years, dating back to the night the Brazilian veteran knocked out his teammate and close friend Benson Henderson in Tulsa, Oklahoma in the summer of 2014.

For me, it was always, ‘If he doesn’t get a chance to get this back, hopefully I do one day,’ and now’s the time,” said Barberena, who cornered Henderson that evening and meets Dos Anjos on Saturday night in Orlando. “Eight years in the making. It’s a full circle moment.

“I feel like these last few fights have been full circle moments for different times in my life, and here we are with another one. It’s time to really go out there and shine, and really close out that circle.”

Saturday’s co-main event clash with Dos Anjos is not only a chance for Barberena to move to 3-0 this year and extend his overall winning streak to four, but it’s also an opportunity for the 33-year-old to continue his ascension in the welterweight division, one that seemed highly unlikely just a couple years ago, when “Bam Bam” was facing a very different fight. 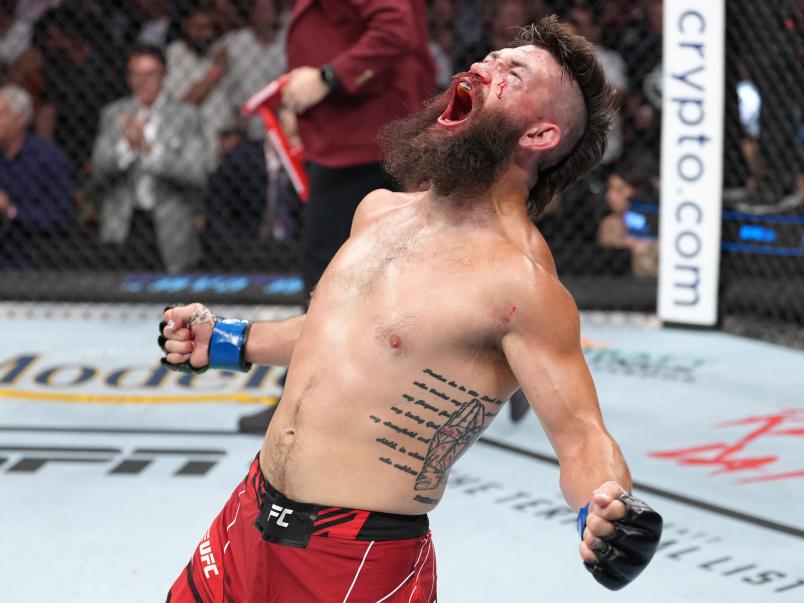 Bryan Barberena reacts to his win over Robbie Lawler in a welterweight fight during the UFC 276 event at T-Mobile Arena on July 02, 2022 in Las Vegas, Nevada. (Photo by Jeff Bottari/Zuffa LLC)

“It’s been absolutely amazing; I’m truly blessed,” he said of his run of success and emergence as a divisional dark horse, which has come just a couple years after Barberena underwent life-saving emergency surgery after suffering serious internal bleeding stemming from a seemingly innocuous body kick in training. “I got a second chance at life, a second chance at continuing to fight. I didn’t know if I was going to be able to fight again, but I came back, lost, but won in the sense that I got to continue to do what I love and support my family that way.

“Since then, I’ve gone on a streak and gotten to face these guys that I’ve wanted to fight forever - that I’ve watched fight, guys that have been at the top of the division - and done big things.”

After dropping his return bout against Jason Witt in a Fight of the Night-winning contest in the summer of 2021, Barberena returned at the end of the year and got back into the win column with a hard-earned victory over Darian Weeks.

In March, he ventured to Columbus, Ohio and edged out Matt Brown in his own backyard, collecting another Fight of the Night bonus. A little over three months later, Barberena joined the short list of fighters to garner a stoppage victory over former welterweight champion Robbie Lawler, with the duo garnering Fight of the Night honors at UFC 276.

It’s the most sustained run of success Barberena has enjoyed over the course of his eight-year, 15-fight career inside the Octagon, and the father of three is very clear about why things have really started to click for him this year.

“I had been traveling for a while — traveling for camps, being gone all week and being home on weekends with my family — and, for me, being with my family makes me better,” said the man who allows his children to pick his walkout tracks. “The Matt Brown camp, we moved the family to North Carolina.

“I’m home every night. I get to be with them every single day, and that has made me alive,” he added. “Having them around, having them be a part of my life — just being there, being with them daily — had brought back a sense of fire inside of me. Having them close, that’s when you get the best me.”

While Barberena has been at his best so far this year, he knows that same effort is going to be needed to continue this run of success and claim a victory over Dos Anjos on Saturday.

“He’s been champ, continually getting in there and fighting at the top in two weight classes,” he said of his Brazilian foe, who carried the lightweight title and fought for the interim welterweight belt over the course of his distinguished career. “He’s dangerous everywhere. I knew Robbie probably wasn’t going to shoot a takedown; he was going to stand there and try to take my head off the entire time, and I was going to do the same. With RDA, he’s a master with mixing it up — striking, jiu jitsu; he’s good everywhere and very dangerous everywhere.

“It really excites me because this is a test I want and something I want to show. This is a fight that shows my ability and takes it to the next level — that I can do more than just strike; that I can be dangerous everywhere and that I can go and beat them in those areas. 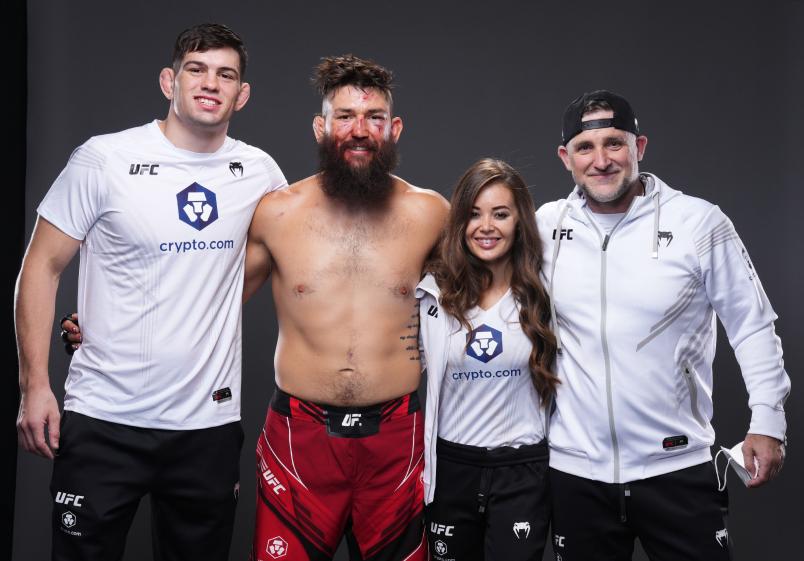 Bryan Barberena and his team pose for a portrait after his victory during the UFC 276 event at T-Mobile Arena on July 02, 2022 in Las Vegas, Nevada. (Photo by Mike Roach/Zuffa LLC)

“I’m eager to show that I’m ready for the test.”

He’s also eager to go out there and try to collect a Performance of the Night bonus for the first time in his career.

“I’m eager to show that I can do that, so that’s a goal of mine. I want to go out there and put on a performance.”

Accomplishing that goal would mean that Barberena would head into the holidays with a third win this year and riding a four-fight winning streak, adding to his “dark horse” status heading into the new year.

And while he might not have been someone fans or fellow competitors initially viewed as a potential contender in the 170-pound weight class, that’s exactly what Barberena will be with a victory this weekend.

“To end the year 3-0 would be incredible for myself, my career, my family, but it also makes a statement for the UFC and the other competitors to chew on because I’m here,” he said. “Who’s to say this isn’t my time for a run?”