It's Always Showtime for Johnny 'Hollywood' 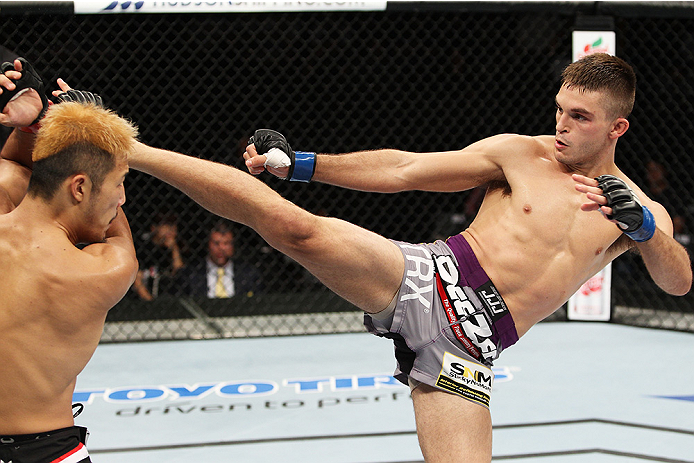 Despite his moniker, Johnny “Hollywood” Case is about as far removed from Tinseltown as you can get. Sure, he’s a showman on fight night, able to finish a fight in the blink of an eye and add another clip to a growing highlight reel. But at his core, the 25-year-old is all Midwest tough, a trait he has had to dig up several times over the years.

“I’ve had some gritty fights,” he said. “I once had a fight where I broke my hand the first punch I threw and it ended up going three rounds. I broke my foot in that fight as well. So I’ve been in fights where I had to dig deep and work through some adversity just to get the job done. Of course I’d rather go in there and finish the fight in 30 seconds and come out unscathed, but at the same time I embrace the challenge. There’s something almost spiritual about that feeling and it’s something you will never get to experience in any other form of competition. I respect that, and every now and then I kind of look forward to that.”

But the toughness of the father of two boys really came into play last June, when he got his dream call from the UFC to make his debut against Joe Ellenberger. Yet while undergoing pre-fight medicals, it was discovered that he had a torn retina. Case wanted to fight with it and worry about surgery afterward, but that wasn’t going to happen.

“I wasn’t even going to get the surgery right away,” he said. “I was going to not say anything, fight, and just take care of it after the fight because it wasn’t really bothering me.”

That’s not the “toughness” part. That came after the surgery to repair the tear, when he was told that he might not fight again.

“They said there could be a chance it (the eye) could become even weaker and happen again, only worse,” he said. “So there was a good week or so where I was really down and really contemplating if it was something I could do and recover from, and luckily everything looked good, I recovered well from the surgery and it was on the up and up from there.”

That’s now. But for that week, Case had to do some hard thinking, not about a fighting career, but about life.

“It was a very scary feeling, just the not knowing,” he said. “I knew I would be all right and it wasn’t something that was life threatening, so I was okay there, but when it came down to what I was going to do for the rest of my life, I didn’t know. Am I going to be living miserably, doing a job I don’t want to do for the rest of my life and wondering what would have happened had I not been injured. I had a good week of feeling sorry for myself and feeling down and I said ‘you know what? Life’s too short to be worried all the time. Let’s just hope for the best and do everything I can to better myself and still go forward with this.”

Given a clean bill of health and a new lease on his career, Case took his second chance and ran with it, delivering an exciting second-round submission win over Kazuki Tokudome in Tokyo last September. The victory earned Case a Performance of the Night bonus, and in the hour-long bus ride to the Saitama Super Arena, he pictured the fight going just like it did in reality.

“On the bus to the fight, I had this vision that I was going to rock him with strikes, and from the strikes I would set up the guillotine choke and that’s exactly what happened,” Case said, and finally, the Jefferson native had his first UFC win and a future.

“It’s a relief and it gives me more and more confidence,” he continues. “I knew from the training room that I definitely belonged in the UFC and could hang with top ten competition in the UFC. I just had to go out there and prove it to myself and prove it to everybody in the UFC and the fans. Having done that, and finishing a guy that hadn’t been finished in the UFC, it really gives me all the confidence in the world. I was the new kid on the block and granted, I still am, but now I feel like this is my home. It’s my backyard, the arena that was made for me. It’s not like I’m fighting on somebody else’s show; this is my show and I’m gonna go in there and take care of business. I don’t mess around. This is what I do for a living and I’m going to prove to everybody that I’m gonna do it well.”

This Sunday, he makes his second walk to the Octagon to face late replacement foe Frankie Perez. The New Jersey newcomer is Case’s third opponent for this bout, not an ideal situation, but hey, it’s the fight game.

“It’s been kind of a hassle, but then again it’s not really that big of a deal,” Case said. “It changed my game plan just a little bit. I was originally supposed to fight (Paul) Felder and I was expecting it to be a stand-up war, a dig down deep kind of gritty fight, and I embraced it. Then I ended up getting that (Francisco) Trevino kid and I couldn’t have been more confident. I thought for sure my style matched up so well with that kid. I don’t mean to sound cocky, but I felt really, really good that I was going to finish that fight and it could possibly be another Performance of the Night finish. Now I’m fighting a jiu-jitsu ground specialist, so it changed my style a little bit.”

The end goal remains the same though, and that’s to win and to finish. If Case pulls it off, it will be his tenth consecutive victory, a string of excellence that no one at 155 pounds could ignore. But in Case’s mind, this run didn’t begin back in January of 2011, but a year earlier when he lost to Derek Getzel (a defeat later avenged).

“That was the turning point for me,” he said. “I was 20 years old, it was a tournament, and the winner would have won a contract with Strikeforce. I ended up losing by TKO and I walked out of that fight unscathed, I didn’t get hurt at all. I was caught in mount, getting blasted on, getting elbows dropped, and I realized that getting your ass whupped really isn’t that big of a deal. It’s really not the worst thing that can happen to you. You go home, you lick your wounds, you heal up and you’re back in the training room by the end of the month. It really just showed me that you don’t have anything to worry about, that the danger was all in my head.

“There is no better feeling that Monday morning after the weekend of a really tough fight, knowing that you gave it your all and you came out on top, no matter what happened – broken nose, broken jaw, whatever,” Case continues. “You finished the fight and you didn’t stop because you were hurt or because it was getting hard.”