LAS VEGAS, July 6 – Singapore-based Brazilian Leandro Issa pulled out all the stops in search of victory against China’s Jumabieke Tuerxun in their TUF 19 Finale prelim bout and it worked, as he scored a last-round submission win in their back-and-forth bantamweight battle at the Mandalay Bay Events Center on Sunday.

Issa needed it too, as he trailed 20-17 on two scorecards heading into the final round, while he was even 19-19 on the third.

Tuerxun (17-2) took a while to get warmed up and into the fight, allowing Issa to take an early lead, but once the final two minutes commenced, “The Wolf” began landing power shots, rocking Issa twice with hard left hooks that forced the Brazilian to seek refuge on the mat.

Issa (12-4) jumped right back into things in round two, getting Tuerxun’s attention with some hard leg kicks. But upstairs it was all Tuerxun, as he continued to rip off his left hook with abandon. After the two went to the canvas, Issa grabbed the fence and was docked a point immediately by referee Mario Yamasaki, allowing Tuerxun to take matters to the feet again. There, Issa fought effectively down the stretch and nearly sunk in a guillotine choke before the end of the round.

Getting the takedown in the opening minute of the last round, Issa went after the guillotine choke with everything he had left, and Tuerxun fought just as hard to get loose and he did at the midway point. Issa remained in the top position though, and he fired off ground strikes from the mount until sinking in an armbar that finished the bout at 3:49 of the final frame.

Lee shot for the takedown immediately, but Ronson’s defense was solid as he fought it off and 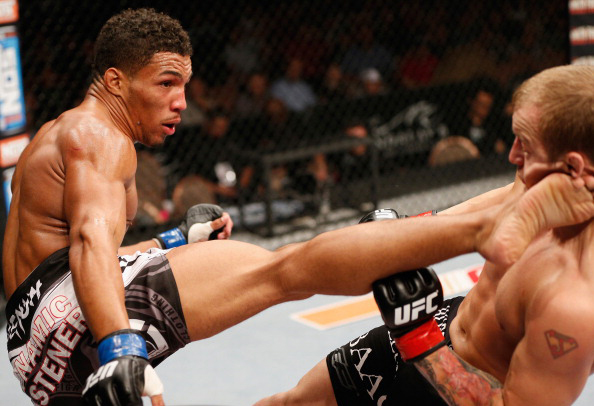 got back to the middle of the Octagon. A second attempt by Lee ended up with the same result, but the Detroit native was holding his own on the feet with “The Body Snatcher.” With a minute left, Lee was able to slam Ronson to the mat, but the Canadian got right back to his feet, only to get grounded once more before the horn.

Lead lefts from Ronson worked well for him in the opening stages of round two, but it was Lee’s grappling game that kept giving him trouble, as he was now having difficulty escaping the takedown. With 90 seconds left, the two stood and Ronson was again able to score. He even sought out his own takedown, but came up empty. It didn’t matter though, as he effectively used his striking game and avoided a late takedown attempt by Lee.

Ronson showed off his ground game in the final round, nearly sinking in a rear naked choke as the two battled on the mat, but Lee bounced back and then took Ronson’s back, but the Canadian fought free and got it standing again in the final minute, with the two trading hard shots at close range to the end of the bout.

Most believed that Brazilian lightweight standout Adriano Martins was a tough assignment for debuting Mexican prospect Juan Manuel Puig, and they were right, as Martins scored an emphatic first-knockout.

Martins’ right hand was an effective weapon in the first round, as he landed it repeatedly, but it was the left that stunned Puig (11-3) with less than three minutes remaining. Luckily for the Mexico City native, a low kick bought him some time to recover, but Martins (26-7) wouldn’t let him off the hook, with the right hand sending Puig down to the canvas face first, with referee Yves Lavigne stepping in to stop the fight at 2:21 of the round.

In a light heavyweight clash between TUF 19 competitors, Patrick Walsh’s wrestling was too much for Daniel Spohn, with the New Englander winning a three-round unanimous decision. 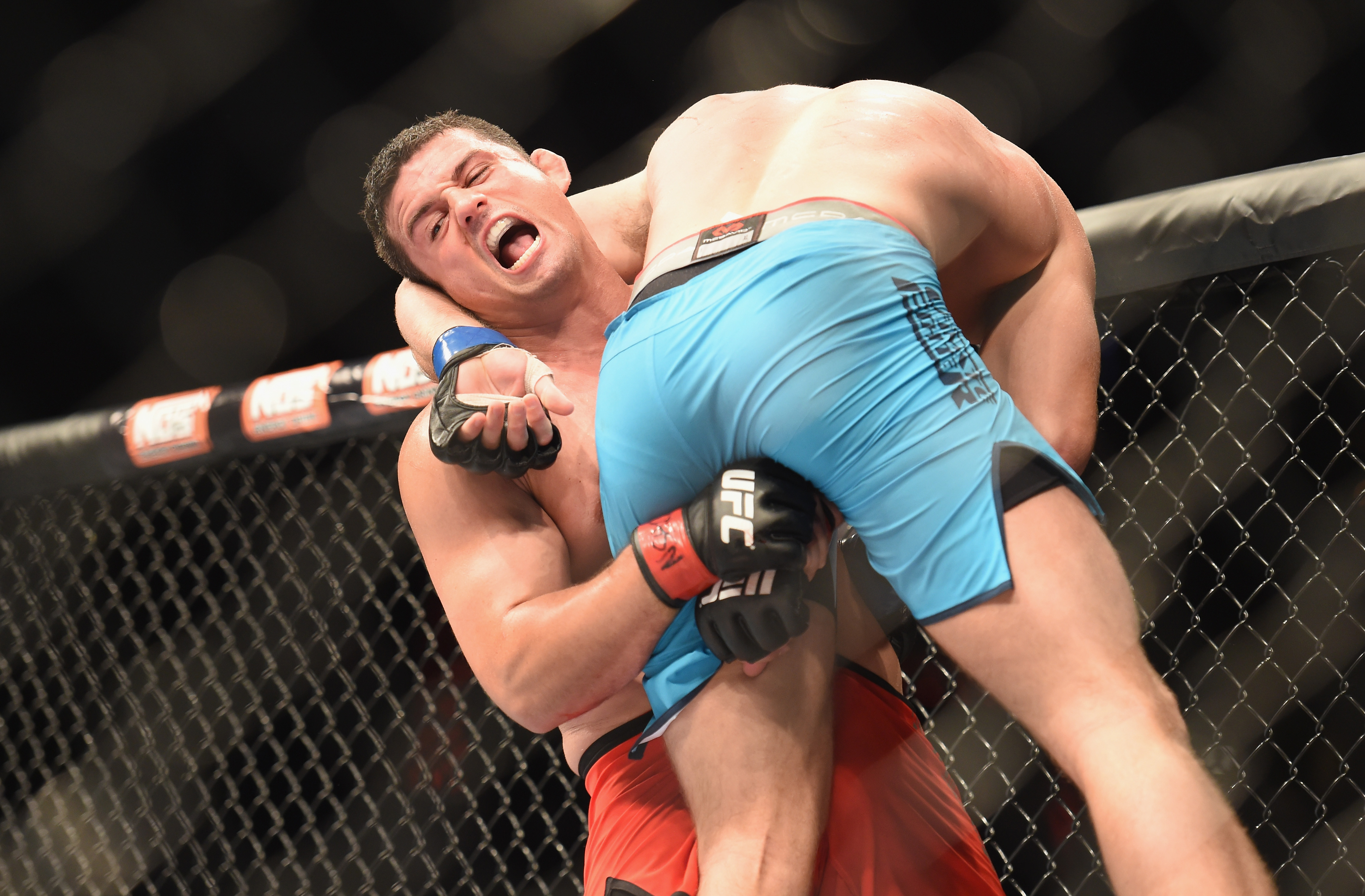 Walsh and Spohn traded submission attempts in the opening round, and before and after it was Walsh controlling his foe on the mat but being unable to pull away and hurt his foe.

After getting the fight to the mat early in round two, Walsh again searched for a kimura, but when Spohn broke loose he was able to scramble to his feet and get his bearings back. Walsh would get another takedown though, and he controlled the bout from the mat until the end of the round.

Finally able to get the distance to impose his striking game, Spohn had some success in the opening minute of the final round, but as soon Walsh got within grappling range, it was back to the mat. After a stalemate with just over a minute to go, referee Mark Smith restarted the fight and Spohn began teeing off on his now bloodied foe. The crowd rooted the Ohio native on, but it was Walsh finding a way to score the takedown once more.

The Ultimate Fighter season 18’s Sarah Moras made her long-delayed UFC debut after a layoff due to injury, and it was a successful one, as she outworked fellow debutant Alexis Dufresne en route to a unanimous decision win.

Moras did well in an opening stand-up exchange with Dufresne, but once the bout got to the 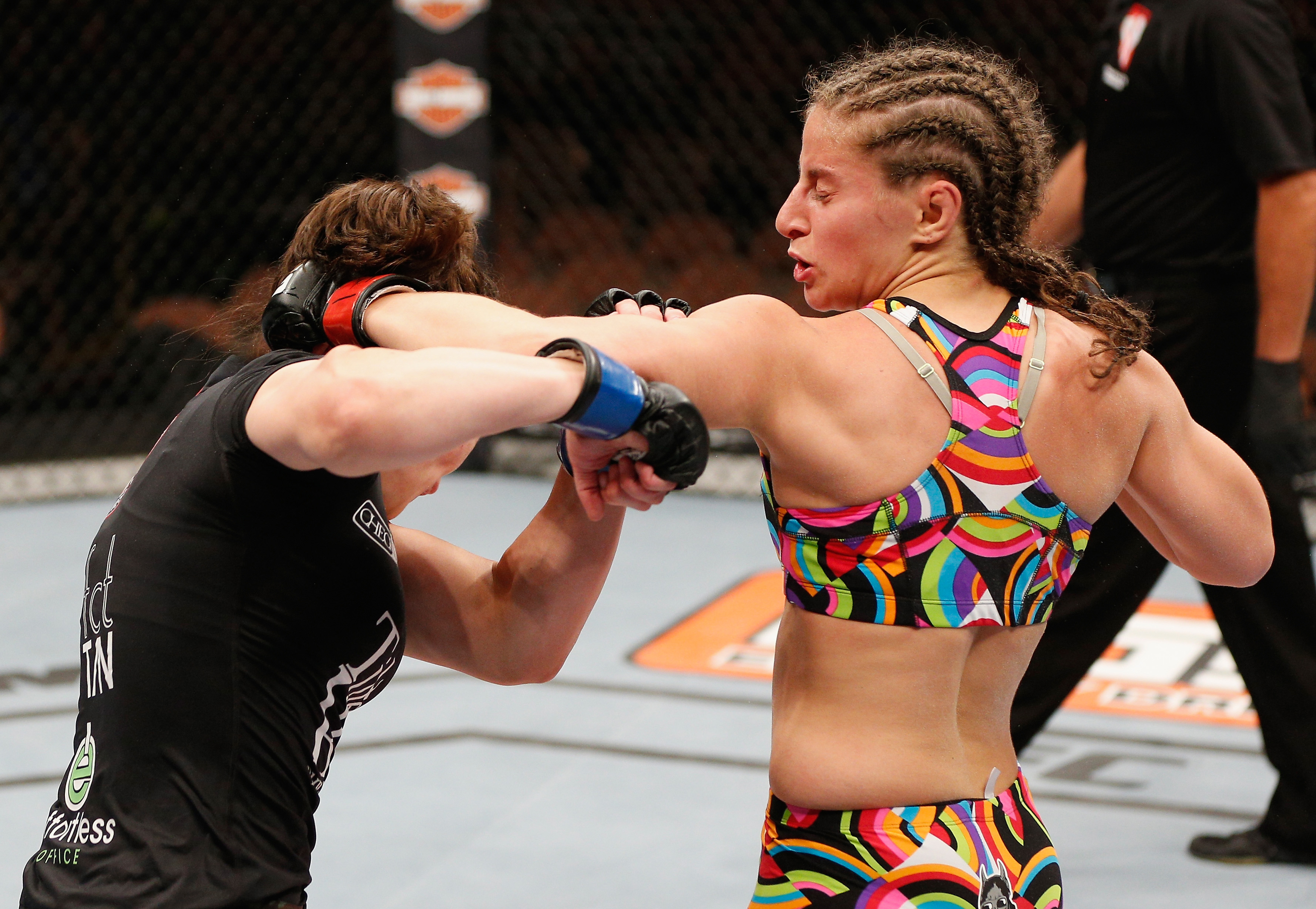 canvas, Dufresne went to work, firing off thudding knees to the body as she looked to improve position. Moras remained competitive as she threw strikes from her back, but she was unable to get free by the time the round ended.

Coming out throwing bombs, Moras looked to keep the fight standing in round two, but Dufresne was again able to take her down and control position. With 3:25 remaining, referee Yves Lavigne stood the fighters, and this time it was Moras scoring the takedown. After another stalemate, Lavigne restarted the fight again with 90 seconds left, but the two went right back to the mat, Moras winding up in the top position after a scramble, and Dufresne doing the same thing just before the horn.

The action on the mat stalled in the final round, with Dufresne on top but not doing much. When Moras got some daylight she looked for submissions and landed a couple upkicks, and though she was unable to turn the tide positioning wise, her activity level secured the win.

The bout was held at a catchweight of 143 pounds.

Las Vegas submission wizard Robert Drysdale lived up to his reputation in the light heavyweight opener, finishing off fellow UFC newcomer Keith Berish in the first round.

Drysdale wasted no time getting the fight to the mat in the opening minute, and from there, he worked to get his opponent’s back and the choke. Berish was game as he worked to break loose, fighting his way to his feet, but as the rear naked choke got deeper, the two fell back to the mat. Berish apparently injured his knee on the fall, with the tap out coming moments later at the 2:03 mark.