Israel Adesanya Focused On Showing Up, Showing Out

"The Last Stylebender" Aims To Add To His Already-Decorated Resume Against Jan Blachowicz And Add Another UFC Title.
By E. Spencer Kyte, on Twitter @spencerkyte • Mar. 5, 2021

Israel Adesanya doesn’t speak about his career in the same familiar terms as most of his contemporaries.

His points of reference aren’t other fighters or iconic moments that transpired in the Octagon. He doesn’t talk about his trajectory in terms of the next man ahead of him in the pecking order or naming the competitors standing between him and another historic achievement.

He speaks in terms of the “Choose Your Own Adventure” books everyone read as a kid and parallel timelines that make you think about comic book multiverses and Dr. Strange. He ties his movements inside the Octagon to his dance background, frequently pays homage to his love of anime, and refers to himself as “Player One,” a nod to both enjoying video games and the way he sees himself navigating his mixed martial arts career.

“I have no expectations, to be honest,” said the middleweight champion ahead of this weekend’s venture to light heavyweight, where he faces current champ Jan Blachowicz in the main event of UFC 259. “Expectations can hinder you sometimes because life has other plans, so you have to be able to just go with the flow, roll with it. I don’t have any expectations other than to show up and be myself; that’s the only expectation I have.

“This might sound crazy, but I don’t expect me to win,” added Adesanya. “What I’m expecting is myself to be my best and to show up as me, and when I do that, guess what? I’m the best in the world.

The reason Adesanya is standing on the precipice of making history as the fifth fighter to hold UFC titles in two weight classes simultaneously — and the first to do so while sporting a perfect record inside the cage — is because through his first nine UFC appearances and each of his 20 mixed martial arts bouts thus far, the 31-year-old Nigerian-born, New Zealand-based standout has done nothing but show up and show out.

It’s still difficult to comprehend how impressive Adesanya’s express trip to the top of the UFC middleweight division was, and how his first year as the ruler of the 185-pound weight class only further cemented his standing as one of the greatest fighters in the sport today.

In the span of 20 months, the City Kickboxing representative went from making his promotional debut at UFC 221 against Rob Wilkinson to knocking out Rob Whittaker at UFC 243 to become the undisputed middleweight champion. Along the way, “The Last Stylebender” collected victories over Marvin Vettori, Brad Tavares, Derek Brunson, Anderson Silva, and Kelvin Gastelum; four men currently stationed in the division’s Top 15 and the greatest middleweight of all-time.

He showed panache and precision, style and substance, finishing Brunson in the first round at Madison Square Garden and digging deep to claim the interim middleweight title with a gutsy fifth-round effort in his instant classic with Gastelum in Atlanta. 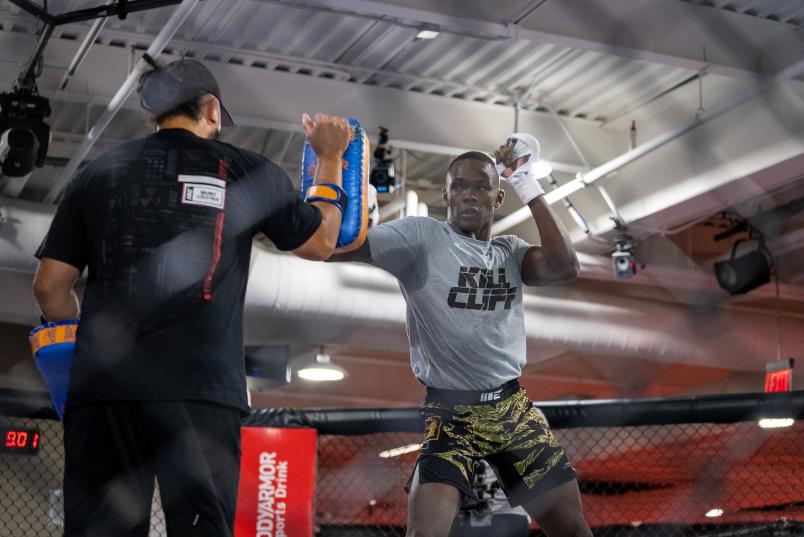 Once he unified the titles, he asked to face the boogeyman of the division, Yoel Romero, in his first defense, and after emerging with his perfect record intact, he backed up his promise to make it look easy against Paulo Costa by doing precisely that.

“I want my legacy to be the guy that fought everyone in his way and when they weren’t in my way, I went out of my way to fight some people, just so I could prove I’m the best,” said Adesanya. “When it’s all said and done, people can be like, ‘It’s a wrap. He’s the one. He’s the (greatest of all-time). You weren’t around in ‘The Stylebender Era,’ when he was calling out Romero when he ain’t have to, when he was dismantling people early in his career, when he jumped up to light heavyweight and f***** up Jan Blachowicz.’”

While pound-for-pound debates and arguments about who is “The G.O.A.T.” are always subjective and often more difficult than we want to allow, there is no denying that moving to 21-0 and holding both the middleweight and light heavyweight titles would put Adesanya on a very short list of the top talents of his generation.

And although more than a few eras in this sport have been far shorter lived than many anticipated, the potential for Adesanya to continue his three-years-and-counting run of unbridled success is there. 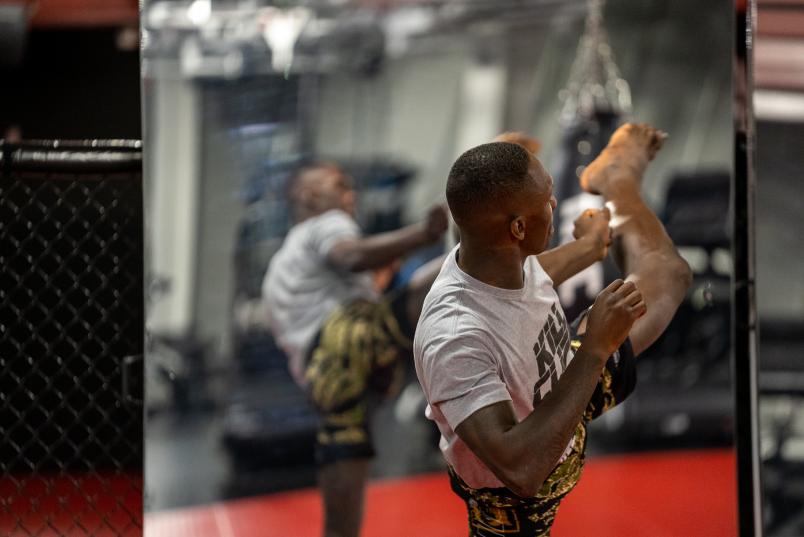 Entering Saturday night’s contest, Blachowicz has won four straight, and three of those victories — including his title-winning turn at UFC 253 last fall, on the same night Adesanya dispatched Costa — have come by stoppage when the 38-year-old veteran from Cieszyn and fighting out of Warsaw detonated a thunderous hook on the chin of his opponents.

During his rise at middleweight, countless opponents suggested Adesanya was too skinny, too wiry, not strong enough to contend with the power brandished by the top talents in the 185-pound ranks and reach the top of the division, and now that he’s moving 20 pounds north to challenge Blachowicz, those same questions are being asked again, and the middleweight champion is exhausted by it all.

🏆 @JanBlachowicz vs 🏆 @Stylebender is TWO DAYS away.

“I’ve told you: there are levels to power, but everyone has power. You have all this power, but how are you going to deliver it to the target?” he asked. “People keep — it’s the same rhetoric. ‘Legendary Polish power’ — I hear that and I’m just like…”

Once again, Adesanya rolls his eyes and lets the force of it carry his entire upper body backwards over the chair.

This weekend’s light heavyweight title hopeful will be the first to acknowledge he enjoys showboating in the cage and exchanging barbs with opponents that want to mix it up verbally or via social media before trading blows in the cage, but he’s also backed up his boasts. 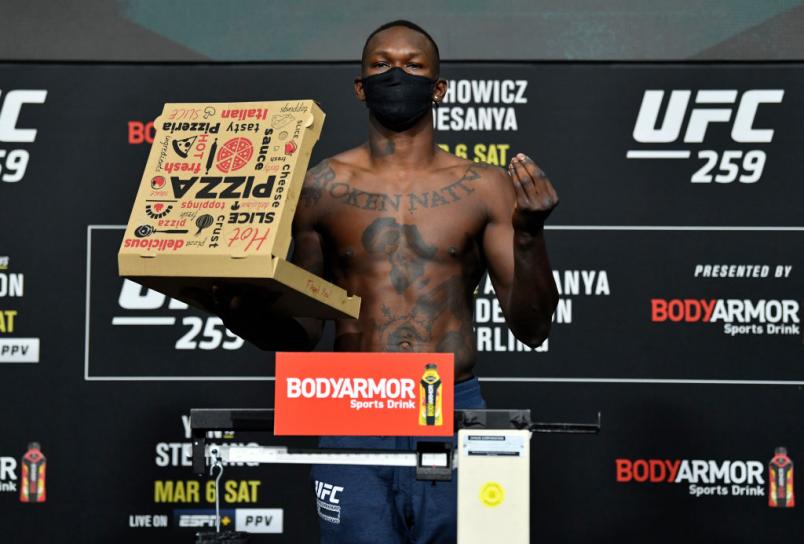 Israel Adesanya of Nigeria poses on the scale during the UFC 259 weigh-in at UFC APEX on March 05, 2021 in Las Vegas, Nevada. (Photo by Jeff Bottari/Zuffa LLC)

Thus far, through nine trips into the Octagon and 20 consecutive mixed martial arts appearances, Adesanya has ended every foray into the fighting theater standing triumphant in the center of the cage when the dust settles and the smoke clears.

And for the middleweight champion looking to make more history on Saturday night in Las Vegas, it all goes back to expressing himself to the fullest and his only expectation being to do his best when the Octagon door closes and it’s time to work.

“A lot of these guys are actors,” he said, referring to former opponents that had plenty to say in the build to their encounters, but offered little once it was time to follow through. “I said it — ‘theatrics.’ I feel people, I feel their energy and I know when you’re not about this life.

“Jan is definitely about that life,” he added. “He doesn’t have any games that he wants to play He wants the smoke, (but for a lot of people), it’s not real: you’re putting on a show and doing what you think you’re supposed do, rather than being authentically yourself, which is where I come in because I’m authentically myself.

“And when I’m authentically expressing myself, no one can f*** with me.”

Player One is ready.