Islam Makhachev is Just Getting Started 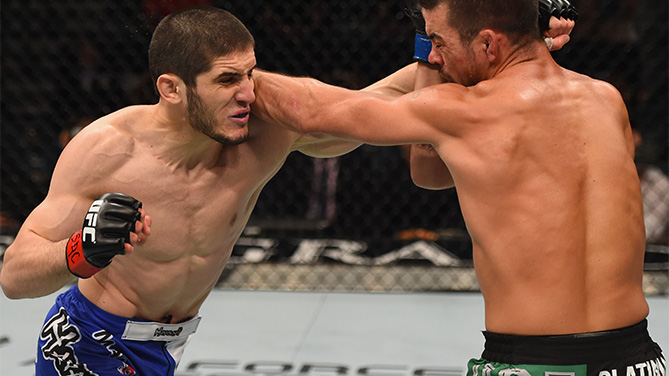 The caliber of hype and expectation attached to Islam Makhachev isn’t thrown around loosely in the current era of mixed martial arts. It is earned through the type of performances that signal much bigger things waiting on the horizon, and the 24-year-old Dagestan-born fighter has been nothing if not consistent in showing his abilities in live combat.

Before his arrival to the UFC back in May, the Russian powerhouse had collected a flawless 11-0 record competing on smaller stages around his home region. This string of victories made him one of the most highly touted prospects on the international scene, and being a close friend and training partner of fellow phenom Khabib Nurmagomedov only served to amplify the buzz surrounding him.

Makhachev made his official promotional debut against Leo Kuntz at UFC 187, and his second-round submission victory marked his arrival in impressive fashion. Much like “The Eagle” has shown during his rise up the lightweight ranks to become a certified contender, Makhachev worked a power-wrestling game until he was able to put Kuntz away with a rear naked choke to close out their tilt in Las Vegas.

Where the spotlight has wilted other buzzed about talents in the past, Makhachev thrived in the biggest moment of his career.

“I really didn’t feel any change coming into the UFC,” Makhachev said. “I know it is the highest level of the sport, but the competition is the only thing that matters to me. I’m going to continue fighting the same way I always have and fighting to win as I always have. I came into my first UFC fight planning to defeat my opponent and I did my best to accomplish this.

Furthermore, the rising young talent also flexed a versatile striking game that shows his overall skill set is growing as well. All of these things combine to make Makhachev a fighter to keep an eye on in the crowded 155-pound collective, and he plans to give fans even more reasons to believe the hype this weekend at UFC 192 in Houston, Texas.

The fighter who splits his training time between AKA in San Jose and KHK in Bahrain will face Adriano Martins in a UFC FIGHT PASS showcase bout, and he has every intention of keeping his momentum rolling against the Brazilian striker.

While Makhachev has his own personal goals of reaching the pinnacle of the lightweight division, he’s also a part of a larger movement on behalf of his native Dagestan. The past three years have seen a huge influx of Russian fighters burst on to stages around MMA, many of which have found homes on the UFC roster.

And even though there have been surges from numerous countries such as England in the mid-2000s and the shake-up that is currently coming out of Ireland on the heels of interim featherweight champion Conor McGregor’s meteoric rise to popularity, the talent coming out of the mountains of Dagestan seems to be limitless.

“There are a lot of great fighters coming out of Dagestan and I’m proud to be one of them,” Makhachev said. “Khabib has helped open the doors and I hope I can also help pave the way for other talented fighters to reach the UFC.”

All possess a signature brand of grappling and drive, but it’s Makhachev who has shown different elements of power in his game. He throws punches and kicks with the worst of intentions all the while keeping his stoic, stone cold demeanor intact. That’s a frightening combination for the opposition standing across the Octagon from him, and casts a sense that the undefeated lightweight is unbreakable in both the mental and physical aspects of the game.

Makhachev credits his focus to the preparation he puts in at the gym, and finishing up his camp at the American Kickboxing Academy in San Jose has him confident he’s ready to give his best at UFC 192 on Saturday.

“I have been feeling very good in my training,” Makhachev said. “I have been training all over the world and have done my recent training at AKA and I like that very much. They have the best fighters in the world there and they help me get ready to be the best I can when it’s time to fight. I’m feeling good and believe I am improving every day because of the hard work I put in.

“It is my dream to become a champion one day,” he added. “I am going to continue to work hard to become the best fighter I can be.”