"I want to earn my place. I’m not here to be a flashy guy. I’m not off a reality show. I’m here to fight." - Isaac Vallie-Flagg 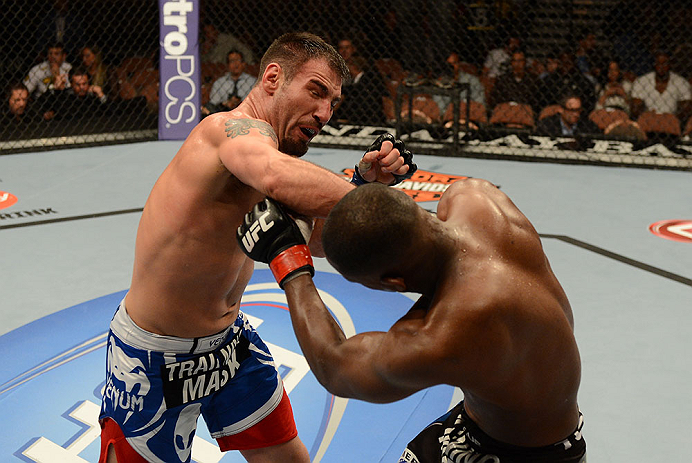 There is a feeling that comes with having the things you’ve been working so hard to set in motion be nearly within your grasp, only to have them drift on further down the trail.  After Isaac Vallie-Flagg emerged victorious in his long-awaited UFC debut over Yves Edwards at UFC 156 in February of 2013, the course he had been envisioning for years began to unfold.

While “Ike’s” name couldn’t be found at the top of the rankings or lists throughout the sport, the Ann Arbor native had long since accomplished one of the key elements to holding his own in the fight community…respect. The word around Jackson/Winkeljohn MMA – one of the most revered fight gyms in the world – was that the scrappy veteran was the real deal; he just needed the right stage to prove himself on.

Where his game has never been the type to carry flash or dazzle, there is simply no denying the unique brand of toughness Vallie-Flagg possesses. It was something Coach Greg Jackson picked up on right away – and in signature Jackson fashion – he found a way to help his fighter embrace a concrete aspect of his game.

“Cub Swanson and I were talking to Greg Jackson a while ago and he broke it down for us,” Vallie-Flagg explained. “He said there are three types of people in this sport. There are athletes, martial artists and fighters. He said two great attributes we both have comes with us being good athletes and being tough fighters. Then he said he would take fighters over athletes and martial artists every day because he can’t teach the toughness part, but he can teach the rest of it.

“I really enjoy being in there. I just enjoy the fight. I think it’s fun to compete with another person in that fashion and really find out who is the best man on that night. Granted, it’s a competition, but I love to fight. It’s fun to get out there and mix it up and our sport allows us to trade punches in a safe legal environment. What is better than that? When I walk out there and the fight is on, I’m pleased as punch just to be there. I’m happy to be fighting.”

That said, the Michigan-born scrapper set about plying his trade on any stage he could find and managed to rack up an impressive 10-fight unbeaten streak.

Based on that success and his home in Strikeforce merging with the UFC upon closing its doors in January of 2013, Vallie-Flagg finally saw the opportunity he had been waiting for materialize. Not only was he getting to showcase his skills inside the Octagon, but the fight would come against a pioneer of the sport and someone he deeply respected in Edwards. The Albuquerque transplant knew they were going to put on a war for the fighting faithful in Las Vegas.

After 15 minutes of back and forth exchanges, Vallie-Flagg edged out the American Top Team staple via split decision. In that moment he had victory, but it was just a small taste of something he wanted a lot more of, and he wouldn’t have to wait long for his next assignment to come down the pipe. The UFC would line him up to face another veteran in Sam Stout at UFC 161 in Winnipeg, but a back injury suffered in training would bring the progress he had made to a grinding halt.

Fast forward 11 months and one back surgery later, and the returning lightweight is looking to get back on track. He will face upstart Elias Silverio at UFC Fight Night in Georgia on January 15, and once again, the chance to establish himself in the lightweight ranks is upon him. But this time it’s different…much different.

Where his previous campaign saw a Vallie-Flagg looking to find a place to fit in, this stripped down version of the full throttled slugger has a new fire burning inside. He’s looking to smash his way into one of the deepest divisions under the UFC banner and he intends to get there by any means necessary.

“This is a show and prove for me,” Vallie-Flagg said. “I want to earn my place. I’m not here to be a flashy guy. I’m not off a reality show. I’m here to fight. I want to earn the respect from the other fighters and I want the people who tune in to watch be excited to see me fight again. This year is going to mean everything to me. This year is all about me really showcasing what I can do. The other day in the gym “Cowboy” (Cerrone) was saying how he’s never seen me so hungry for a fight.

“I’m ready to do this. I think people may be overlooking this fight because it’s not a bigger name. Elias Silverio doesn’t have a high profile, but he’s a hungry kid too. We are going to stand and bang. I’m approaching this fight the same way I would be if there were a title on the line. I’m hungry as hell for it. I want to win the fight in impressive fashion over this tough kid.

“This fight is a chance for freedom again,” he added. “It’s the coolest feeling in the world and I don’t even know how to describe it. I believe I deserve to be in the UFC and this is another chance to prove it’s where I belong.”