"I respect the hell out of Yves because he’s been one of my favorite
lightweights for a while, but I also see a couple flaws in his game that
I feel I can exploit and I’m gonna try and do it." - Isaac Vallie-Flagg 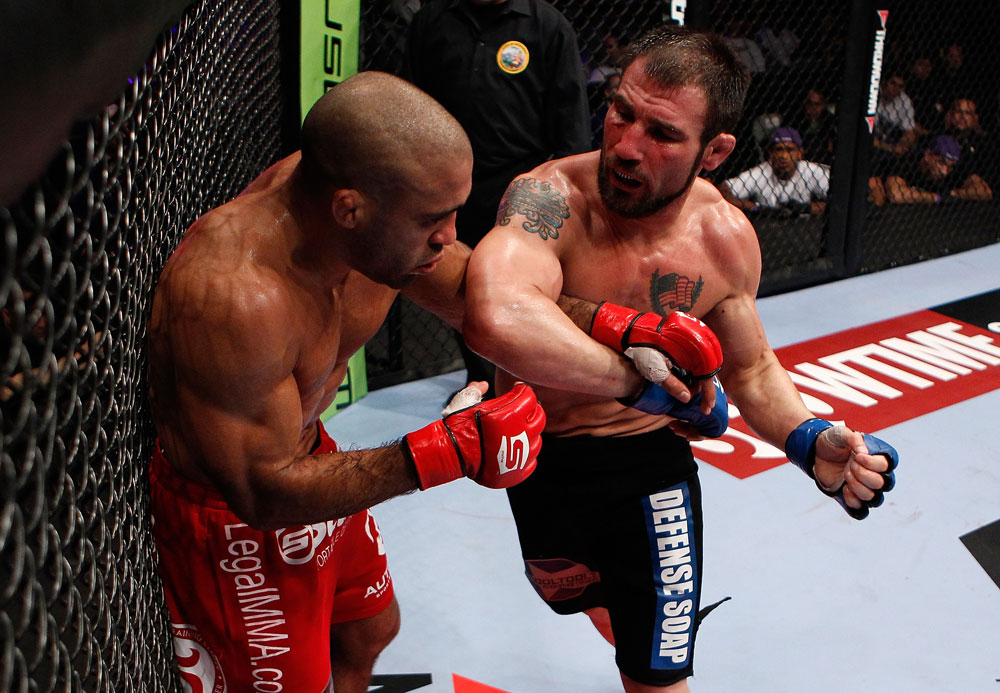 In talking with Isaac Vallie-Flagg before the biggest fight of his decade-long career last September against Adriano Martins, the veteran lightweight wasn’t about to let the moment get to him. Yes, he had finally made it onto the main card and fight poster in Strikeforce, but as he pointed out, good times, just like bad times, don’t always last.

“I’m generally a pretty even keeled person in my life,” he said. “I try not to go up or down about anything. I’ve learned a lot of life lessons and I’ve learned that every time there’s a good time that there’s that saying ‘this too shall pass,’ and that goes for good times and bad times. I’m very excited when I win fights and things go well for me, but I know that this too shall pass, so I try not to blow it out of proportion.”

Good call. 12 days after he spoke those words, that biggest fight of his career was canceled, along with the entire event.

“I was bummed out, but I said it’s just another fight and there are things that are gonna come along down the road, so I wasn’t letting it affect me too much,” he recalled. “But it’s always kind of a bummer to put in a couple months of hard work and then have everything fall apart at the last minute.”

Within four months, Strikeforce closed shop, leaving Vallie-Flagg wondering what was next for him, a trip to the UFC, or a return to the local circuit. Sure, he was unbeaten in two Strikeforce fights, most recently defeating highly-regarded JZ Cavalcante in May of 2012, and he hadn’t lost a fight since 2007. But in situations like this, it’s best to not count your chickens before they hatch. So he didn’t…for the most part.

“I’d have days when I’d be like ‘man, I gotta come over with my record and coming off a big win over JZ,’ and then I’d be like ‘well, they haven’t called me yet, so I don’t know what’s going on.’ I’d go back and forth with it. But I tried to stay as confident as I could the whole time. I tried not to let those thoughts enter my head too much. I just kept focusing on getting better and waiting to get a call from the UFC.”

Since you’re reading this now, the suspense factor can go out the window – Vallie-Flagg got that call from the UFC, and deservedly so. A pro since 2003, the Ann Arbor, Michigan native came up tough, going 3-3 in his first six fights. But since his submission defeat to Rudy Bears in July of 2007, he has gone 10-0-1, with the transformation owed to his work ethic and the examples set by his teammates at the Jackson-Winkeljohn MMA gym in Albuquerque, many of whom – including Joe Stevenson, Cub Swanson, Leonard Garcia, Donald Cerrone, and Kyle Noke - he called roommates at one time or another.

“I got to learn from some really talented guys, and after my last loss, it wasn’t the greatest feeling and I said I don’t ever want to feel that way again,” said Vallie-Flagg. “So I went back to the gym and started working my butt off, and I never quit working.”

The results are there, so even if you may not have heard of him yet, you’re going to after his UFC 156 fight with Yves Edwards this weekend. He doesn’t mind being under the radar at the moment though.

“I like it, I think it’s cool,” he said. “I relish being the underdog and the new guy and stuff like that, and fighting who I’m fighting. I’ve been in this situation before, and I really dig that situation. I think it makes me hungrier.”

And with the resurgent 36-year-old Edwards winning five of his last seven, and Vallie-Flagg’s hot streak being even hotter, this prelim bout has show-stealing potential. So as far as the UFC newcomer is concerned, there’s no better way to make a name for yourself.

“I respect the hell out of Yves because he’s been one of my favorite lightweights for a while, but I also see a couple flaws in his game that I feel I can exploit and I’m gonna try and do it,” said Vallie-Flagg. “He knows how to take advantage of any weaknesses you’re showing, he is dangerous, and he is good in every respect. I just see Yves as another opponent and as a way for me to make my mark in the UFC. I’m not getting brought in and fighting from the bottom; I’m getting brought in and fighting right there in the mix already.”

It’s been a long time coming, and you can guarantee that this one won’t be getting canceled. But in keeping with his even-keeled personality, Isaac Vallie-Flagg isn’t satisfied with just getting to the UFC; what will make all the struggles over the years worth it is only one thing: a win.

“Getting there is awesome, especially on this kind of a card, but getting a victory is when I really feel validated, like I’ve finally gotten to where I want to be,” he said. “And that being said, I know that the hard work doesn’t stop when I get there. I know it just gets harder from there.”